After an intra-day dip into bear market territory in May, the S&P 500 finally entered a bear market earlier this month. We saw some moderation of fear today but as you can see from the Fear and Greed Index below, we are still in extreme fear territory. 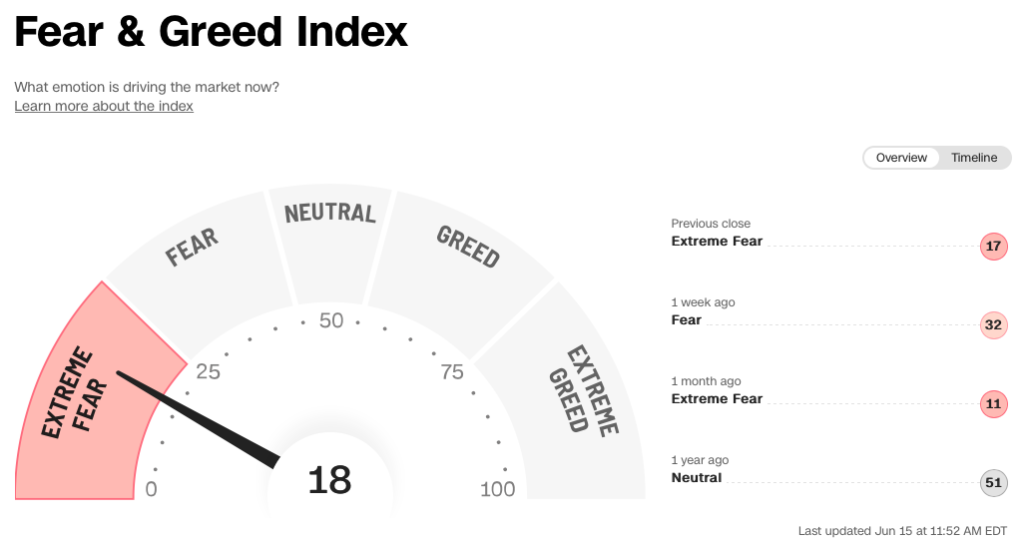 As I write this, the S&P 500 is down 8.8% for the month, while our model portfolio has given back 3.5% of its gains after a strong May where we saw the portfolio go up 5.5%. While several of our positions are in the red, the portfolio was helped by continued strength in our energy positions and the short side of the portfolio where every position is showing double digit gains. The founder and CEO of Continental Resources (CLR), the oil and gas production company we wrote about in our August 2020 newsletter, wants to take the company private for $70 per share.

His insider purchases in 2020 that inspired me to write about the company and add it to the model portfolio were at an average price of $16.87. He also purchased shares again this March at an average price of $59.27. The board has not yet accepted the offer and the stock jumped above his offer price this week, implying investors want to see a higher price for the deal. Harold Hamm and his family trust already own 83% of Continental’s stock. The stock is now up 320% since we added it to the portfolio and I think this deal will be successful. Unless crude oil prices go up a lot in the next few days, I would be surprised if he revises his offer higher by a significant amount.

Market conditions combined with the renegotiation of the Anaplan (PLAN) deal by Thoma Bravo has pushed up spreads on several private equity deals including,

There are some other concerns with some of these deals including financing for the Citrix deal and exposure to Russia/Ukraine for Tenneco. However a basket of these deals should generate good returns based on what I have seen during previous distressed market conditions. The situation will need to be reassessed periodically and probabilities updated. All bet are off if we end up in a situation like 2008-2009 where both credit and equity markets froze, especially during the fourth quarter of 2008.

Instead of focusing on a specific deal or idea for the mid-month update, I wanted to discuss a framework that I used during the March 2020 bear market and that I updated for my personal portfolio earlier this week. We have an interesting idea for the August newsletter that we are working on right now and as usual we will include one spotlight idea on the long side and one on the short side in the monthly special situations newsletter.

In our Don’t Average Down, Average Up Instead article we wrote in April, we talked about not averaging down on positions that had dropped in price unless that decision was made a priori or on account of general market conditions. When adding technology stocks like Twilio (TWLO) and Doximity (DOCS) to our model portfolio, we had indicated that we were concerned about market volatility and want to build those positions over time. I think the time has come to start adding to positions. This bear market is far from over but it is impossible to pick the tops or bottoms of markets. The bear market playbook I have set up includes three sections.

Considering how quickly we came out of the March 2020 bear market by kicking the can down the road through massive stimulus, I only got to implement part of my bear market playbook. I suspect this time will be different and that we will have more time to build these positions.