Insider Weekends: A Week Of Repeats With Purchases Of Vertex And B. Riley

Coming off an earnings related quiet period, we were expecting a rebound in insider transactions but this pace of buying was surprising. Several companies where we have seen insider buying in the past, saw insiders buy again last week. Vertex Pharmaceuticals (VRTX) and American Assets Trust (AAT) both made the top 5 list last week and we also saw insider buying by the CEO of B. Riley Financial (RILY) but the size of his purchases were not large enough to make our list. Two of these three stocks have done very well since insiders starting buying.

Sell/Buy Ratio: The insider Sell/Buy ratio is calculated by dividing the total insider sales in a given week by total insider purchases that week. The adjusted ratio for last week dropped to 14.07 In other words, insiders sold more than 14 times as much stock as they purchased. The Sell/Buy ratio this week was favorable compared to the prior week when the ratio stood at 24.79. 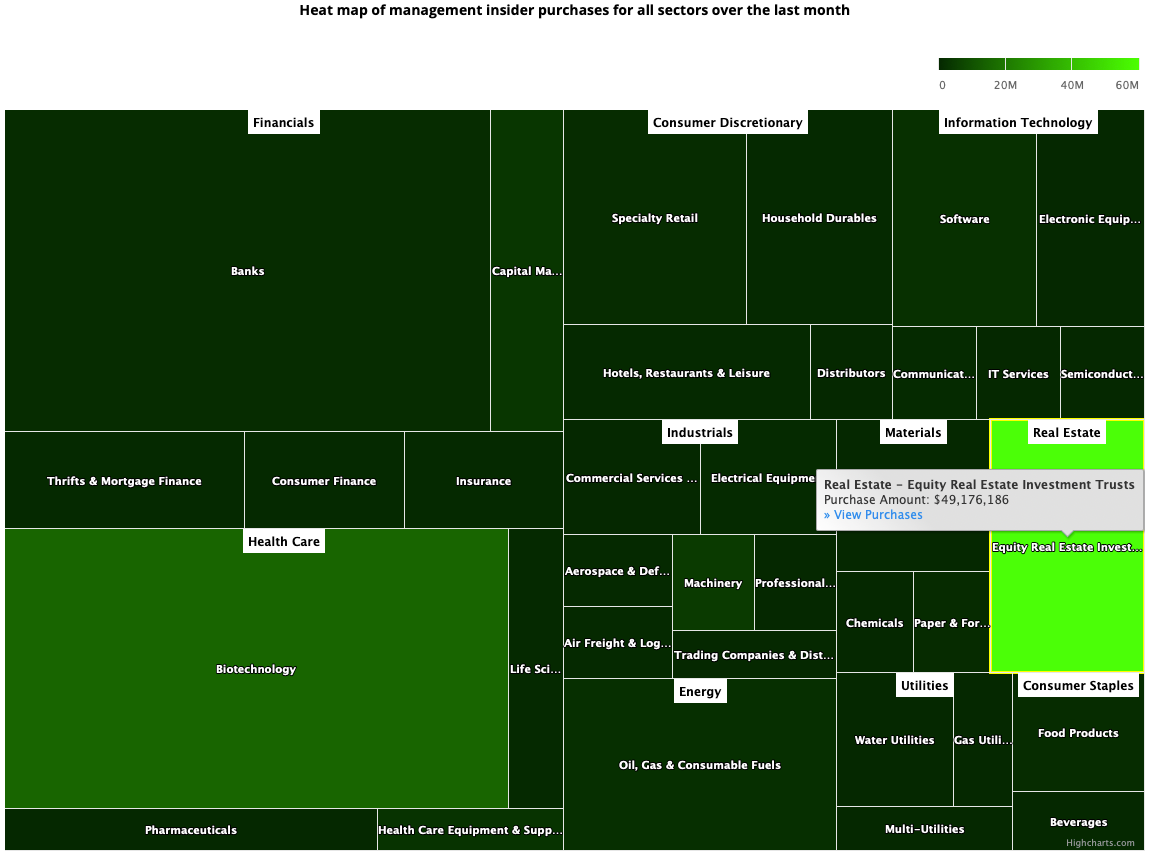 Note: As mentioned in the first post in this series, certain industries have their preferred metrics such as same store sales for retailers, funds from operations (FFO) for REITs, and revenue per available room (RevPAR) for hotels that provide a better basis for comparison than simple valuation metrics. However, metrics like Price/Earnings, Price/Sales and Enterprise Value/EBITDA included below should provide a good starting point for analyzing the majority of stocks.

Sun Communities owns and operates over 300 manufactured home communities and RV resorts. The company both rents and sells single family homes in its communities. Mr. Shiffman has been a director and executive at the company since its inception in 1993. In the 11 years that we have been tracking insider transactions, we have not seen an open market purchase by Mr. Shiffman. In fact, he was a seller of the stock as recently as this May as you can see here.

In addition to this purchase, he also received 48,000 shares through a distribution from a grantor retained annuity trust and required 47,640 shares from the same trust by substituting assets of equal value. He also gifted 44,000 shares to irrevocable trusts for the benefit of his spouse, children and grandchildren.

You can view the list of recent insider transactions for Sun Communities, Inc. here.

Director Mitchell P. Rales acquired 250,200 shares of this diversified technology company, paying $46.19 per share for a total amount of $11,56 million. Mr. Rales increased his stake by 27.20% to 1,170,201 shares with this purchase. 200 of these shares were purchased indirectly through a trust.

You can view the list of recent insider transactions for Colfax Corporation here.

Vertex Pharmaceuticals caught my attention after Mr. Sachs’ first insider purchase in November 2020 when he purchased $3.26 million worth of stock. The company was the subject of our December 2020 Special Situations Newsletter where we wrote the following about his purchase,

Mr. Sachs joined the Board of Vertex in 1998 and is the Board’s lead independent director. From 1993 to 1998, Mr. Sachs has held executive positions in Xylogics, Inc., Bay Networks, Inc., and Stratus Computer, Inc.

He is a General Partner at Charles River Ventures, a venture capital firm he joined in 1999. CRV was founded in 1970 to commercialize research that came out of MIT. It has total assets of over $4 billion. Apart from Vertex Pharmaceuticals, Bruce Sachs holds 11 other board and advisor roles including Member of the Board of Directors at iControl Networks, and Member of the Board of Directors at Watercove Networks.

The insider purchase by an independent director of the company who has served on the board for well over 20 years is a strong positive signal. In many ways Vertex reminds me of Gilead Sciences, a company that benefited from its HIV drugs for a number of years and then enhanced its pipeline through acquisitions. The key difference with Vertex appears to be that its CF franchise is still growing rapidly while Gilead’s growth from both its HIV and Hep C drugs has moderated significantly.

The stock has unfortunately not done well since Mr. Sachs purchase as concerns about its pipeline beyond its Cystic Fibrosis (CF) franchise have dogged the stock. I wrote the following about the company in our last monthly newsletter,

Vertex Pharmaceuticals perked up a little after reporting Q2 revenue increased 18% year-over-year to $1.8 billion on account of sales of its cystic fibrosis
drug KAFTRIO in Europe and the continued strong performance of TRIKAFTA in the U.S. The company also raised its full-year 2021 guidance to $7.2 to $7.4 billion from its previous guidance of $6.7 to $6.9 billion in revenue. The key question for Vertex is the strength of its pipeline outside its cystic fibrosis franchise. The company currently has four drugs in phase 2 development for kidney disease, pain, sickle cell disease and beta thalassemia.

Despite the recent performance of the stock, I remain optimistic about the company long-term and have the stock in both our model portfolio as well as my personal portfolio.

You can view the list of recent insider transactions for Vertex Pharmaceuticals Incorporated here.

Chairman & CEO Ernest S. Rady acquired 49,563 shares of this diversified REIT, paying $37.10 per share for a total amount of $1.84 million. These shares were purchased indirectly through a trust.

You can view the list of recent insider transactions for American Assets Trust, Inc. here.

You can view the list of recent insider transactions for Kemper Corporation here.

Shares of Alphabet were sold by 4 insiders:

Shares of the company that is known for its Invisalign product were sold by 8 insiders:

You can view the list of recent insider transactions for Align Technology, Inc. here.

Shares of this social media company were sold by 2 insiders:

Shares of this diagnostics & research company were sold by 3 insiders:

You can view the list of recent insider transactions for Thermo Fisher Scientific Inc. here.

Disclaimer: I hold long positions in Vertex Pharmaceuticals (VRTX), B. Riley (RILY) and Gilead Sciences (GILD). Please do your own due diligence before buying or selling any securities mentioned in this article. We do not warrant the completeness or accuracy of the content or data provided in this article.