On Monday, May 11, 2020, according to Bloomberg, Amazon.com (AMZN) had discussed a potential takeover of AMC Entertainment Holdings (AMC). At a time when the COVID-19 pandemic has resulted in a significant increase in demand for meal-delivery business, Uber Technologies (UBER) announced that it is seeking to acquire Grubhub (GRUB). According to Reuters, on May 12, 2020, Hedge fund Elliott Management publicly called on Alexion Pharmaceuticals (ALXN) to sell itself, a week after Alexion Pharmaceuticals entered into a merger agreement to acquire Portola Pharmaceuticals (PTLA). On May 13, 2020, according to Bloomberg, Billionaire Anil Agarwal announced that he plans to take Indian commodities giant Vedanta (VEDL) private in order to simplify his investments. Tetraphase Pharmaceuticals (TTPH) received an unsolicited bid from Melinta Therapeutics almost two months after entering into a merger agreement with AcelRx Pharmaceuticals (ACRX).

Most of these potential deals could make sense but I am perplexed by the rumor of Amazon.com wanting to acquire AMC. I could see the synergies with Amazon.com acquiring Whole Foods but fail to see it with a leveraged movie theatre company. Uber Eats was the fastest growing division for Uber pre-crisis and it makes sense that they want to try to gain additional market share by acquiring a competitor like Grubhub. Considering Grubhub acquired Yelp’s Eat24 meal delivery service in 2017, it is possible that regulator might look at the deal closely if this rumored acquisition goes through. Although with Doordash and Postmates, there is plenty of competition in this space.

In the deal updates section, Legg Mason received approval from its shareholders for its merger with Franklin Resources, Standard Diversified (SDI) and Turning Point Brands (TPB) were granted early termination by the FTC under the HSR Act and WABCO Holdings (WBC) and ZF Friedrichshafen AG received regulatory clearance from the Chinese State Administration for Market Regulation.

While not exactly a deal update, investors analyzed the language in Simon Property Group’s (SPG) 10Q filing for any hints about how the mall REIT was thinking about its acquisition of Taubman Centers (TCO). An investor that goes by the moniker Wolf of M Street on Twitter highlights some of this change in language in this tweet. 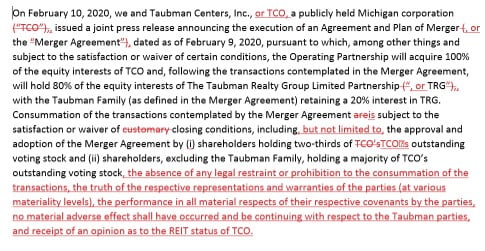 The spread on the deal spiked sharply after this 10Q for the third quarter ended March 31, 2020 was filed as you can see from the spread history chart below and from our Weekly Spread Changes table below.