Insider Weekends: Insiders Step Up Their Buying During Market Downturn

Welcome to edition 506 of Insider Weekends. With fears of the COVID-19 virus spreading worldwide, the markets took a large hit last week with the S&P 500 down nearly 9% in a single week. We wrote the following three weeks ago on February 9th,

“With the novel coronavirus risk continuing to unfold, I am surprised insider were not selling even more. Beyond the direct impact to the second largest economy in the world, we are now starting to see second order effects due to the impact on the global supply-chain. It was not surprising to hear that a large number of car manufacturers had extended factory closures in China but the second order effects became evident when Hyundai suspended car production in South Korea due to a shortage of parts.

For those that were invested during the SARS pandemic and the Ebola epidemic, it may seem like we will get through this one relative unscathed just like we did the last ones but it is probably a good idea to take risk down a notch or buy some protection in case the infection continues to spread across the globe.”

With community spread in the U.S., we have now gone past the risk of second order effects and are now going to experience first order impact, whether perceived or real. I expect to see further market declines and if that does transpire, there would be some interesting opportunities in the weeks ahead. I started positioning my portfolio for these events a couple of weeks ago and will elaborate more in a premium post this week.

At risk of missing some opportunities on the long side, I would prefer to stay patient and wait for the situation to unfold. Insiders on the other hand have stepped up their buying as they usually do in downturns. They are probably early this time but their buying will bring some interesting opportunities to light. The top insider buys this week are mostly repeat purchases by insider who had already been buying before this downturn and the buying is concentrated in the energy sector.

Sell/Buy Ratio: The insider Sell/Buy ratio is calculated by dividing the total insider sales in a given week by total insider purchases that week. The adjusted ratio for last dropped to 7.13. In other words, insiders sold more than 7 times as much stock as they purchased. The Sell/Buy ratio this week compares favorably with the prior week, when the ratio stood at 46.59. 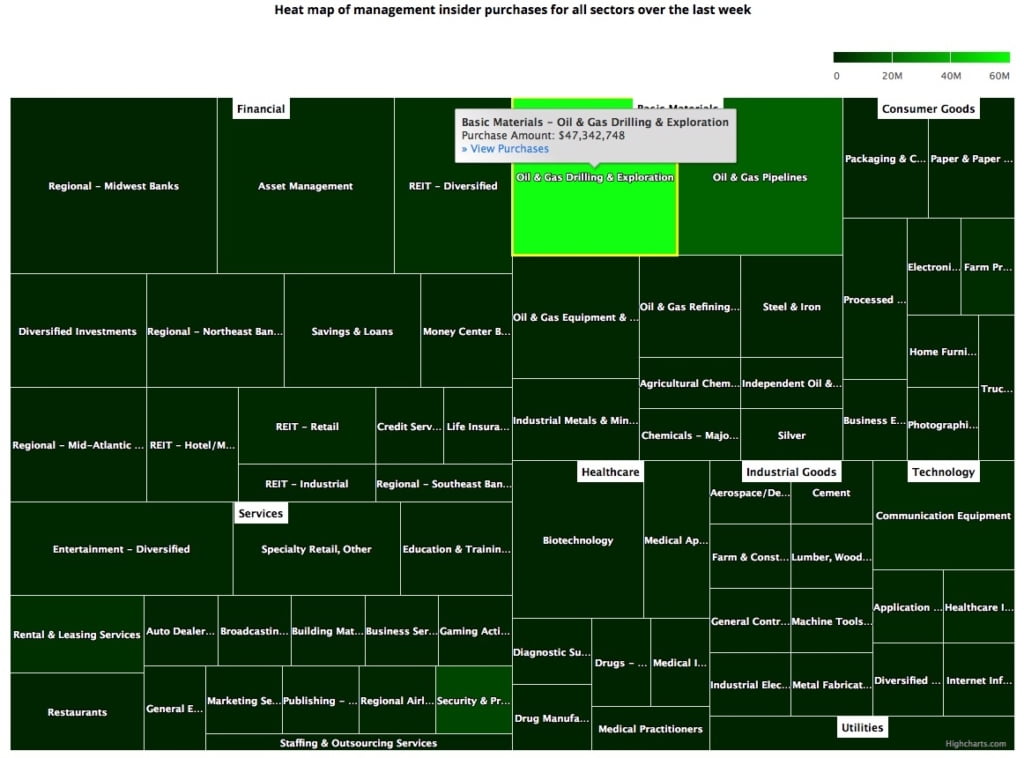 Shares of this oil & gas midstream company were acquired by 2 insiders:

We wrote the following about Kinder Morgan last November,

Mr. Kinder has been active buyer of Kinder Morgan every time the stock has dipped to around $20 or below. The stock was below $20 for the first half of this year and he was a very active buyer then. He also purchased 700,000 shares for $13.91 million in late August.

Revenue has declined in each of the last two quarters and the company missed both top line and bottom line estimates. After cutting its dividend in 2016, the company is once again growing its dividend payout and the annual payout now is $1, translating to a 4.88% yield at a 103% payout ratio.

And the following in February 2019,

We reported on $3.87 million of purchases by Mr. Kinder in the week prior and he more than tripled his buying last week. With the stock rebounding strongly off the Christmas Eve lows and trading close to a 52 week high, it is interesting to see Mr. Kinder continue to purchase shares.

Kinder Morgan was one of the first companies in the energy industry to favor the Master Limited Partnership (MLP) structure that allowed companies to pay no corporate taxes and pass all its profits to investors as distributions. More than four years ago, it was also one of the first to abandon the structure by merging its four pipeline companies into a single one and adopting a traditional C corporate structure. With changes in the tax structure in 2018 pushing the corporate tax rate well below the top individual tax rate, the MLP structure was no longer as tax efficient as it once was and we have seen a number of MLP companies converting to C corporations in 2018.

You can view the list of recent insider transactions for Kinder Morgan, Inc. here.

You can view the list of recent insider transactions for The GEO Group, Inc. here.

Director Randa Duncan Williams acquired 308,000 shares of this oil & gas midstream company, paying $24.40 per share for a total amount of $7.52 million. These shares were purchased indirectly through various trusts.

We wrote the following about Ms. William’s purchases in December 2019,

The entire sector has been hard hit in the last five years as you can see from the chart below and some of the larger midstream companies have used the downturn to increase their acquisitions, including those of bankrupt smaller companies, which is often a sign that the bottom is near.

One way to avoid betting on a single midstream company, increasing the distribution yield and not worry about K-1 tax forms, is to consider an instrument like the Alerian MLP ETF (AMLP). It has over $7 billion in assets under management, is fairly liquid (average daily volume of 21 million shares traded over a three month period), sports a dividend of 10% and has an expense ratio of 0.85%. The ETF gives you exposure to both Enterprise Product Partners (its top holding) and NuStar Energy but does not include Kinder Morgan as KMI is no longer a master limited partnership (MLP) but has a traditional C corporation structure. 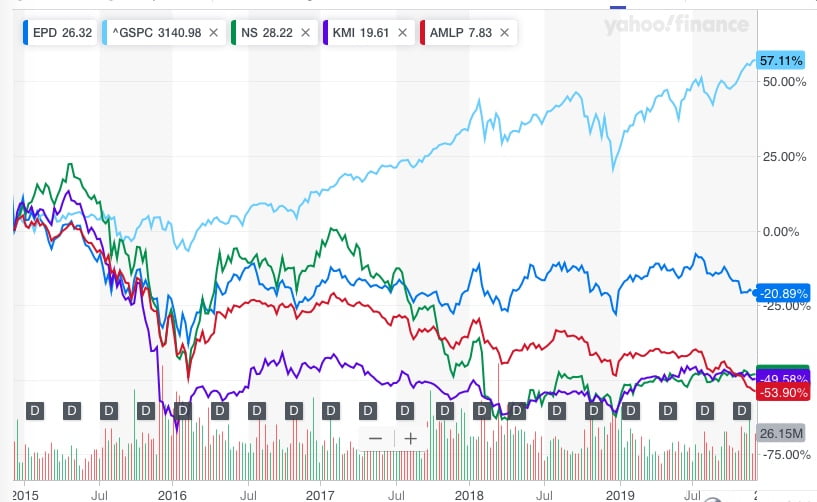 Besides paying an expense ratio that is higher than most ETFs, the other downside of the AMLP ETF is a concentrated portfolio of just 22 positions and MLP companies increasingly choosing to convert into C corporations thanks to the lower corporate tax rate that went into effect in 2018. The ETF has performed worse than EPD, KMI and NS over the last 5 years and especially during the last year.

You can view the list of recent insider transactions for Enterprise Products Partners L.P. here.

Chairman, President Edward J. Shoen acquired 5,420 shares of this do-it-yourself moving and storage operator, paying $343.12 per share for a total amount of $1.86 million. These shares were purchased indirectly by Willow Grove Holdings LP.

Mr. Shoen also purchased over $1 million worth of stock two weeks ago. We wrote the following about the company after his purchase,

Amerco offers the U-Haul line of self-moving trucks, equipment related to moving and self-storage. While the self-storage revenue has been growing and now is their second biggest revenue generator, it represented only 11.5% of total revenue in Q4 2019. Their core self-moving trucks business accounts for more than two-thirds of total revenue and saw a modest 1% drop year-over-year.

While the stock appears cheap at just over 8 times EBITDA it has been cheap for a long time and is close to the high end of its five year EV/EBITDA range. This vote of confidence through insider buying is encouraging but I would like to see the core self-moving trucks business improve before I would get interested in Amerco, especially in light of Amazon.com’s decision to stop using their trucks for last mile deliveries.

You can view the list of recent insider transactions for AMERCO here.

Shares of this agribusiness and food company were acquired by 3 insiders:

It looks like three different insiders decided to step up and buy share last week after the purchases by the CFO and the Chief Legal Officer in the week prior. The stock is down significantly from where these insiders started buying. We wrote the following about Bunge last week,

Insider purchases by the CFO or the Chief Legal Officer usually pique my interest and when I see both of them buying, I pay attention. Looking through the management of the company, I was struck by the fact that most of them joined the company in 2019.

It appears that after the company brought in Gregory Heckman as their interim CEO in January 2019 and then made him the permanent CEO in April 2019, he brought in an entirely new management team into the company. Both Mr. Heckman and the CFO Mr. Neppl were former executives at ConAgra Foods. The change was much needed has Bunge’s stock is down 35% over the last 5 years even as the S&P 500 rose 59%. Revenue has declined for six quarters in a row although to the credit of the new management team, earnings have improved in 2019.

This 202 year old company is the world leader in oilseeds (soybeans, sunflower, etc.) processes and its businesses range from grains to sugar. The company has a presence in North America, Europe, Brazil, Argentina, India and China.  The company was reviewing strategic alternatives last year and it is possible the insiders see a silver lining at Bunge that may not be readily evident to investors who have probably given up on the company after years of underperformance.

You can view the list of recent insider transactions for Bunge Limited here.

You can view the list of recent insider transactions for Enphase Energy, Inc. here.

You can view the list of recent insider transactions for Extra Space Storage Inc. here.

Shares of this wireless communications infrastructure provider were sold by 2 insiders:

You can view the list of recent insider transactions for SBA Communications Corporation here.

Director Charif Souki sold 4,001,139 shares of this natural gas company for $3.27, generating $13.1 million from the sale. These shares were sold indirectly through a trust.

You can view the list of recent insider transactions for Tellurian Inc. here.

Shares of this electric public utility holding company were sold by 5 insiders:

You can view the list of recent insider transactions for American Electric Power Company, Inc. here.

Disclaimer: I hold a long position in AMLP. Please do your own due diligence before buying or selling any securities mentioned in this article. We do not warrant the completeness or accuracy of the content or data provided in this article.

Merger Arbitrage Mondays – Multiple ‘Deals In The Works’ Get Confirmed