2022: A Year in Review and the Launch of a New Website

Happy New Year. 2022 was a challenging year for many market participants and also challenging on the personal front for some people I know. It is often difficult to extricate the personal from the financial and they each have an impact on the other. As we venture into 2023, it is helpful to remember that some of the more important things in life are health, family and friends. A financial house in order helps us with those important things and achieve long-term goals. Challenges we encountered will help us grow stronger and each experience informs our future choices as discussed in our Pattern Matching article.

We are excited for a soft launch of a new version of InsideArbitrage this coming weekend. We have been working on the new website for the better part of the fourth quarter of 2022 and have discussed some of the new features of the website below. The launch will allow us to continue building new tools that have been in the pipeline and I am very excited by what we have planned for 2023.

Portfolio returns are often driven by outliers and we closed a position in one of our outliers, Continental Resources (CLR), when founder and majority shareholder Harold Hamm took the company private in late 2022. The position generated a gain of 330% over a holding period of almost 28 months. We wrote about the company for the first time in our August 2020 Special Situations newsletter and then again in mid-2022 when Harold Hamm made an offer to take the company private. In our July 2022 Mid-Moth Update discussing four merger arbitrage situations with Contingent Value Rights (CVRs), I wrote the following,

Commodities and especially oil had held up well during the first half of this year but this fear of a deep and long recession is putting a damper on most commodities and especially “Dr. Copper”, which hurts our positions in Freeport-McMoran (FCX) and energy stocks like Diamondback Energy (FANG) and Continental Resources (CLR). Continental is being held up by Harold Hamm’s offer to take the company private at $70 per share and I still believe that the company will either accept that offer or negotiate a deal at a slightly higher price. The stock closed at $63.16 on Friday.

Another winner for us was a company we did not add to the model portfolio because of the unique situation related to the merger but that I personally purchased after writing about it in an article titled May 2022 Mid-Month Update: Merger Arbitrage + Spin-Off Combo Deal. I have moved this article outside our paywall to allow you to read it. Both the arbitrage and the spinoff worked out great and this was one of those rare situations where all three of the event-driven strategies we follow including merger arbitrage, spinoffs and insider transactions came together. Insiders of Biohaven (BHVN) were buying the stock before the merger was consummated and were buying the spinoff post-merger.

We decided to short WeWork (WE) in early 2022 when the stock was trading at $6.40 and closed the position on November 30, 2022 for a gain of 57%. I personally was short the company through put options expiring in December 2022. Despite the gains, I was a little early in closing the position and gains would have been much higher if I had waited a few more weeks as the stock is now trading at $1.33. I wrote the following about WeWork in the March 2022 Special Situations newsletter,

Turnaround situations rarely turn around and if they happen to be leveraged companies, the probability goes down even more. Add a money losing operation that is seeing increasing cash outflows combined with shrinking revenue and you have a potential disaster.

WeWork is currently headed by Sandeep Mathrani, the former CEO of General Growth Properties. GGP Inc was a real estate and shopping mall company that had just undergone a Chapter 11 bankruptcy when Mathrani took over in 2010. Mathrani was able to transform the company, eventually selling it to Brookfield Property Partners in 2018.

Mr. Mathrani potentially stands a chance of doing the same thing at WeWork but doing so without wiping out debt and exiting capital leases in a bankruptcy is a tall order. At best WeWork is likely to languish at current levels and at worst, the stock could easily lose half its value in the coming months or go bankrupt if they can’t get the bleeding to stop.

We also shorted two other SPAC combinations and Gamestop in the model portfolio. Each of those positions generated gains of 55% to 78% and we are still holding them. The one short that has not yet worked for us is the luxury home builder Toll Brothers (TOL) that we shorted in late 2022. The position is down 16% because of a rise in home builder stocks during the last two months. I believe housing will remain weak in 2023 and expect the position to perform well this year.

Our biggest misses this year were a trio of technology stocks, Doximity (DOCS) and Nextdoor Holdings (KIND) and Twilio (TWLO)  from our “broken growth” watchlist discussed in the article January 2022 Mid-Month Update: SPAC Attack. These companies were down significantly from their peaks before we dipped our toes but we were much too early in getting in. We started each of them at half our position size (or even smaller) with the expectation that volatility is likely to continue in 2022 and that we will add to them at some point to bring them up to a full position. Each of these three positions were down 26%, 38% and 71% (ouch!) since we added them to the portfolio in the first half of 2022. I expect to add to them in the near future to make them full positions.

We also took a pretty big hit with a company we added in late 2021, Magnachip Semiconductor (MX), that was a Korean company with a failed merger. I had expected the company to use the money from the termination fee to start a large stock buyback or strike a new deal, like we have seen with a couple of other failed mergers in the past (Frontyard Residential and Aerojet Rocketdyne Holdings). The company did initiate an accelerated buyback in early 2022 and expanded the buyback program in late 2022. Unfortunately talks of a new deal appear to have faltered and the stock was down 49% in the model portfolio by the end of 2022.

When we started InsideArbitrage almost five years ago, we started with two strategies (merger arbitrage and insider transactions) and expanded to six strategies by 2022 including spinoffs, C-Suite transitions, stock buybacks and SPACs. We will be adding a seventh strategy with the launch of our new website this coming weekend.

Beyond the expansion of strategies, we have also added depth to our tools by building new custom screens and enhancing our symbol metrics page to include both insider transaction and buyback data. We wrote the following when we launched a screen called the “Spinsider” in April 2022,

In keeping with our commitment to deliver more value to premium members through new tools and analysis while holding the price of the premium service the same for over four years, we are rolling out a new screen called Spinsider. The Spinsider screen automatically identifies management insider buying in companies that were spun out of a parent. The screen can also be used to find parent companies with insider buying and can be modified to include insider purchases by 10% owners and Directors. This screen was modeled after our Double Dipper screen that identifies a list of companies that are buying back their shares while their insiders are independently buying stock on the open market for their own portfolios.

I met a couple of investors and friends for coffee recently and both mentioned that they really like our new weekly series called Friday Wrap that aggregates the most interesting content for the week. Our new daily series, called the InsideArbitrage Event Driven Monitor keeps our readers informed about news and events related to the various event-driven strategies we follow. I really enjoy digging into form 4 filings every night for the Event Driven Monitor as it is a good source of idea generation. I add these ideas to a watchlist with brief notes and then expand on them in our monthly newsletters or mid-month updates.

The new version of InsideArbitrage is going through a final QA process and we are getting ready to migrate the data this weekend to launch with a fresh new interface. The new website has been optimized for mobile use and we have also enhanced our user dashboard that allows subscribers to control which emails they would like to receive. The new user dashboard gives premium members the ability to track specific mergers, set up alerts for insider transactions and more.

One of the things about the new website that excites me the most is the integration of portfolios of “Gurus” based on their 13F filings with the SEC each quarter. We had integrated portfolios of event-driven fund managers into our Merger Arbitrage Spreads tool in the past and are now expanding to various other categories like value, growth, growth at a reasonable price (GARP), etc.

We have also built a custom screen of “Top Performing Insiders” for our premium members that allows them to screen for insiders that have a knack for getting the timing of their purchases right. A sneak peek at this screen from the new site is given below. 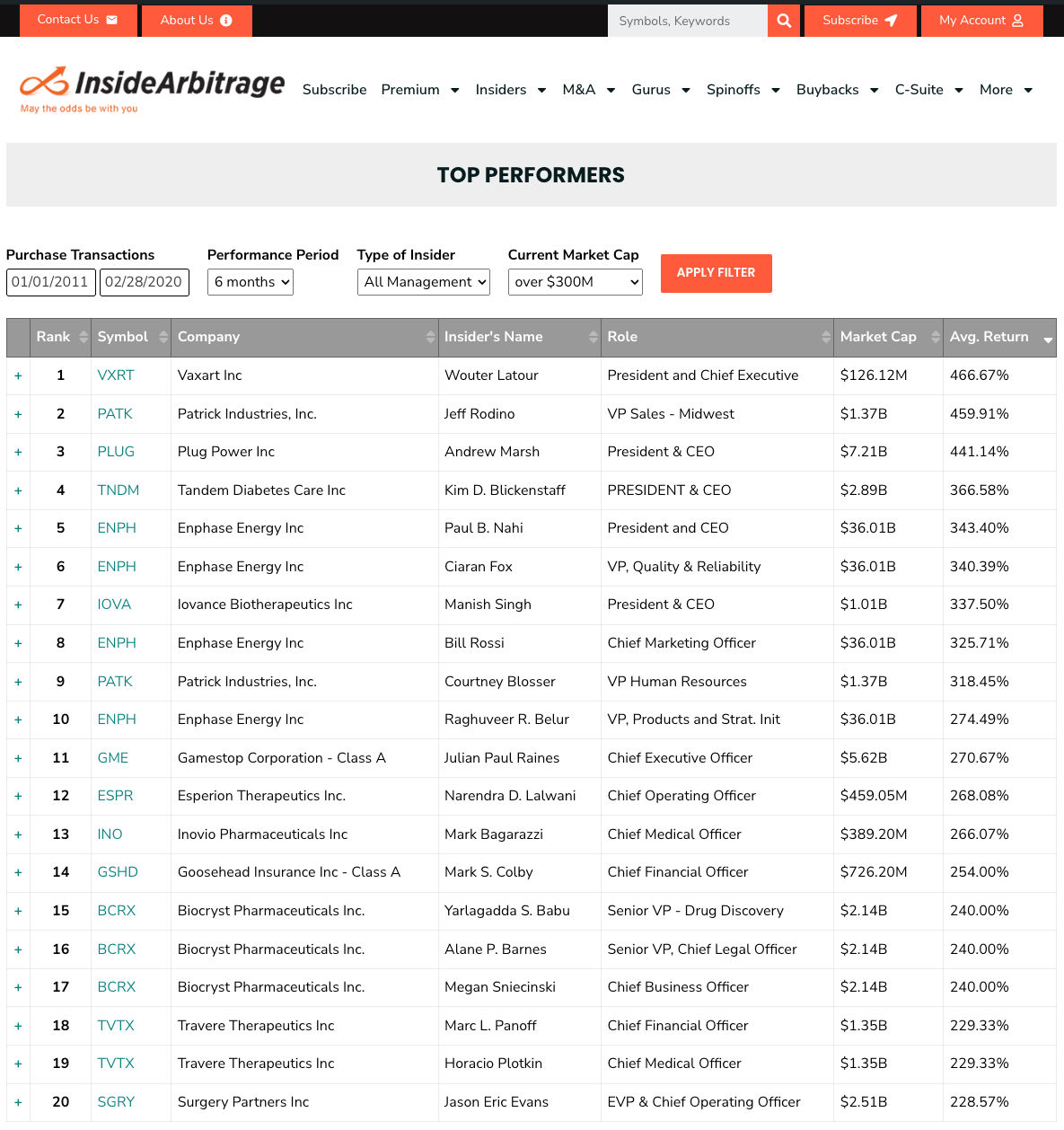 We have not changed the price of the InsideArbitrage premium service for five years. To allow us to continue to build the platform without external funding and deliver valuable content to you, we will be increasing the price of our service in mid-January. Existing subscribers will remain grandfathered in at their current subscription price and the new price will only apply for new subscribers starting January 15th. If you would like to subscribe to the InsideArbitrage Premium service and lock in your subscription before the new pricing goes into effect, you can do so here.

A lot of what we did with InsideArbitrage in 2022 was possible because I decided to quit my job at a San Francisco based healthcare company early in 2022 and decided to start focusing full time on InsideArbitrage. I had an amazing time helping build that healthcare company, participating in investor presentations to both strategic acquirers and private equity firms and then staying on for a year post-acquisition. I learned a lot and got a chance to work with some amazing colleagues.

After transition to InsideArbitrage full time, we were able to expand the team, grow revenue by nearly 50% (from a small base) in a challenging market environment and set up the platform for success in 2023 through new infrastructure investments. It was also exciting to see that several investors offered to invest in the company and I received one outright acquisition offer. While I am grateful for the interest, I’ve decided to continue bootstrapping the company and build an amazing idea generation platform for our subscribers.

I am also in the process of setting up a registered advisory service and towards that end completed the series 65 exam in late 2022. I look forward to managing money for clients once I receive approval from the state of California.

It was very exciting to achieve a key step in a long-term personal goal towards the end of 2022. I hope to share more about this in the coming months as I get closer to fully achieving this goal.

The thing I was most grateful for in 2022 was the support of family and friends as well as all the new connections I made through InsideArbitrage and finance twitter (FinTwit) that resulted in amazing conversations over coffee at various locations across the San Francisco Bay Area. None of this would have been possible without an amazing and dedicated team that has grown with me and the InsideArbitrage platform.