While having coffee with a fellow investor in downtown Mountain View last week, we got to discussing our investment process and it was interesting that while both of us preferred event-driven strategies like merger arbitrage, the process could best be described as opportunistic without being siloed into a specific style. I discussed this approach in an article titled A Season For Every Strategy a few weeks ago.

A lot of what we do as investors could be best described as pattern matching. We are constantly looking at new opportunities or existing positions though the lens of our past experience and using current information to see if we can spot familiar patterns. As humans, we are prone to making mistakes and our pattern matching process is likely colored by,

This 2015 paper by Mark Howe and Lauren Knott of City University of London, discusses the fallibility of memory in judicial processes and I found the following excerpts particularly relevant,

“… memory does not provide a veridical representation of events as experienced. Rather, what gets encoded into memory is determined by what a person attends to, what they already have stored in memory, their expectations, needs and emotional state. This information is subsequently integrated (consolidated) with other information that has already been stored in a person’s long-term, autobiographical memory. What gets retrieved later from that memory is determined by that same multitude of factors that contributed to encoding as well as what drives the recollection of the event.

This fallibility of memory includes not only the omission of details from the original experience, but extends to errors of commission including the creation of memory illusions. Memory illusions can be as simple as misremembering whether one saw a Stop sign or a Yield sign at an intersection to misremembering entire experiences such as being lost in a shopping mall as a child or even being abducted by a UFO.”

Given these human limitations, the question that comes up is whether machines are better equipped for pattern matching and making the investment decisions for us. I got a chance to experience this firsthand when a business partner and I embarked on a six year journey to dive deep into insider transactions to look for unique insights and strategies. After two years of traditional data analysis, we pivoted to using artificial intelligence or machine learning to see what the machine learning models could pick up. What was remarkable was that the machines within weeks picked up the same insights and strategies we found through the prior two years of traditional data analysis.

The machine learning algorithms we used back then are archaic compared to what is out there right now. Getting behind the wheel of a self-driving car or taking a ride in a robo taxi operated by Google’s Waymo or GM’s Cruise divisions makes you realize just how effective pattern matching can be. Obviously there are edge cases, where the machine encounters something it has not experienced before and things go wrong, leadings to bad outcomes including fatal crashes. Most programmers, including the ones that don’t work on machine learning, are acutely aware of edge cases.

Financial markets experience the equivalent of edge cases more frequently that one would expect. Nassim Nicholas Taleb discussed this in his books Fooled by Randomness and The Black Swan, where he described how “100 year flood” or black swan type of improbable events occur in financial markets with surprising frequency. None of the last four bear markets that I have invested through have been similar in their behavior. Each one unfolded differently in terms of duration of the downturn, the macroeconomic events that precipitated them and the interest rate environment during the downturn.

Beyond short-term movements that The Man Who Solved The Markets leverages at his quantitative trading firm Renaissance Technologies, the larger moves are significantly harder to predict even for the best pattern matching algorithms. It is not surprising to read towards the end of Gregory Zuckerman’s fascinating book that during a period of market turmoil in December 2018, Jim Simons reached out to his very human financial advisor, Ashvin Chhabra, for his advice. A small excerpt with their exchange from the book is given below. 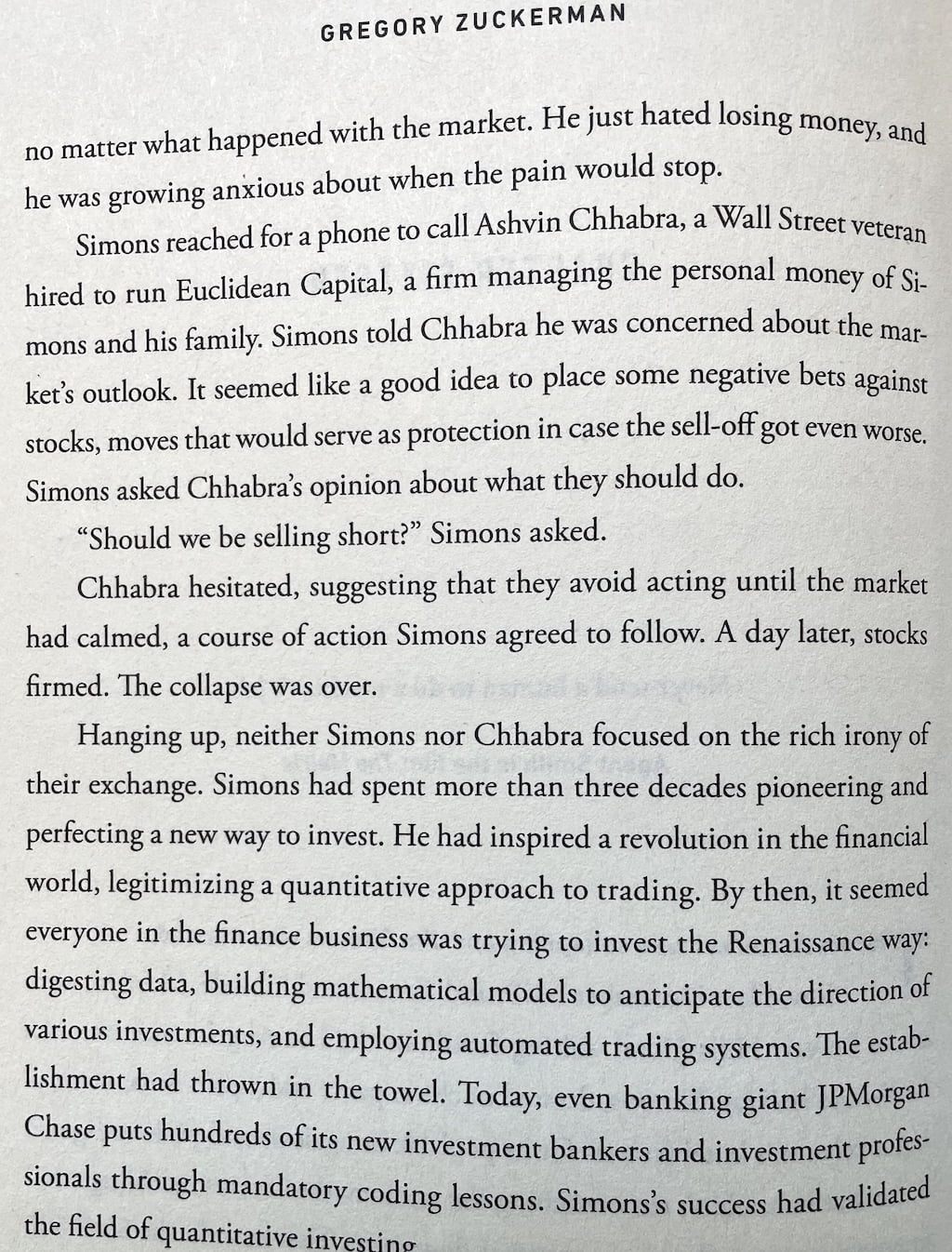 The Man Who Solved The Markets By Gregory Zuckerman

Quantitative strategies suffer from drawbacks including,

Having invested both ways, including writing algorithms that identified strategies and traded for us automatically, I believe humans are significantly better at pattern matching when it comes to larger moves in the market. This is not just my opinion and quantitative hedge funds significantly underperformed the MSCI World Index from 2016 to 2020. The silver lining for them is that they have performed much better so far this year thanks to bets against government bonds and long bets on energy. The ideal scenario would be a combination of machines and humans working together, each doing what they are best equipped to do.

How could we improve our pattern matching prowess given the inherent fallibility of our memory? Writing down your investment thesis, either publicly or in a privately, is incredibly helpful not just to help distill your thought process but also to go back and review what you were thinking when you made the investment. Having a fluid mind that can appreciate contradictory information and is not pigeon holed into a specific mode of thinking can also make a huge difference. I have often learned more from investments that did not work out than those that did. The pain of watching losses forces you to reassess your process and hopefully helps improve your internal pattern matching capabilities.

I think the next year is going to present significant opportunities in financial markets and pattern matching will be important to identify and take advantage of those opportunities.