A Season For Every Strategy

The process of investing, trading or speculation is an evolutionary process that over time, with enough longevity, helps the investor, trader or speculator achieve superior outcomes. It combines not just the experiences and aspirations of the individual partaking in the activity but also the investment environment they operate in. When I first started investing more than two decades ago, I fancied myself a value investor as many investor starting out on their journeys do. It is an easy right of passage with simple mantras of buy when things are on sale (blood in the streets, tide goes out, etc.) and remain patient waiting for opportunities that will eventually show up.

Over time, value investors inevitably run into value traps, realize the pitfalls of comparative valuation metrics (P/E, EV/EBITDA or my favorite EV/FCF) and for those that venture to determine the “intrinsic value” of a company, debate the use of WACC or a hurdle rate for the discount used in a discounted cash flow analysis (DCF) model. They also start realizing that the majority of short-term market movements are driven by psychology and there is a vast, deep chasm between their intrinsic value and the price quoted on the screen. At times, after the bursting of a bubble, the value investor is vindicated as prices revert to the mean and as is often the case, overshoot the mean. At other times, the value investor is in self doubt wondering if there is something to the weak form of the efficient market hypothesis after all.

Somewhere along the journey they learn that Charlie Munger influenced Warren Buffett’s way of thinking about investments and there is value in paying up for quality instead of waiting for years for the market environment to turn in their favor. They might transform into growth at a reasonable price (GARP) investors, feeling a little uneasy about leaving their value investing tribe behind as many of the other investors they communicated with or exchanged ideas with remain entrenched firmly in the value investing world. Their former tribe has now moved on to foreign locales (Japan was a favorite for a while) to find ever cheaper companies that happen to be cheap for a good reason.

After some measure of success with GARP, realization quickly dawns that the Costcos (COST) and Microsofts (MSFT) of the world are few and far in-between and are often not available at a “reasonable” price. Microsoft, which was range bound and languished for more than a decade in the 2000s much like Intel (INTC) and Gilead (GILD) are doing right now, found its groove again and Charlie Munger now thinks Costco is still a great investment if you have an extremely long 50 year investment horizon.

Looking for opportunities, investors start looking into either esoteric investments or derivatives. Some find their way into event-driven strategies like merger arbitrage, spin-offs, bankruptcies and SPACs, looking for systemic inefficiencies. Others start thinking about growth companies and conflate growth with quality. They come to the realization that growth investors have a different time horizon and are willing to forego near-term profits for an earnings bonanza at some point in an undetermined future.

The discovery that momentum factors can deliver just as good a performance as value factors can be an eye opener for some investors, which inevitably leads to the question of whether you can combine both factors. Studies have shown that a momentum strategy can deliver great returns as long as you can manage the “turns”.

The last several months we have been going through a turn, a passing of the baton from growth to value, and you can clearly see this in the performance of the S&P 500 Value ETF (VOOV) vs. the S&P 500 Growth ETF (VOOG). It is cold comfort that while the relative performance of VOOV is better than VOOG, it still delivered negative absolute performance.

All of this brings me to the question of whether we can start thinking of investing as a seasonal activity instead of a tribal activity where we remain mentally agile to surf the waves that are presented to us rather than the wait for extended periods of time for the perfect wave that fits our style. Can we don our value investor hats after big market declines (2000-2003, 2007-2009, March 2020 and the last six months) and then take it off after the opportunity has passed, realizing that the likelihood of running into value traps is higher once the market stabilizes? Can we subscribe to a season of GARP and event-driven strategies as we look to the future to see what the next season brings? Leaving behind our tribes and opening ourselves up to a different set of values/ideologies is very difficult to do and maybe therein lies the opportunity to achieve superior outcomes.

A couple of years ago, I tweeted that different market cycles require different strategies and that resonated with Mike Harris, a brilliant investor/trader who been trading for much longer than I have been on my journey. 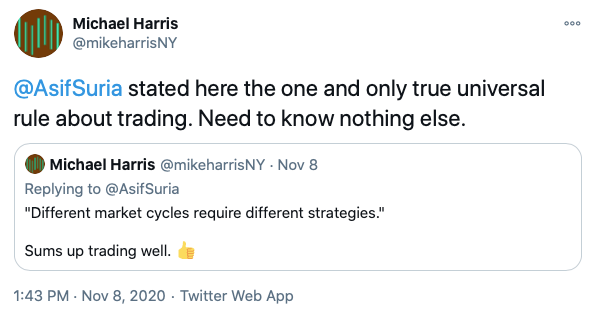 How has your investment process evolved?