Most M&A observers had expected U.S. deal activity to moderate or drop sharply this year but it feels like things are heating up with large acquisitions like Microsoft’s acquisition of Activision Blizzard (ATVI) or Elon Musk’s acquisition of Twitter (TWTR). More than half of the 45 deals announced since the start of the year have been bigger than a billion dollars in size and 13 deals were larger than $10 billion. Aggregate total deals announced this year are now approaching $300 billion. Maybe this is the last hurrah before the tide goes out. Merger activity increased significantly last week with eight new deals announced and two deals completed. Three of the eight new deals announced last week were potential deals in the works.

An interesting deal announced last week was the acquisition of Redbox Entertainment by Chicken Soup for the Soul Entertainment (CSSE). In over a decade of tracking Merger Arbitrage deals, we have never come across a ‘take under’ at such a massive discount. Redbox was trading at $5.60 before the deal was announced. Under the terms of the agreement, Chicken Soup will acquire Redbox in an all stock deal at a fixed exchange ratio of 0.087 of a share of class A common stock of Chicken Soup per Redbox share, representing a discount of 82%. Based on CSSE’s current price of $5.48, the deal price works out to less than 48 cents per share of Redbox. I read the merger agreement twice to make sure I was not missing something. The 0.087 per share exchange ratio does not appear to be a typo.

Redbox Entertainment, a video rental company known for its bright red kiosks is another victim of digital media and distribution. The company went public in October 2021 through a SPAC merger with Seaport Global Acquisition. The company posted a string of losses after going public and Redbox’s post-SPAC shares declined from $10 to below $2 recently, as you can see from the chart below. Operating losses and a growing debt load probably left the company with few options but to accept this take under offer from CSSE. 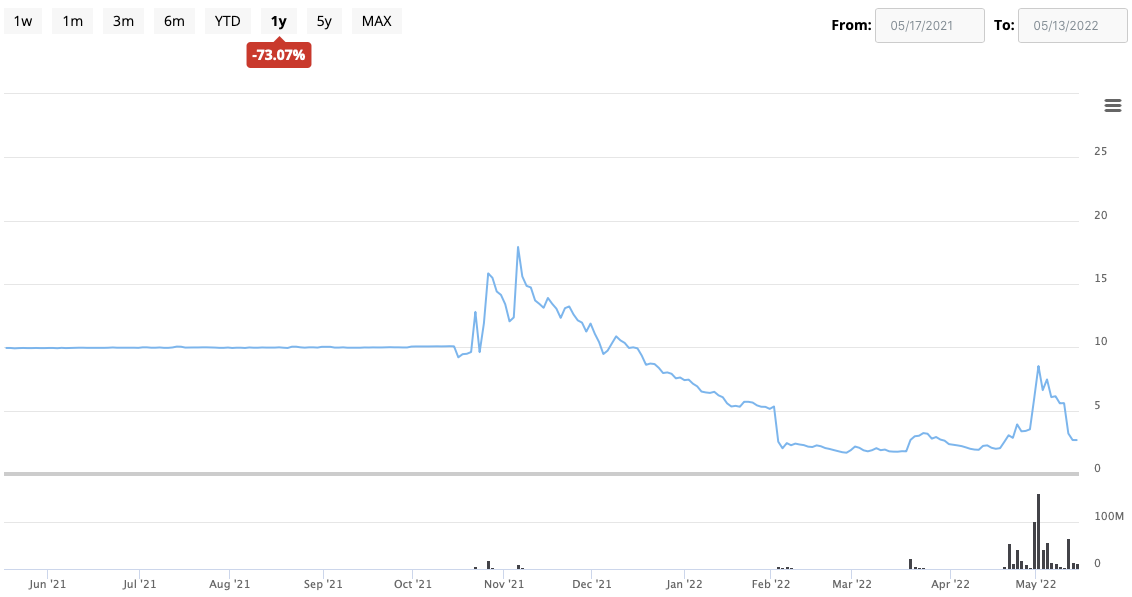 The fiasco at Redbox pales in comparison with what is going on with the acquisition of Twitter. Following Elon Musk’s tweet last week, stating that the Twitter deal is temporarily on hold, Twitter shares fell as low as $40.01 on Friday, May 13 before recovering a little to close at $40.72. At Friday’s closing price, the spread on the deal expanded to 33.10% or 52.52% annualized if the deal closes by the end of the year. We wrote last month that the $54.20 price Musk was offering was fair for the company. I’ve been a Twitter shareholder for several years but the spread on the deal did not convince me to add more to my position. Musk, responding to his tweet about putting the deal on hold, mentioned that he is still committed to the acquisition. 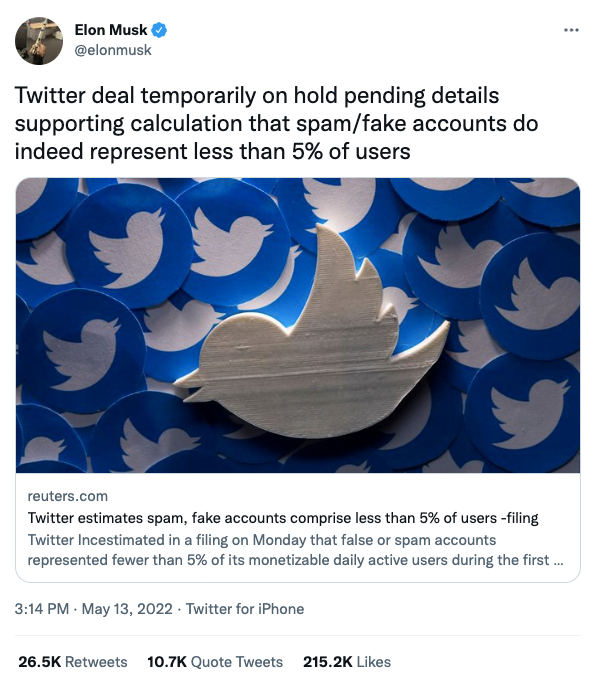 This sudden interest in doing further due diligence about the number of bots on Twitter is surprising considering Elon had on many occasions openly talked about ‘fixing the bots’. Tesla’s stock has been under pressure and is down 23% since the deal was announced. If the stock were to fall further, it could impact the margin loan portion of the financing for Twitter and the banks might require Elon to post more collateral. This latest twist could be a ploy to get Twitter’s Board of Directors back to the negotiating table and accept a lower offer the way Bernard Arnault, LVMH’s billionaire CEO, managed to negotiate the Tiffany’s deal down from $135 per share to $131.50 per share (a $400 million discount). LVMH had attempted to walk away from that deal citing the pandemic’s impact on Tiffany’s sales but Tiffany sued LVMH to compel them to complete the merger. I certainly hope that Twitter’s Board of Directors does not cave into pressure to negotiate the deal lower. Walking away from this deal is going to be very difficult for Elon and Twitter could sue him to make him perform. 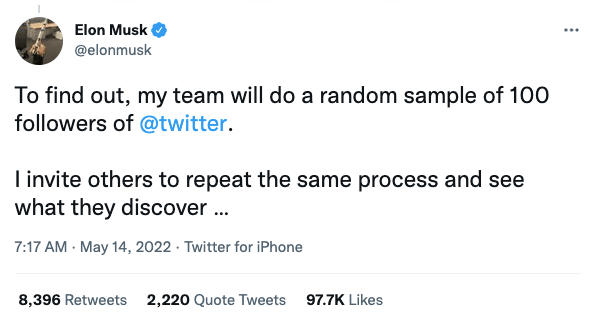 If you found this article informative and would like to receive it by email every Monday morning before the market opens, click here to subscribe for free.

The table below shows weekly spread changes between May 7 and May 13, 2022.

Disclaimer: I have long positions in Twitter (TWTR), First Horizon (FHN), Tower Semiconductor (TSEM), Healthcare Trust of America (HTA), TEGNA (TGNA) and Bluerock Residential Growth REIT (BRG). Please do your own due diligence before buying or selling any securities mentioned in this article. We do not warrant the completeness or accuracy of the content or data provided in this article.

May 2022 Mid-Month Update: Merger Arbitrage + Spin-Off Combo Deal
A Season For Every Strategy