A key takeaway for me from the book Dead Companies Walking that I reviewed last month was hedge fund manager Scott Fearon’s approach to short selling. I wrote about it in my review as follows,

The part of the book I found really fascinating was how he approaches short selling. He prefers to short stocks after they have already declined 50% from their highs. This approach helped him avoid shorting stocks during the height of the dot com bubble. I guess he really paid heed to the saying, “the market can remain irrational longer than you can stay solvent”.

Story stocks often attract short sellers on their meteoric rise to heights that make no sense. Unfortunately what is expensive, can get significantly more expensive. By adopting Mr. Fearon’s approach, you are participating in mean reversion after the story has fizzed and the chart is pointing in the right direction. This approach could have worked well with a stock like pandemic bubble favorite Carvana (CVNA) that is down more than 95% over the last year. Shorting after the stock had dropped to $150 from its peak of over $300 would have still worked out well. Insiders of the company that were selling hand hand over fist when the stock was approaching $300, turned around and started buying after it had dropped to the low $20s.

Another takeaway that I did not get to chance to discuss in my review was related to rules. In both business and investing, we usually end up creating a set of rules or a playbook based on our prior experiences. I discussed some of this in my Pattern Matching article earlier this year. While there is comfort in having a playbook, there are times when getting deeply entrenched with a playbook can be detrimental to the business or investor. A playbook that was built for football may not translate very well for playing basketball. Yes, there are some common elements, but each game is sufficiently different that the playbook would need to be altered or potentially completely abandoned.

Mr. Fearon discusses his errors of omission where he stuck to his investing rules and ended up missing out on excellent returns on investments like Starbucks (SBUX) and Costco (COST) despite visiting the companies, meeting with the management teams and using these products. Similarly, he recounts companies that stayed true to their playbooks long after they had lost relevance. A playbook that was developed by investors during the last decade of quantitative easing and a low interest rate environment, may lead them astray in a macro environment dominated by quantitative tightening and an inverted yield curve.

I was reminded of this as I was writing about insider buying at cloud software company Datadog (DDOG) and Redfin (RDFN) for an article on Seeking Alpha last week. Following insider purchases at Zillow (Z) by its long serving Director Jay Hoag and Founder Rich Barton in November 2018 as discussed in this Insider Weekends article, I opened a position in the company when it was trading in the low $30s. The stock went to more than double by early 2020 and right before the pandemic related bear-market in March 2020, I sold half my position at around $66 per share. The decision did not have anything to do with Zillow’s prospects. I was worried about the impact of the pandemic and wanted to scale back my overall portfolio exposure to stocks.

The extent of monetary and fiscal stimulus we experienced in 2020 was unprecedented and laid the ground for multiple bubbles and the inflation that followed. Zillow’s stock, fueled by both a tech bubble and rapidly rising revenue thanks to their doomed home flipping business, went parabolic and shot up to a peak of over $200 per share. 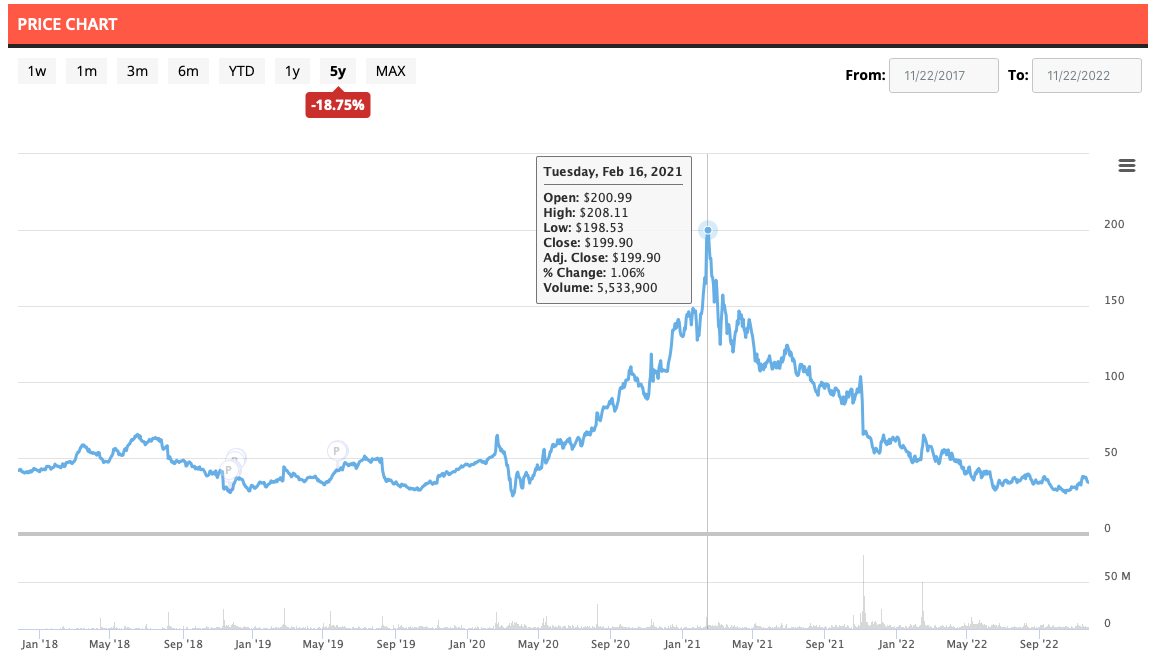 The stock was up more than 500% from my purchase price at its peak in 2021. If I was willing to sell the stock at around $66 pre-pandemic, shouldn’t I have liquidated the position as it approached $200? As I mentioned earlier, the sale in February 2020 had to do with bringing down overall exposure to stocks and not something specific to Zillow. The decision not to sell even at $200 was informed by my past experiences. In an April 2020 article discussing the process of selling and the fallacy of using a simple rule of thumb to determine when to sell a stock, I wrote the following,

Let me illustrate the fallacy of this kind of rule of thumb from an experience in my early years of investing. It was after the dot com bubble had burst in 2000 and the ensuing deep bear market saw stocks like Amazon trade below $10 and Apple below $2 (on a split adjusted basis). There was another company I liked back then and whose product I used a lot at that time. That company was Priceline.com, which traded with the stock symbol PCLN. After several acquisitions, the company is now called Booking Holdings with the new stock symbol BKNG. I picked up some shares of Priceline.com for $1.50 ($9 on a split adjusted basis taking into account the 1 for 6 reverse split in June 2003).

A few months after I purchased the position, the stock doubled. Despite being a new investor, I had the fortitude (or dumb luck) to hold on to the stock and then it went up another 100%. The position I purchased for $1.50 was now $4.50 in the span of a few short months. As a student of value investing, this did not make sense to me. How can a company that was valued at a certain price now be worth three times as much just a few months later? I decided to take the profit and sold the position for a 200% gain. Beyond errors of omission (Google, Chipotle, Costco, etc.) this was one of my most expensive mistakes. The stock went on a multi-year run and was trading at over $2,000 by early 2020. On a split adjusted basis, it went up more than 22,000% from my purchase price. Yes, 22,000%. I double checked my calculations and verified that the stock did not split again.

This experience of missing out on massive gains on Booking caused me to hold on to Zillow and other growth stocks in 2020 and 2021 long after I should have sold them. While I scaled back exposure to some of them including, Zoom (ZM), Twilio (TWLO) and Atlassian (TEAM), I did not exit them completely. I stuck by my rules despite recognizing we were in a massive bubble.

In recent months, I have started building back some of the positions I had scaled back during 2020 and 2021. I added to my Zillow position once again at around $31. As I watch the disaster unfold at Redfin, I am inclined to continue adding to my position in Zillow. The company will likely suffer in the near-term as the real estate bubble continues to deflate but should come out on the other end much stronger and in a favorable competitive environment.

Investing is hard. The longer you have been investing, the more you realize just how difficult the process can be. You have to know when to follow the rules you have established and when to be flexible enough to break them.