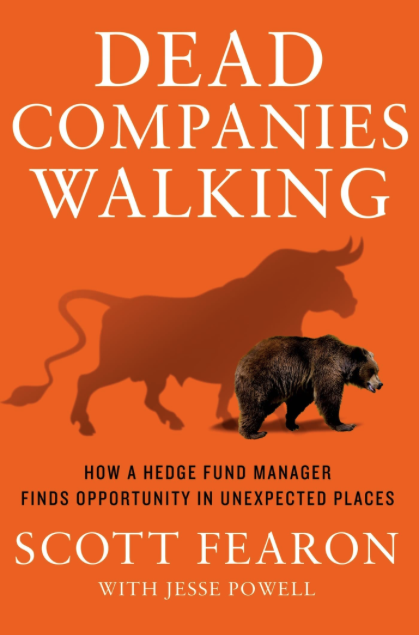 A friend recently recommended that I check out a book called Dead Companies Walking by Scott Fearon and Jesse Powell. He recommended the book as much for its conversational writing style as he did regarding the content and the book did not disappoint on either front. Dead Companies Walking is a short easy read that I really enjoyed over the last few days. Mr. Fearon is a long/short hedge fund manager who in 1991, started his fund Crown Advisors Management in the San Francisco Bay Area. He loves visiting companies and as of March 2020 had visited 2,200 companies over 28 years including 120 in 2019. You can think of the book as a collection of stories from his visits to various companies both before and after the SEC passed regulation FD in October 2000.

Mr. Fearon currently manages $240 million in assets and his latest 13-F filing reveals a fairly diversified portfolio with 44 long positions, with the top 10 positions accounting for 42% of his portfolio. Unfortunately, since 13-F filings do not reveal short positions, his latest filing only gives us a partial glimpse into his overall portfolio. Despite the fact that the book focuses on short selling, Mr. Fearon admits that he has made more money by being long stocks. He alludes to this in the introduction to the book when he states,

“Over twenty-three years, my fund rose roughly 1,100 percent after all fees – significantly higher than the S&P 500’s total return during that same period. I credit one thing above all for this success. Long ago, I learned to appreciate one of the most enduring and important American business traditions: failure.

While most of my fund’s investments are in the stock of companies I believe are undervalued, I also look for stocks that are overvalued by the markets. My specialty is identifying what I call “deal companies walking” – businesses on their way to bankruptcy and a zeroed-out share price. To the non investor, earning money on losing stocks might sound counterintuitive. But short selling is a routing, if widely misunderstood, investment strategy. And while it may seem macabre to profit on the misfortunes of others, investors like me make our markets stronger and more efficient.”

If  you have been investing for any length of time, some of the insights he shares including the negative impact large M&A transactions can have on companies and the importance of paying attention to a company’s management, are well known. This is one of the reasons we track C-Suite Transitions on InsideArbitrage.

The part of the book I found really fascinating was how he approaches short selling. He prefers to short stocks after they have already declined 50% from their highs. This approach helped him avoid shorting stocks during the height of the dot com bubble. I guess he really paid heed to the saying, “the market can remain irrational longer than you can stay solvent”.

Story stocks often attract short sellers on their meteoric rise to heights that make no sense. Unfortunately what is expensive, can get significantly more expensive. By adopting Mr. Fearon’s approach, you are participating in mean reversion after the story has fizzed and the chart is pointing in the right direction. This approach could have worked well with a stock like pandemic bubble favorite Carvana (CVNA) that is down more than 95% over the last year. Shorting after the stock had dropped to $150 from its peak of over $300 would have still worked out well. Insiders of the company that were selling hand hand over fist when the stock was approaching $300, turned around and started buying after it had dropped to the low $20s.

The book is infused with humor and his description of his visit to Blockbuster as outlined below was amusing.

For a brief moment in December 2007, I thought the video rental chain Blockbuster had hired a movie star to be its director of investor relations. The woman who came out to greet me in the lobby of the company’s Dallas headquarters could have easily walked right off the cover of a DVD in one of its stores. She was tall and slender, with silky dark hair and a matinee idol’s radiant smile. Her name was Angelika, and her slight European accent made her sound like a femme fatale in a James Bond flick.

“Good morning, Mr. Fearon,” she said, extending her hand. “Why don’t we speak in my office?”.

After I managed to quit stammering, I accepted her offer. You have to understand, I spend almost all my time meeting with people who look more or less like me – middle-aged guys with boring haircuts in sport coats or oxford shirts.

His little anecdote about visiting the COO of Herbalife (HLF) made me chuckle. The book clearly benefits from Mr. Fearon’s collaboration with fellow writer Jesse Powell. Beyond being easy to read,  I could really relate to the book because I live in the San Francisco Bay Area and many of the locations they discuss in the book are intimately familiar to me.

The book ends with Mr. Fearon expressing his frustration with the U.S. government bailing out “too big to fail” banks during the Great Recession of 2008-2009 and not allowing free markets to correct themselves through a string of bankruptcies. I held a different view back then. The government did allow Lehman Brothers to fail and both Bear Stearns and WaMu were sold to J.P. Morgan Chase at fire sale prices.

When you watched Ben Bernanke testify in front of congress in 2009, the tremor in his voice was unmistakable. The kind of pressure the trio of Fed Chairman Ben Bernanke, Treasury Secretary Hank Paulson and NY Fed President Timothy Geithner experienced during the last months of 2008 and early 2009 is hard for people to imagine. I felt that they did a fabulous job helping us through the Great Recession and making sure it did not turn into the second coming of the Great Depression.

The much maligned $700 billion TARP program, which was viewed as a bailout fund and was heavy opposed by both politicians and the public, actually went on to make money for the U.S. government once asset values recovered for unusual lows.

Graham Duncan’s article The Playing Field comes to mind as I think about that period. He wrote the following as he described Warren Buffett as a “Level 5 investor”,

There are very few Level 5 investors, but Warren Buffet is certainly among them. Buffett has steadily increased his public presence over the last several decades and he was even more present in the media than usual during the 2008 financial crisis. He regularly went on CNBC and Charlie Rose to try to calm market participants and encourage Congress to act on fiscal stimulus. He used metaphors designed to appeal to a broad swath of the public, in the hope of building support for congressional action: “Look, the patient is undergoing cardiac arrest right now and the first thing we have to do is to stabilize the patient.”

Despite my little disagreement with how the book ends, I found the book both informative and entertaining, and would highly recommend you check it out. For further reading, check out Mr. Fearon’s March 2020 interview at the Kellogg School of Management, titled How to Pick a Loser.