This is the second article in a new series of posts that we are going to publish mid-month for InsideArbitrage Premium and InsideArbitrage Plus subscribers. These posts will contain updates related to the model portfolio (if any) or a new quick idea. This month we want to highlight some concerns we have about how stretched the market appears on several metrics and steps investors could take if the winds of change are upon us.

In early 2020, I was following the spread of the pandemic through Twitter (TWTR) and through conversations with investors on the other side of the globe who were already seeing mandatory shutdowns and the first-hand impact of the pandemic. It was fascinating to recently hear the former assistant director of the California Department of Public Health, Dr. Charity Dean, reflect on this on Barry Ritholz’s Masters in Business podcast, where she said the following about the COVID-19 pandemic,

“So operationally as a country, I really think it’s important that we rethink who’s doing the frontline operations, do they have enough resources, and do we have a way to quickly get centralized intelligence out to all those people. Right now, the way they share information is fax machines, and emails, and phone calls. And that cannot move as fast as the pathogen.

The pathogens are moving faster, and so we have to develop systems that can move even faster than the pathogens. You know, what I was inspired by, was watching Twitter and how fast, rumors can spread on Twitter. In January 2020, that’s where I was going to look for intelligence from Wuhan.”

While COVID-19 had already found its way to U.S. shores, the market seemed to take a much more sanguine view of the situation and the S&P 500 notched an all-time high on February 19, 2020 before dropping more than 30% in the next few weeks. Ten days before the bottom fell out of the market, on February 9, 2020 we wrote the following in an insider weekends post highlighting an elevated level of insider selling where insiders sold $5.4 billion worth of stock in a single week,

With the novel coronavirus risk continuing to unfold, I am surprised insider were not selling even more. Beyond the direct impact to the second largest economy in the world, we are now starting to see second order effects due to the impact on the global supply-chain. It was not surprising to hear that a large number of car manufacturers had extended factory closures in China but the second order effects became evident when Hyundai suspended car production in South Korea due to a shortage of parts.

For those that were invested during the SARS pandemic and the Ebola epidemic, it may seem like we will get through this one relative unscathed just like we did the last ones but it is probably a good idea to take risk down a notch or buy some protection in case the infection continues to spread across the globe.

Protection from put options and having some dry powder on hand made a significant difference when I started investing on the long side again in April 2020. Insiders once again pointed the way with unprecedented amount of insider buying near the March 2020 lows. We wrote the following in a post titled Insider Buying Surpasses Selling For The First Time,

We have been tracking insider data for nearly 10 years and in all this time we have not come across a single week where insider buying outpaced insider selling. The rapid drop in the markets over the last few weeks that saw the volatility index (VIX) jump to 75 last Thursday (the peak during the 2008-2009 Great Recession was 79) also caused insiders to start buying their own stocks at an accelerated pace.

We have been bearish for several weeks now and have written about showing restraint despite the insiders stepping up their insider buying because insiders as a group generally tend to be optimistic about their own companies, sometime buy to “signal” the market and like value investors often tend to be early.

A week later, we wrote the following in a post titled Insider Buying Once Again Surpasses Insider Selling,

The market continued its decline last week but the volatility index or the “fear index” (VIX) also declined, indicating there was some exhaustion of the fear we were experiencing in the market. With the U.S. surpassing all other countries, besides China and Italy, in the number of confirmed COVID-19 cases, the news is likely to get worse over the next few days. On account of inadequate testing and lack of preparation, the number of cases in the U.S. is potentially significantly understated.

I have been unwinding the hedges I put in place more than a month ago, shorted the volatility index last week and plan to start nibbling on the long side from the COVID-19 watch list I wrote about earlier this month.

Insiders are once again signaling to us that valuations are stretched with insiders selling $6.65 billion worth of stock two weeks ago and an additional $10 billion worth of stock last week. These sales were elevated even if remove a $3.3 billion sale of Amazon (AMZN) by Jeff Bezos and a $6.9 billion sale of Tesla (TSLA) by Elon Musk. This signal from insiders coincides with the Fed tapering its bond purchase program, rising inflation that does not appear to be transitory, investment activity in private companies that can be best described as euphoric and a big jump in the number of SPAC IPOs.

The co-founder of VC firm Lux Capital and brilliant investor Josh Wolfe, writes in his Q3 2021 quarterly letter to investors,

In just the last 12 weeks, during Q3, startups raised more cash than startups did during the entire 1999-2000 dotcom boom and bust. The total was nearly $160 billion, double last year’s Q3 and more than any full-year amount ever before 2018.

Nearly 10 years ago, there were under 40 unicorns, private companies valued at or over $1 billion. Today, two unicorns are minted a week and once rare, they now number over 800. 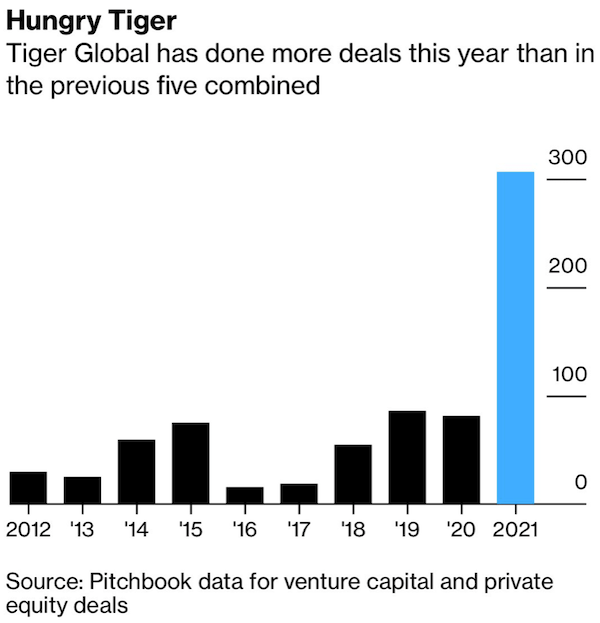 I decided to mine the InsideArbitrage database of SPAC IPOs to see if we were similarly seeing an increase in SPAC activity and the table below outlines how both the number of SPAC IPOs and the value of those IPOs has nearly doubled in 2021 compared to the full year 2020, which in itself was a record year for SPAC IPOs.

I am not a perma-bear and neither is this a call to sell everything and head for the hills. In fact we have been actively investing in the InsideArbitrage Model Portfolio after writing about a new idea every month and the portfolio has generated gains of over 30% despite several merger arbitrage positions and a sizable cash position while we built the portfolio over the last 16 months. However with multiple bubbles brewing simultaneously in public markets, private markets, real estate and crypto currencies, this is a time for caution.

While attempting to time the market may be futile, it may be prudent to adjust the risk profile of the portfolio while the exits are still open and either scale back positions or add protection through put options. I have started scaling back positions in my personal portfolio and will be buying put options on an ETF that is the poster child of this bubble. I am also going to sell half our position in the flooring products company Mohawk Industries (MHK) from the model portfolio and register a gain of 102.14% on the position since we wrote about it for the May 2020 newsletter. While I still like the company, with input costs rising, supply chain issues and the housing frenzy cooling off thanks to higher interest rates, the prospects for the company have dimmed a little.

I am also going to use this opportunity to exit the full position in Norton LifeLock (NLOK) that we wrote about in the June 2021 newsletter and book a loss of 7.71%. The company announced a massive $8 billion+ acquisition of Avast shortly after we wrote about the company and this changes the nature of the investment. Under different market conditions, I would have been willing to be patient to see how the integration between the two companies might work out but this is a time for action and I would rather exit the position. I will also exit half the position in Mohawk and the full position in Norton LifeLock from my personal portfolio after this post is published.

Insider Weekends: The Pied Piper Is Heading Out Of Town
Merger Arbitrage Mondays – McAfee Acquired By An Investor Group For $14 Billion