Welcome to edition 508 of Insider Weekends. We have been tracking insider data for nearly 10 years and in all this time we have not come across a single week where insider buying outpaced insider selling. The rapid drop in the markets over the last few weeks that saw the volatility index (VIX) jump to 75 last Thursday (the peak during the 2008-2009 Great Recession was 79) also caused insiders to start buying their own stocks at an accelerated pace.

We have been bearish for several weeks now and have written about showing restraint despite the insiders stepping up their insider buying because insiders as a group generally tend to be optimistic about their own companies, sometime buy to “signal” the market and like value investors often tend to be early. We wrote the following last week,

The Coronavirus has reached our shores and appears to be spreading across multiple states leading to several large companies including Apple (APPL), Twitter (TWTR) and Palantir asking their corporate employees or employees at West Coast offices to work from home. We are also seeing universities like Stanford and University of Washington shift classes online and there have been at least a couple of K-12 school closures in Northern California.

The markets shrugged off a 50 basis point drop in interest rates and the S&P 500 almost ended flat for the week, although with several large swings in both directions all week long.

My opinion has not changed and the next few weeks are likely to remain challenging. Futures are pointing to a very red open on Monday.

And the following on February 9th in an article titled Jeff Bezos Sells Over $4 Billion Of Amazon.com Stock,

With the novel coronavirus risk continuing to unfold, I am surprised insider were not selling even more. Beyond the direct impact to the second largest economy in the world, we are now starting to see second order effects due to the impact on the global supply-chain. It was not surprising to hear that a large number of car manufacturers had extended factory closures in China but the second order effects became evident when Hyundai suspended car production in South Korea due to a shortage of parts.

For those that were invested during the SARS pandemic and the Ebola epidemic, it may seem like we will get through this one relative unscathed just like we did the last ones but it is probably a good idea to take risk down a notch or buy some protection in case the infection continues to spread across the globe.

The large and rapid drop in the markets has created some interesting opportunities and while I remain bearish for now, I am looking at several ideas on the long side that I hope to get into in the coming weeks. The fallacy of the human condition is that we expect things to continue as they are and a rapidly evolving future or Black Swan events are usually given low credence. For an interesting compendium of fallacies, check out Stanford’s Encyclopedia of Philosophy and the book Predictably Irrational, which I found to be an easier read than Daniel Kahneman’s excellent Thinking Fast and Slow.

The reason I bring up these fallacies is that at some point you have to look past what is going on right now (the news is likely to get more troubling) and realize that this is most likely a one or two quarter event based on what we saw with SARS and MERS. There is always the possibility that the virus could mutate and come back again later this year or next year but I assign a low probability to that scenario.

Sell/Buy Ratio: The insider Sell/Buy ratio is calculated by dividing the total insider sales in a given week by total insider purchases that week. The adjusted ratio for last week dropped to 0.98. In other words, insiders sold almost the same amount of stock as they purchased. The Sell/Buy ratio this week compares favorably with the prior week, when the ratio stood at 5.44. 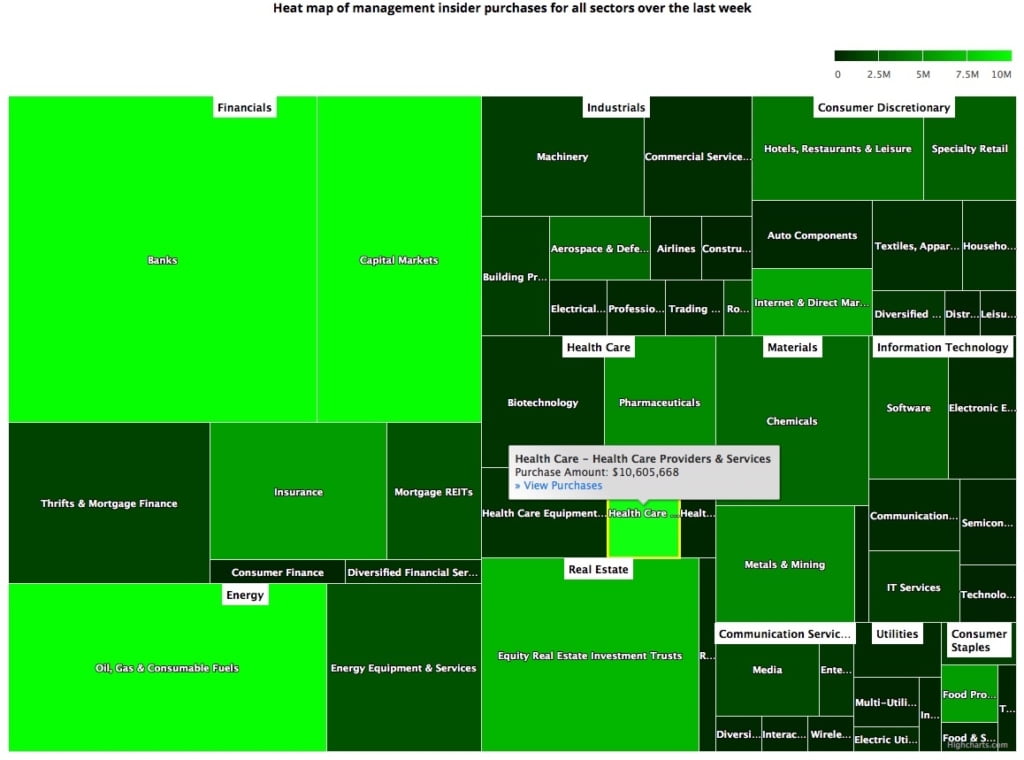 Looking through the list of the top 5 insider purchases this week felt like déjà vu because many of these stocks were on our list last week or we have seen insider buying in them in the past. Premium members also receive a curated list of all management only insider purchases and not just the top 5 purchases.

Shares of this residential REIT were acquired by 3 insiders:

A third insider has joined the Hughes father-daughter team in buying AMH stock even though the stock has barely suffered during this crisis compared to most other stocks. A small excerpt about AMH from a September 2018 premium post is given below,

American Homes 4 Rent (AMH) with its portfolio of 52,049 single-family homes across 22 states was conceived during the depths of the last housing recession by billionaire B. Wayne Hughes. His impeccable timing in scooping up homes very close to the bottom could have been luck but was probably more on account of his decades long-experience with real estate as the founder and CEO of the largest self-storage company Public Storage (PSA). He retired as CEO of PSA in 2002 and stepped down as Chairman in 2011, just in time to start American Homes 4 Rent. The Seattle Times wrote an article about the company in 2013 and we started noticing his insider purchases of AMH in late 2014.

You can view the list of recent insider transactions for American Homes 4 Rent here.

Director Filip Balcaen acquired 202,000 shares of this home flooring products company, paying $102.17 per share for a total amount of $20.64 million. These shares were purchased indirectly by Floorenter NV.

Mohawk is the world’s largest flooring manufacturer with sales in over 170 countries. Mohawk showed up on my radar in 2018 when I saw multiple purchases by Mr. Balcaen following a big drop in the stock price. High lumber prices and high oil prices combined with a strong dollar hurt results in 2018. While their input costs have gone down over the last few weeks and months, the strong dollar and the COVID-19 situation remain headwinds. Trading at just 6 times EBITDA, the stock remains high on my watch list.

You can view the list of recent insider transactions for Mohawk Industries, Inc. here.

Shares of this oil & gas midstream company were acquired by 5 insiders:

Shares of this post-acute healthcare services provider were acquired by 2 insiders:

You can view the list of recent insider transactions for Encompass Health Corporation here.

You can view the list of recent insider transactions for Kinder Morgan, Inc. here.

Chief Strategy Officer Mario Spanicciati sold 564,798 shares of this application software company for $61.83, generating $34.92 million from the sale. These shares were sold indirectly through a trust.

You can view the list of recent insider transactions for BlackLine, Inc. here.

Shares of this financial data & stock exchanges company were sold by 2 insiders:

You can view the list of recent insider transactions for Intercontinental Exchange, Inc. here.

You can view the list of recent insider transactions for Uber Technologies, Inc. here.

Shares of this software application company were sold by 6 insiders:

You can view the list of recent insider transactions for Slack Technologies, Inc. here.

Shares of this software application company were sold by 3 insiders:

You can view the list of recent insider transactions for RealPage, Inc. here.

Disclaimer: I hold a long position in AMH. Please do your own due diligence before buying or selling any securities mentioned in this article. We do not warrant the completeness or accuracy of the content or data provided in this article.

Insider Weekends: The Shoen Brothers Purchase $45 Million Worth Of AMERCO