For the third time this year, a deal that was dead or left for dead came back to life. Last month we reported on Front Yard Residential striking a new merger agreement with Ares Management for $13/share in cash that was sweeter than the doomed $12.50/share deal it had struck with Amherst Residential. We also reported earlier this month that Tiffany (TIF) and LVMH modified certain terms of their initial agreement by reducing the purchase price from $135.00 to $131.50 in cash. And now the mall REITs Simon Property Group (SPG) and Taubman Centers (TCO) have decided to settle their differences with a modified deal that is priced at $43/share in cash.

Considering the original deal was priced at $52.50, Taubman shareholders and arbitraguers have taken the deepest cut to deal terms compared to how Tiffany or Front Yard Residential shareholders fared. However, when you look at the entire retail REIT space, Taubman has held up better than most of its peers. Taubman started the year at $29.86 and shareholders who bought before the original deal was announced are still up 27% before this adjustment. With this adjustment, they are ahead 44% this year. This compares with Simon Property Group shares seeing half their value wiped out and The Macerich Company (MAC) shares losing two-thirds of their value. 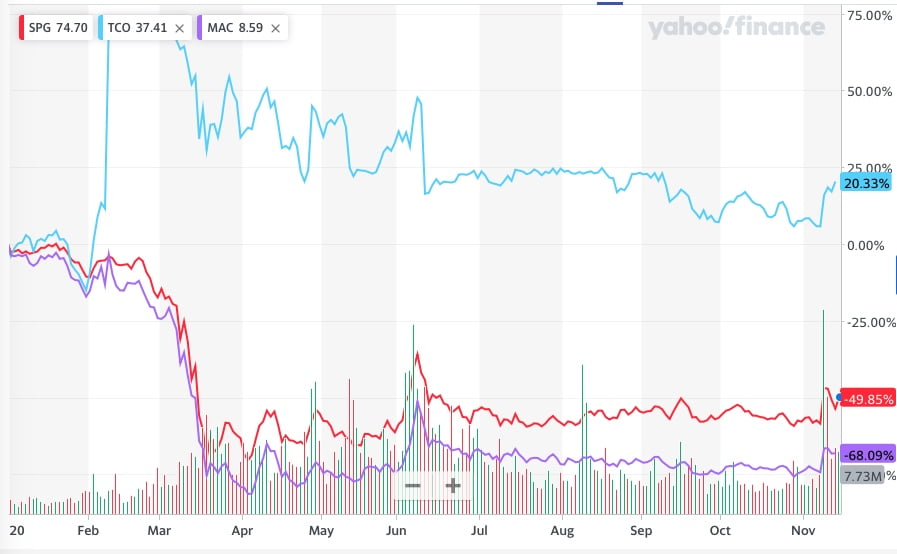 On October 20, 2020, HighPoint Resources Corporation had announced a 1-for-50 reverse stock split of its common stock in order to satisfy the $1.00 minimum bid price requirement for continued listing on the NYSE. A couple of weeks later, the company received notice from the New York Stock Exchange (NYSE) that it was no longer in compliance with the NYSE continued listing standards. On November 9, 2020, Bonanza Creek Energy (BCEI) and HighPoint Resources Corporation (HPR) entered into an agreement to acquire a restructured HighPoint Resources, which provides for HighPoint shareholders to receive 0.114 shares of Bonanza Creek common stock even though current HighPoint common shareholders will only own 1.6% of the combined company.

There were no new deals announced in the Deals in the Works section last week.

Disclaimer: I have a long position in Otelco (OTEL). Please do your own due diligence before buying or selling any securities mentioned in this article. We do not warrant the completeness or accuracy of the content or data provided in this article.