Merger activity increased last week with six new deals announced and one active deal completed. You can find all the active deals listed below in our Merger Arbitrage Tool (MAT) that automatically updates itself during market hours.

One of the new deals announced was the acquisition of Front Yard Residential Corporation (RESI) by Pretium and Ares Management in an all cash deal worth $2.4 billion. As arbitrageurs might remember, this is the second go around for RESI after their $2.3 billion acquisition by Amherst Residential at a price of $12.50 per share failed in May of this year.

When the first deal for RESI failed, we wrote the following:

Front Yard Residential Corporation (RESI) and Amherst Residential mutually terminated their merger agreement. Amherst agreed to not only pay RESI a $25 million termination fee but also agreed to purchase $55 million worth of RESI stock at $12.50 per share. They also extended RESI a two-year unsecured $20 million loan facility. Deals that fall apart can provide opportunities especially on account of forced selling by funds. I looked into RESI after the deal broke and the subsequent drop to the $8 level but came away unimpressed. With a position in American Homes 4 Rent (AMH), I did not want further exposure in this segment, especially when it came to a sub-par operator like RESI.

Quite clearly I was very wrong. Ares Management found significant value where I did not and agreed to acquire RESI for $13.50 per share in cash. The macro environment has changed since I wrote this and there has been an exodus from cities and apartments to single family homes that has benefited both RESI and American Homes 4 Rent (AMH). Nevertheless, I am glad the situation worked out well in the end for shareholders.

A similar situation that has worked out in spades was the failed acquisition of Pacific Biosciences (PACB) by Illumina. The deal was announced on November 1, 2018 with Illumina agreeing to pay $8 per share in cash for the genome sequencing company. By the time I wrote about the deal in a post titled “A Duo Of Merger Arbitrage Opportunities Offering Double Digit Annualized Returns” in late December 2018, the spread on the deal had increased on antitrust concerns. I provided an update on the deal in mid-2019 and by then the spread had widened to nearly 20% and the stock was trading near $6.73. I wrote the following in that update,

Assuming the PacBio deal does not go through, it is possible but unlikely that the stock drops to the pre-deal price of $4.51. The reason I say unlikely is because PacBio is going to benefit from an increase in revenue from customers that were waiting for the company to release a new product called Sequel II. The five analyst that follow the stock expect revenue to increase nearly 40% next year to $143.63 million. Some analysts like Stephen Simpson estimate the company is worth $6.50 on a stand alone basis as discussed in this article. I have been reading Mr. Simpson’s articles for the better part of a decade and he usually has a pretty good handle on valuing companies. However I would apply a discount to his valuation on account of PacBio’s history of operating losses and missed earnings expectations. Assuming a stand alone price of $6, the downside appears to be 73 cents while the upside from the deal completing is $1.27, providing for an asymmetrical risk/reward situation.

If the deal breaks, there is likely to be forced selling by arbitrageurs that could take the price down below the company’s perceived intrinsic value and could provide another opportunity to start or add to a position.

I am going to start a position in PacBio after this premium post is published but will size the position smaller than I tend to size most of my arbitrage positions.

The deal failed on January 2, 2020 and PacBio went on to drop to as low as $2.20 in March before rebounding sharply the rest of the year. The stock closed at $13.90 on Friday and over the last several weeks, I slowly exited my position. 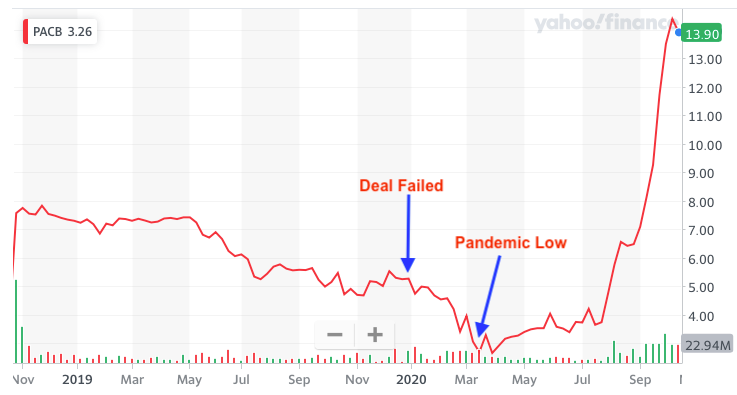 Mergers don’t often fail but when they do, they can provide a good opportunity to investors who are willing to pick up the pieces after the dust settles. Obviously one needs to understand the situation and the potential prospects of the company going forward. I got PacBio right but was mistaken about RESI’s prospects.

Disclaimer: I have a long position in Otelco (OTEL). Please do your own due diligence before buying or selling any securities mentioned in this article. We do not warrant the completeness or accuracy of the content or data provided in this article.