Insider Weekends: CEO Of SuRo Capital Steps Up His Purchases

Welcome to edition 543 of Insider Weekends. Insider buying declined significantly last week with insiders purchasing $49.91 million of stock compared to $102.19 million in the week prior. Selling also declined with insiders selling $3.08 billion of stock last week compared to $3.13 billion in the week prior. This decline in insider buying at a time when insiders are not in an earnings related quiet period is a little surprising and it comes against the backdrop of market weakness last week. With COVID-19 related cases and deaths spiking sharply across the United States and several countries in Europe, investor appetite for risk appears to be moderating.

Sell/Buy Ratio: The insider Sell/Buy ratio is calculated by dividing the total insider sales in a given week by total insider purchases that week. The adjusted ratio for last week went up to 61.7. In other words, insiders sold almost 62 times as much stock as they purchased. The Sell/Buy ratio this week compares unfavorably with the prior week, when the ratio stood at 30.62. 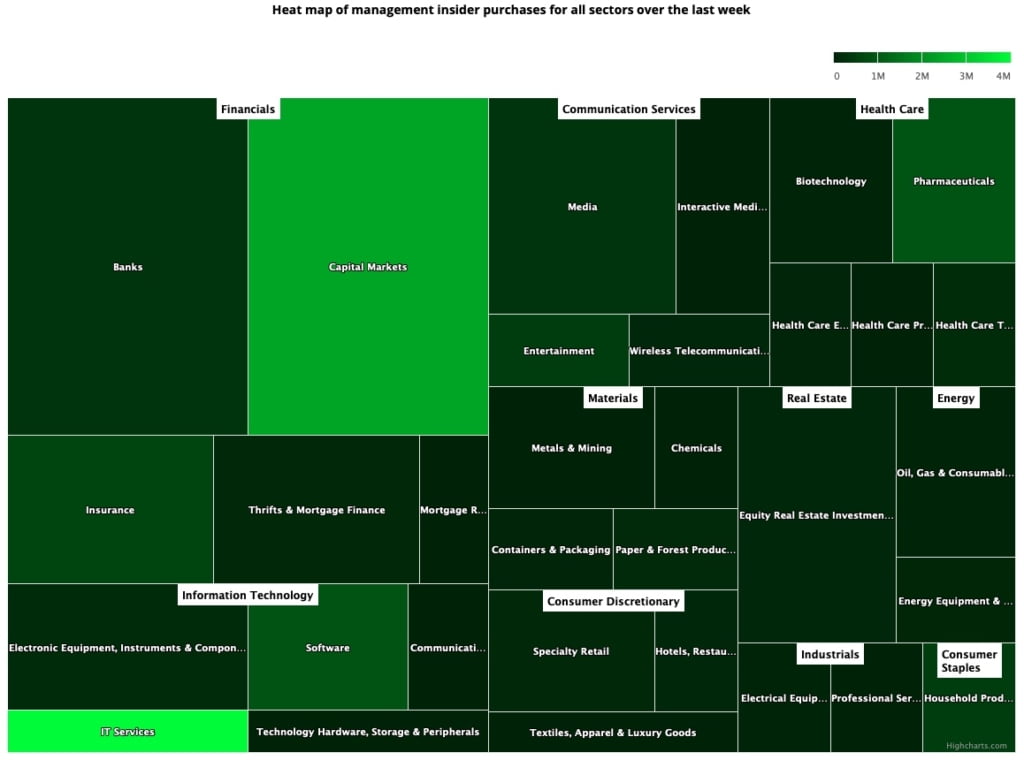 Shares of this healthcare plans company were acquired by 2 insiders:

Mr. Klein also purchased $4.89 million worth of stock in the week prior and I tweeted the following after his purchase: 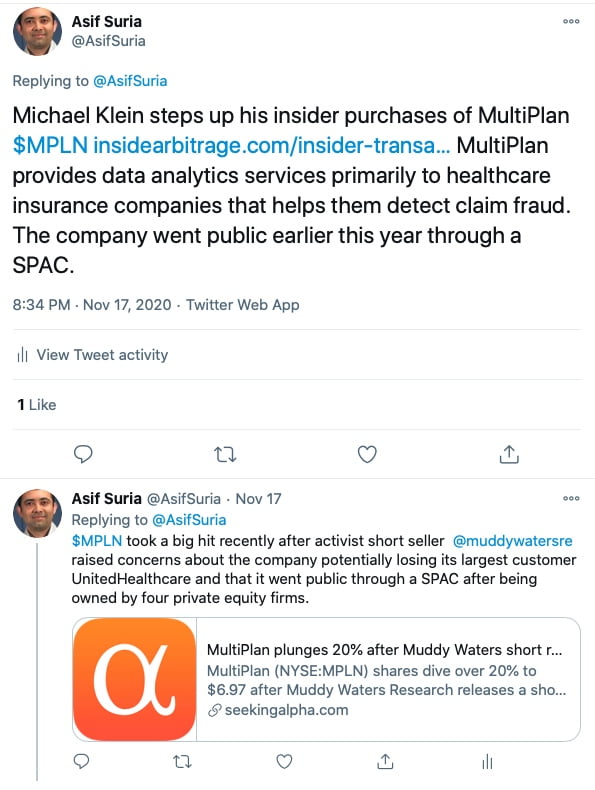 Mr. Klein was previously the Vice Chairman of Citigroup (C) and then started a strategic advisory firm called M. Klein & Company, which was profiled by Reuters in an article titled Wall Street rainmaker Michael Klein no longer a one-man show. He has also launched a series of special purpose acquisition companies or SPACs in recent years, which have merged with various operating businesses including a data analytics company Clarivate (CCC) and MultiPlan (MPLN).

You can view the list of recent insider transactions for MultiPlan Corporation here.

Shares of this software infrastructure company were acquired by 4 insiders:

You can view the list of recent insider transactions for GreenSky, Inc. here.

Director Hutham S. Olayan acquired 25,000 shares of Morgan Stanley, paying $55.40 per share for a total amount of $1.39 million. These shares were purchased indirectly by a trust.

Ms. Olayan, is the Chair of a private multinational enterprise founded in 1947, The Olayan Group. She has been the longest serving director of Morgan Stanley and has been on the board since 2006. This is her largest purchase of Morgan Stanley since we started tracking insider data in 2010. The only other time she purchased shares on the open market was in 2011 when she bought 5,000 shares for $20 per share.

You can view the list of recent insider transactions for Morgan Stanley here.

We wrote briefly about SuRo capital last week following a small purchase by the CEO. The company used to be known as Sutter Rock Capital and was forced to change its name to SuRo Capital because of a lawsuit by Sutter Hill Ventures. SuRo Capital mostly invests in large private technology companies in later rounds and sells their stake after the company goes public. Some might recognize the company as the new incarnation of GSV Capital. Back when it was GSVC it used to trade at a consistent discount to net asset value (NAV) and had stakes in both Facebook and Twitter before those companies went public. I had gotten into GSVC before Twitter went public and the ensuing post-IPO spike in Twitter helped buoy GSVC and the trade worked out well.

SuRo Capital now has some very interesting names in its portfolio including Palantir, which recently went public and has appreciated significantly since going public. Other companies in SuRo’s portfolio include Coursera (I attribute my understanding of AI and Machine Learning to several Coursera courses), Next-door, Course Hero, Blink Health, Lime, etc. Their portfolio is rather concentrated with the top 5 positions accounting for 71% of the portfolio. Coursera and Palantir were top 2 positions when SuRo Capital reported results earlier this month.

Their net asset value (NAV) was $12.46 as of September 30, 2020 and the stock was trading at a discount to NAV at that time. Considering Palantir is up more than 90% since September 30 and SSSS is only up 5%, the current NAV for SSSS is probably even higher assuming they did not sell a large portion of their Palantir stock. I bought a position in SSSS after the first small purchase and it was good to see the CEO purchase even more last week. 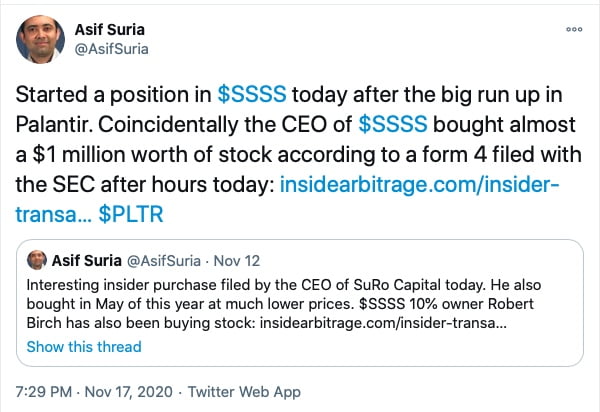 You can view the list of recent insider transactions for SuRo Capital Corp. here.

Executive Chairman Michael J. Valentino acquired 264,900 shares of this late-stage specialty pharmaceutical company, paying $3.79 per share for a total amount of $1 million. Mr. Valentino increased his stake by 134.61% to 461,690 shares with this purchase.

You can view the list of recent insider transactions for PLx Pharma Inc. here.

Shares of Walmart were sold by 3 insiders:

Shares of this agricultural equipment manufacturer were sold by 2 insiders:

You can view the list of recent insider transactions for AGCO Corporation here.

Shares of Charles Schwab were sold by 4 insiders:

You can view the list of recent insider transactions for The Charles Schwab Corporation here.

Shares of this software infrastructure company were sold by 3 insiders:

You can view the list of recent insider transactions for SolarWinds Corporation here.

Shares of this high-performance fiber lasers developer and manufacturer were sold by 2 insiders:

You can view the list of recent insider transactions for IPG Photonics Corporation here.

Disclaimer: I hold long positions in SuRo Capital (SSSS) and Twitter (TWTR). Please do your own due diligence before buying or selling any securities mentioned in this article. We do not warrant the completeness or accuracy of the content or data provided in this article.