Sell/Buy Ratio: The insider Sell/Buy ratio is calculated by dividing the total insider sales in a given week by total insider purchases that week. The adjusted ratio for last week dropped to 12.64. In other words, insiders sold almost 13 times as much stock as they purchased. The Sell/Buy ratio this week compares favorably with the prior week, when the ratio stood at 33.14.

I received a question via Twitter about whether the Sell/Buy ratio was unusually high last week and you can see my response below. 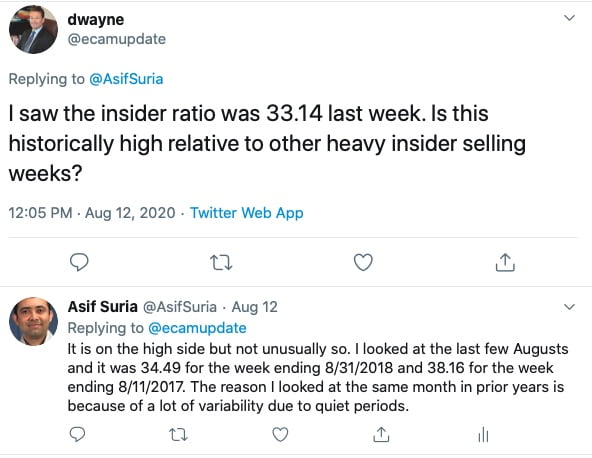 There is quite a bit of variability in the Sell/Buy ratio and the times when it stands out the most is when it hits extremes, like in mid-March when insider buying surpassed insider selling for the first time in over a decade as we discussed here. We wrote the following in that mid-March article,

The large and rapid drop in the markets has created some interesting opportunities and while I remain bearish for now, I am looking at several ideas on the long side that I hope to get into in the coming weeks. The fallacy of the human condition is that we expect things to continue as they are and a rapidly evolving future or Black Swan events are usually given low credence.

Even though the sell/buy ratio came down last week, over $3.5 billion worth of sales in a single week is still significant. Given the huge market rally off the March lows it is not surprising that Carl Icahn sold over $700 million of his Herbalife (HLF) position last week and both David Einhorn and Warren Buffett are buying gold miners.

Director Charles A. Davis acquired 1,254,440 shares of this insurance company, paying $44.27 per share for a total amount of $55.53 million. These shares were purchased indirectly by Trident Capital.

We reported on purchases by Mr. Davis in mid-June when he picked up over $80 million worth of AXIS Capital Holdings stock across several transactions. We wrote the following about his mid-June purchases,

Mr. Davis has been on AXIS Capital’s Board of Directors since the company’s inception in 2001. He is also the CEO of Stone Point Capital, a firm that raised its eighth private equity fund, Trident VIII, with $7 billion in total commitment. Before Stone Point, Mr. Davis was a partner at Goldman Sachs for 23 years.

He purchased 25,000 shares at an average price of $49.90 on Feb 28, 2018 for $1.25 million and then nearly two years later purchased nearly $20 million worth of stock in March 2020. This latest group of purchases are his biggest purchases of AXIS Capital stock as you can see here.

AXIS Capital operates in the insurance and reinsurance sectors and as one would expect was impacted by the COVID-19 situation. The company reported a large loss of $1.94 per share on revenue of $1.68 billion in Q1 2020 but Mr. Davis probably sees opportunity in a sector most others perceive as troubled.

You can view the list of recent insider transactions for AXIS Capital Holdings Limited here.

Shares of this resorts & casinos company were acquired by 2 insiders:

Since these purchases were through various trusts, it looks like the form 4 filings might be reporting the same purchases twice, one for each brother. If this is the case, then the purchases in total were $23.28 million.

This does appear to be a week of repeat purchases as we have reported on several of the companies that insiders bought last week. The Fertittas were active buyers of Red Rock Resorts stock last August and we wrote the following about those purchases,

This is the third week in a row purchases by the Fertitta brothers, Frank and Lorenzo, made our top 5 list. With this latest purchase they have bumped up their stake in the company to over 47.12 million shares representing 67% of total shares outstanding.

Red Rock Resorts (Station Casinos in a former life) went public in April 2016 at a price of $19.50. The Fertittas started buying stock this August after the stock dipped below $19. Despite a recent bounce back from levels the stock had not seen since its IPO, the stock is still down 36% over the last year thanks to a string of earnings misses during the last four quarters.

The stock dropped below $3 during the March lows and it is interesting that the Fertittas waited this long before buying the stock. They closed their casinos on March 17th and they remained closed until June. It is possible that these purchases reflect their optimism about business conditions following the reopening of their casinos.

You can view the list of recent insider transactions for Red Rock Resorts, Inc. here.

Executive Chairman Randal J. Kirk acquired 1,209,384 shares of this biotech company, paying $4.42 per share for a total amount of $5.35 million. These shares were purchased indirectly through various trusts and entities.

You can view the list of recent insider transactions for Precigen, Inc. here.

Director Michael D. Eisner acquired 40,555 shares of this media and internet services provider, paying $122.85 per share for a total amount of $4.98 million. These shares were purchased indirectly through a trust.

You can view the list of recent insider transactions for IAC/InterActiveCorp here.

Chief Executive Officer Douglas A. Cifu acquired 100,000 shares of this market making and liquidity services provider, paying $22.45 per share for a total amount of $2.25 million. Mr. Cifu increased his stake by 51.88% to 292,755 shares with this purchase.

You can view the list of recent insider transactions for Virtu Financial, Inc. here.

Shares of this software application company were sold by 3 insiders:

You can view the list of recent insider transactions for Paylocity Holding Corporation here.

Shares of this medical devices company were sold by 4 insiders:

You can view the list of recent insider transactions for Inspire Medical Systems, Inc. here.

You can view the list of recent insider transactions for Stryker Corporation here.

Shares of this diagnostics & research company were sold by 3 insiders:

You can view the list of recent insider transactions for Medpace Holdings, Inc. here.

Director Roy P. Vagelos sold 33,460 shares of this biotech company for $602.94, generating $20.17 million from the sale. These shares were sold indirectly by the reporting person’s spouse as trustee.

You can view the list of recent insider transactions for Regeneron Pharmaceuticals, Inc. here.