The challenging macro economic environment we find ourselves in is the elephant in the room that has to be addressed before we can dive into our regular programming of discussing stock buyback activity. The higher than expected CPI numbers released on Tuesday and especially the persistently high core CPI numbers shook the markets and triggered a huge decline in most indices. I wrote the following about the CPI print on Twitter on Tuesday.

Institutions paid heed to the strong warning signal that Fed Chair Jay Powell provided last month and purchased protection. I wrote about it in more detail in our last monthly special situations newsletter as well as in the following tweet last week. 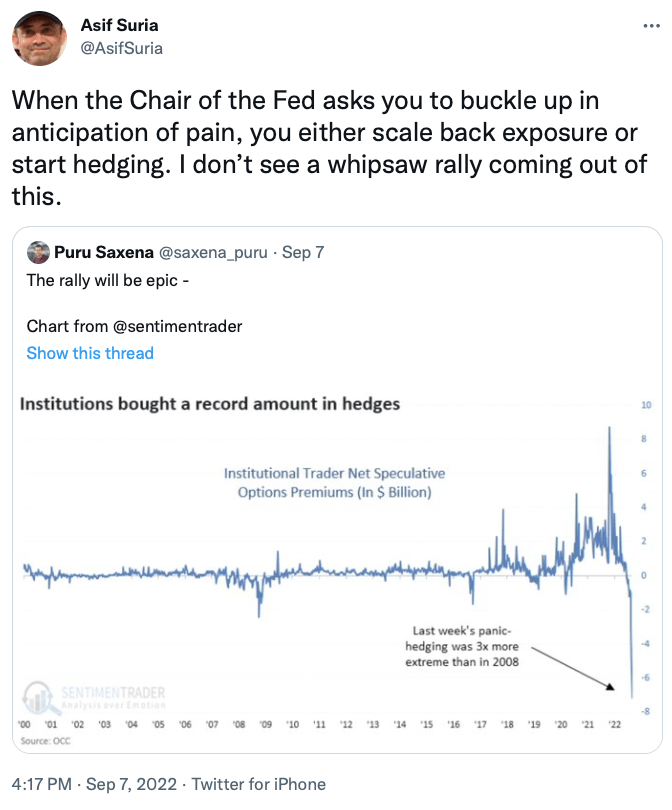 Unless the Fed’s resolve wavers, we are likely to fall into a recession and equities as well as bonds have further downside. It was hard to fathom just a few months ago that 30 year mortgage rates would have eclipsed 6% by September. Once the rates on adjustable rate mortgages start to adjust, the impact will be felt more acutely. Consumers are likely to start pulling back on discretionary purchases first and interest rate sensitive sectors (REITs for example) or companies that are heavily indebted are likely to be the hardest hit. Given the high premiums on put options, I decided not to buy index put options and instead chose to scale back exposure and have a larger than usual allocation to merger arbitrage.

Getting back to our regular programming, buyback activity picked up significantly with 17 companies announcing buybacks last week.

Wireless carrier, T-Mobile US (TMUS) announced a $14 billion share buyback program. This program will run through September 30, 2023, and represents around 8% of its $181.71 billion market cap at announcement. Bucking the general market trend, T-Mobile has seen its stock go up more than 20% year-to-date.

Corteva (CTVA) and Yum! Brands (YUM) announced $2 billion buybacks each representing around 4% and 6% of their market caps at announcement respectively.

The buyback that stood out the most was the small $10 million buyback by The ONE Group Hospitality (STKS). STKS is a global hospitality company that develops, owns and operates, manages and licenses restaurants and lounges. The primary restaurant brands of the company are STK – a multi-unit steakhouse concept and  Kona Grill – a casual bar-centric grill concept. The company is well known for its unique food and beverage services, which the company offers as a contracted service to hotels and airports. The F&B hospitality contracts generate significant revenues for the company and the company gets a share of the operation’s revenue as well as a percentage from the operation’s profitability.

Strong sales momentum in the first quarter of 2022 continued into the second quarter. Total revenue for Q2 2022 grew nearly 15% to $81.1 million compared to Q2 2021. The company’s same store sales continue to be the best in the restaurant industry. Consolidated comparable sales increased 12.8%, with an increase of 19.8% at STK and a 3.7% increase at Kona Grill. The company also delivered over $4 million in net income and $10.4 million in adjusted EBITDA for the quarter. Management license and incentive fee revenues were $4.2 million, increasing 44.1% from $2.9 million in the second quarter of 2021. These strong results are primarily because of the strong demand for the company’s products, capacity restrictions being lifted and an increase in the number of venues.

The stock isn’t expensive with an EV/EBITDA under 10 and a forward EV/EBITDA of 7.74, especially considering revenue is expected to grow 17% in 2023. While trailing twelve month income margin of 8% and gross profit margin of 22.5% aren’t very exciting, they are better than most peers. The balance sheet has improved considerably with around $30 million of debt paid down in 2021. If you exclude capital leases, the company has no net debt. With $24.4 million of cash on the balance sheet, a low valuation and expectations of future growth, this buyback announcement makes sense.

In the future, the company is focused on geographical expansion by opening new STK restaurants across the globe. The two headwinds the company will face will be high inflation in food prices and a potential pullback in consumer spending once the pandemic related rebound in travel subsides.

Welcome to edition 24 of Buyback Wednesdays, a weekly series that tracks the top stock buyback announcements during the prior week. The companies in the list below are the ones that announced the largest buybacks as a percentage of their market caps. They are not the largest buybacks in absolute dollar terms. A word of caution. Some of these companies could be low-volume small-cap stocks with a market cap below $2 billion.

On September 9, 2022, the Board of Directors of this online fashion retailer approved a new share repurchase program authorizing the company to repurchase up to $10 million of its class A common stock equal to nearly 47% of its market cap at announcement.

Please note that this is a micro-cap stock that has been unprofitable for several years and has consistently posted negative free cash flow.

On September 7, 2022, the Board of Directors of this entertainment-based technology company approved an additional share repurchase program authorizing the company to repurchase up to $200 million of its class A common stock equal to nearly 23% of its market cap at announcement.

On September 12, 2022, the Board of Directors of this basic organic chemical manufacturer approved a new share repurchase program authorizing the company to repurchase up to $50 million of its class A common stock equal to nearly 16% of its market cap at announcement.

On September 7, 2022, the Board of Directors of this independent energy company approved a new share repurchase program authorizing the company to repurchase up to $500 million of its class A common stock, equal to nearly 10% of its market cap at announcement.

On September 13, 2022, the Board of Directors of this technology solutions provider approved a new share repurchase program authorizing the company to repurchase up to $300 million of its class A common stock, representing nearly 9.2% of its market cap at announcement.