Buyback activity ramped up this week at the start of earnings season with 35 companies announcing buybacks this week. The company that topped the list is Olin Corporation (OLN), manufacturer and worldwide distributor of chemical products. On July 28, 2022, Olin announced a new $2 billion buyback announcement representing around 27% of its market cap at announcement. A total of 14 companies including OLN announced buybacks that crossed the $1 billion mark.

The energy giants, Shell Plc (SHEL), Chevron (CVX) and TotalEnergies (TTE), announced $6 billion, $5 billion and $2 billion buybacks each representing around 3.2%, 1.56% and 1.58% of their market caps at announcement respectively. Airbnb (ABNB) and Diamondback Energy (FANG) also announced huge buybacks of $2 billion each. The biggest buyback in terms of dollar terms was by Charles Schwab (SCHW), a $15 billion buyback representing around 13% of its market cap at announcement.

Airbnb (ABNB) reported very strong results yesterday with revenue increasing 57.6% year-over-year to $2.1 billion, posting EPS of 56 cents and generating positive free cash flow. In fact free cash flow was up $1.1 billion compared to the depths of the pandemic in Q2 2020. To put this in perspective, Airbnb generated $795 million in FCF in Q2 2022 compared to Marriott’s $508 million and Hilton’s $326 million. Long stays, those greater than 28 nights, were a big driver of growth and the impact of the company exiting its domestic China business did not have much of an impact (about 1% of revenue). The company expects a strong second half of the year based on booking it is already seeing for Q4 2022. It was interesting to hear on the earnings conference call that the top three professions of Airbnb hosts were school teachers, healthcare workers and students. The stock, which was already up 31% in the last month, gave back some of those gains after hours.

Olin Corporation announced financial results for the second quarter ended June 30, 2022. It reported  net income of $422.1 million or $2.76 per diluted share compared to $355.8 million or $2.17 per diluted share in Q2 2021. Sales increased in the second quarter of 2022 to $2,616.1 million compared to $2,221.3 million in the second quarter of 2021. The company did not perform well during the pandemic but has picked up considerable momentum since then. The stock is cheap with an EV/EBITDA below 4, the lowest in the past 5 years. This along with the strong $1.77 billion in cash flow during the trailing twelve months could be the reason management decided to announce a buyback. The company has net debt of $2.85 billion, which is nearly 40% of its market cap.

During the first half of 2022, OLN repurchased around 8% of shares outstanding for $689.7 million from cash flow, while maintaining its net debt levels. Scott Sutton, Chairman, President, and Chief Executive Officer, said, “Additionally, the new $2 billion share repurchase program reflects our Board of Directors’ confidence in Olin’s future earnings and cash flow generation. With our solid balance sheet and strong cash flow, we are well positioned to execute on this attractive opportunity to invest in Olin.” 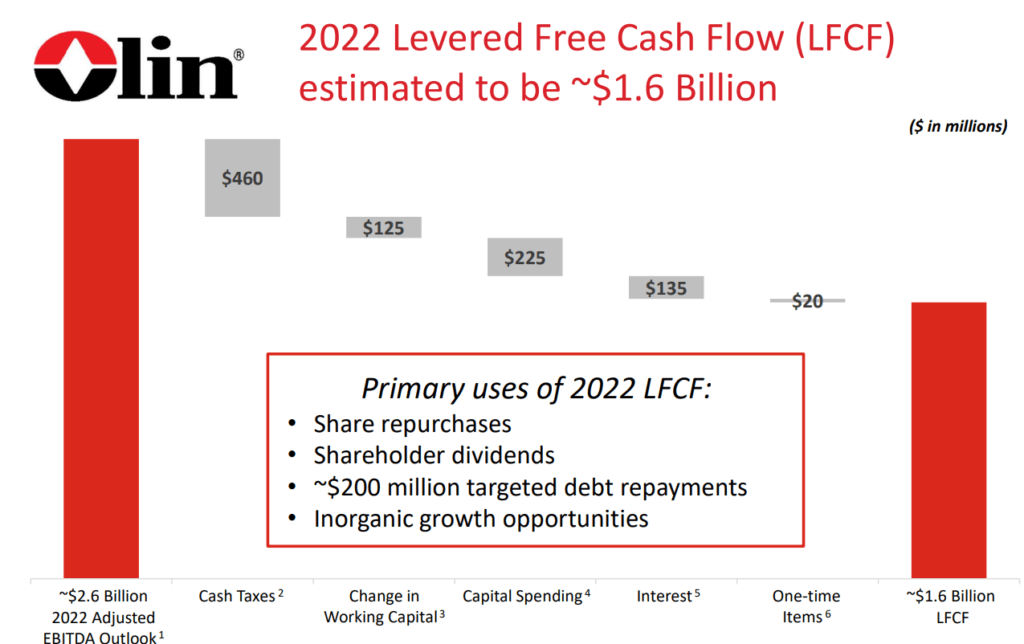 Welcome to edition 18 of Buyback Wednesdays, a weekly series that tracks the top stock buyback announcements during the prior week. The companies in the list below are the ones that announced the largest buybacks as a percentage of their market caps. They are not the largest buybacks in absolute dollar terms. A word of caution. Some of these companies could be low-volume small-cap stocks with a market cap below $2 billion.

On July 28, 2022, the Board of Directors of this global manufacturer and distributor of chemical products and a leading U.S. manufacturer of ammunition approved an additional share repurchase program authorizing the company to repurchase up to $2 billion of its class A common stock, representing nearly 26.6% of its market cap at announcement.

On July 28, 2022, the Board of Directors of this leading diversified media company approved an additional share repurchase program authorizing the company to repurchase up to $1.5 billion of its class A common stock, equal to nearly 19.2% of its market cap at announcement.

On July 28, 2022, the Board of Directors of this footwear designer and distributor approved an additional share repurchase program authorizing the company to repurchase up to $1.2 billion of its class A common stock equal to nearly 15.7% of its market cap at announcement.

On July 28, 2022, the Board of Directors of this finance and insurance company approved a new share repurchase program authorizing the company to repurchase up to $3 billion of its class A common stock equal to nearly 14.5% of its market cap at announcement.

On July 27, 2022, the Board of Directors of this oil and gas equipment and services provider approved a new share repurchase program authorizing the company to repurchase up to $400 million of its class A common stock equal to nearly 13.3% of its market cap at announcement.