Joel Greenblatt had a lot of success investing in spinoffs and generated outsized returns for his hedge fund Gotham Capital from 1985 to 1994. We wrote the following about him in 2018, 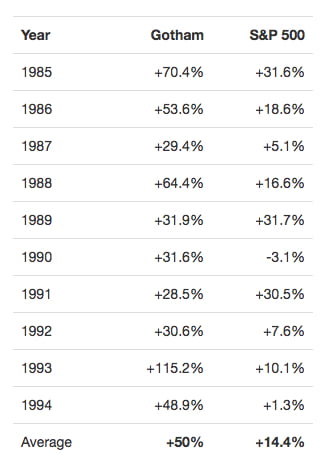 Joel Greenblatt, the founder of the hedge fund Gotham Capital and adjunct professor at Columbia Business School, managed to build a stellar track record from 1985 to 1994 with average returns of 50% per year by focusing on special situations and event-driven strategies. He published You Can Be a Stock Market Genius in 1997 and made the case for tracking spin-offs and especially paying attention to insiders of spin-offs.

In a premium post we wrote in August 2019, we elaborated further that,

Greenblatt’s experience with merger arbitrage was however not pleasant as a number of deals he invested in failed. Over the last year, the tables have turned with merger arbitrage providing better prospects and spinoffs not generating the kind of returns one would expect. Even spinoffs and Reverse Morris Trust transactions with insider buying have seen their stocks drop dramatically. A couple of examples of this include the spinoff of Cars.com (CARS) from the company formerly known as Gannett, Co. (TGNA) and Entercom Communications (ETM) merging with CBS Radio in a tax-free Reverse Morris Trust transaction.

One of the reasons for this lackluster performance of spinoffs is the increased attention spinoffs have received in recent years. The behavioral situation that Greenblatt benefited from was indiscriminate selling of the spinoff by fund managers because it did not fit their investment objectives. This left the spinoff company trading at an attractive valuation and provided opportunities for event driven investors or retail investors that could trade some of these small-cap spinoffs. This advantage appears to have disappeared as more market participants are paying attention to spinoffs, leaving few opportunities for mispricings.

The other change I noticed is that, in some instances, the spinoff is created to divest underperforming assets and to load the balance sheet of the spinoff with debt. This leaves the parent with both better assets and often stronger balance sheets. We discussed one such situation last year related to the spinoff of the REIT Retail Value (RVI) from the mall-based retail REIT DDR (now called SITE Centers)

Over the last several months we have been seeing insider buying in Apartment Investment and Management Company, also known as AIMCO (AIV), by its director Terry Considine including a $2.11 million purchase last week. Mr. Considine got started in real estate when he started investing in and operating apartment and commercial properties while he was still a student at Harvard University in the late 1960s and early 1970s. He founded a REIT while he was at Harvard Law and was one of the co-founders of AIMCO, which went public in 1994 with Mr. Considine as its CEO. Compared to its larger apartment REIT brethren like Avalonbay Communities (AVB) and Essex Property Trust (ESS), AIMCO tended to trade at a discount on account of lower margins and because it had class B and class C properties in its portfolio.

AIMCO decided to split itself into two publicly traded REITs last December, Apartment Income REIT Corp (AIRC) and AIMCO (AIV). AIRC was structured to have a portfolio worth approximately $10.4 billion and AIV would retain a $1.3 billion portfolio and would retain the company’s development and redevelopment business according a September 2020 investor presentation. AIRC picked up nearly 82% of the combined company’s portfolio and pays a quarterly dividend of 44 cents translating to a yield of 2.62% at current prices. Mr. Considine is the CEO of AIRC and a director of AIV post spin-off. 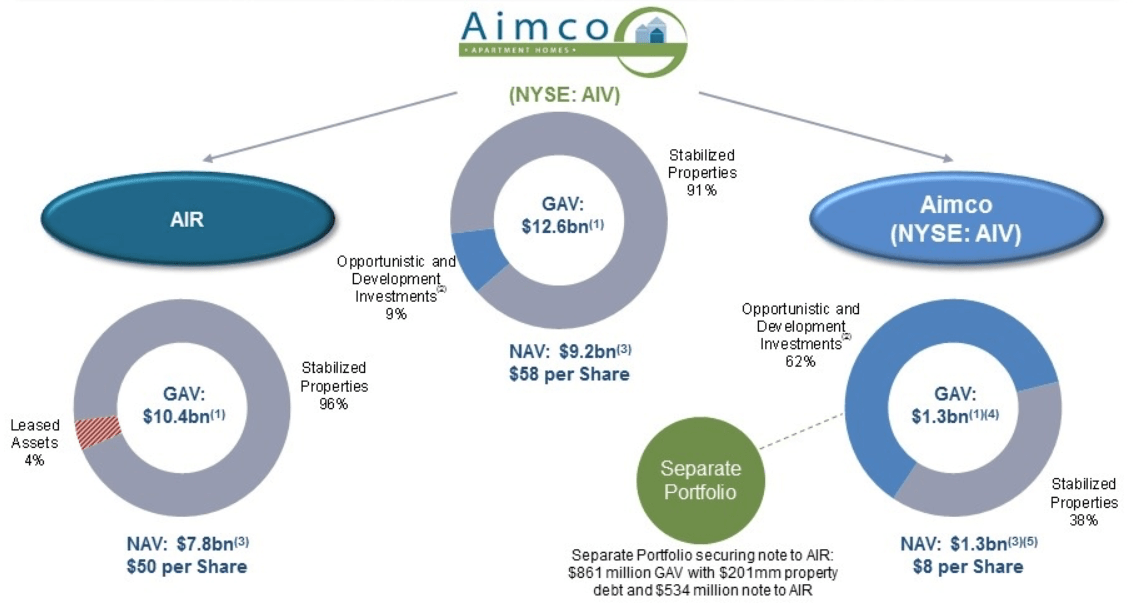 We track the performance of companies and their insider transactions post spin-off and in this case both the spin-off (AIRC) and the parent (AIV) have done well with gains of 31% and 43% respectively. Considering AIV is focused on their development and redevelopment property business and is not expected to pay a dividend anytime soon, it was surprising to see it has performed better than AIRC. In many ways, it reminds me of American Homes 4 Rent (AMH), a single family home rental company we have written about many times in the past and that I invested in several years ago.

The behavior of insiders at both AIRC and AIV have been diametrically opposite. While the insiders of AIRC have been selling stock, the insiders of AIV, primarily Mr. Considine, have been buying stock. When an insider of a company in a spinoff situation buys stock, I pay attention and even more so if the insider has been involved in the industry across multiple boom and bust cycles. Just like with AMH, which has an unusually low yield for a REIT, the goal with AIV appears to be to build a portfolio of premium properties over time and the returns will follow in the long run. I’ve looked into AIV several times since the spin-off but decided to hold off on making an investment. These purchases by Mr Considine warrant a deeper look into the company.

Sell/Buy Ratio: The insider Sell/Buy ratio is calculated by dividing the total insider sales in a given week by total insider purchases that week. The adjusted ratio for last week went up to 46.11. In other words, insiders sold over 46 times as much stock as they purchased. The Sell/Buy ratio this week was unfavorable compared to the prior week when the ratio stood at 23.02.

You can view the list of recent insider transactions for Ault Global Holdings, Inc. here.

Shares of this in vitro diagnostics company were acquired by 2 insiders:

You can view the list of recent insider transactions for Accelerate Diagnostics, Inc. here.

Director Terry Considine acquired 305,375 shares of this residential REIT, paying $6.92 per share for a total amount of $2.11 million. These shares were purchased indirectly by a retirement plan.

You can view the list of recent insider transactions for Apartment Investment and Management Company here.

Shares of this retail REIT were acquired by 3 insiders:

You can view the list of recent insider transactions for Agree Realty Corporation here.

Chief Executive Officer Anthony M. Jabbour acquired 14,000 shares of this integrated software, data, and analytics solutions provider, paying $68.84 per share for a total amount of $963,701. These shares were purchased indirectly through a trust.

You can view the list of recent insider transactions for Black Knight, Inc. here.

Shares of Alphabet were sold by 3 insiders:

Shares of Adobe were sold by 4 insiders:

You can view the list of recent insider transactions for Adobe Inc. here.

You can view the list of recent insider transactions for Warner Music Group Corp. here.

Disclaimer: I hold long positions in American Homes 4 Rent (AMH), Cars.com (CARS), Audacy (AUD) and Site Centers (SITC). Please do your own due diligence before buying or selling any securities mentioned in this article. We do not warrant the completeness or accuracy of the content or data provided in this article.