As North America’s largest moving and storage operator, AMERCO (UHAL) is a company that we’ve written about many times in the past, including our July 2021 Newsletter, in which we wrote about the company’s key business — U-Haul,

The name U-Haul is synonymous with “do-it- yourself” moving and storage. The company rents its distinctive orange and white U-Haul trucks and trailers and also offers self-storage units through a network of over 2,100 Company-operated retail moving stores and nearly 21,100 independent U-Haul dealers.

The company also sells U-Haul brand boxes, tape and other moving and self-storage products and services to customers through its distribution outlets and through its website.

AMERCO is a family-run business, founded by Leonard Samuel and Anna Mary Shoen in 1945, and is currently run by Edward Joe Shoen. Mr. Edward Shoen (one of Leonard’s twelve children) successfully led a coup in 1986 to take over the company after Leonard began to expand past the core U-Haul business into ventures such as item rentals. After taking control, Mr. Edward Shoen scaled the business back, shifting focus to the U-Haul sector once again by adding more than 80,000 trucks to the fleet. AMERCO eventually went public in 1994 for $1.73 (adjusted for stock splits) and in 2010, the company acquired Collegeboxes – a student summer storage and shipping provider. While over 90% of AMERCO’s revenue comes from their Moving and Storage Operating Segment (the segment that includes U-Haul), the company also offers Property and Casualty Insurance as well as Life Insurance.

We wrote about AMERCO in our July 2021 Special Situations Newsletter following insider purchases by both Edward Shoen and Mark Shoen (another son of Leonard’s, and currently a 10% owner) in a transaction by Willow Grove Holdings (which is primarily owned by the Shoen brothers) that totaled over $45 million. We wrote the following in our June 20th, 2021 Insider Weekends post:

These purchases were probably prompted by the greater than 14% decline in the stock price of AMERCO over the last month. This decline has occurred despite the company reporting earnings of $31.15 per share for fiscal 2021 ended March 31, 2021, which is more than double earnings from fiscal 2020 after you remove the one-time benefit from the CARES Act in fiscal 2020. The company reported record operating income in fiscal 2021 on account of favorable macro conditions where a lot of people moved during COVID-19 and either used U-Haul’s trucks to move or used their self storage facilities. These tail winds will eventually slow down and the company is having a harder time acquiring trucks to fuel its growth.

The stock reflects these concerns and is down from an intraday high of $657.86 in March 2021 to current levels. Despite this pullback, the stock is still trading well above its pre-pandemic range of $350 to $400. Obviously this is not the same company either and the balance sheet is much stronger now than it was pre-pandemic. Trading at less than 9 times cash flow, the stock is not expensive as long as it has not yet hit its cyclical peak.

Since then, the stock did peak at a high of around $760 (~$76 split adjusted) back in November 2021, and Edward Shoen bought around $10 million worth of the stock once more in December 2021, when it was trading at around $720 (~$72 split adjusted). On November 10th, 2022, a 10:1 stock split was announced, and from November 16th onwards, a series of large insider purchases were made by President Edward Shoen (through Willow Grove Holdings) and Director James J. Grogan.

AMERCO’s stock has dropped from its peak, but investors appear to be enthusiastic about its prospects with the stock up 24% since the initial insider purchase on November 16th. Revenue and net income have steadily risen year-over-year, although the company has missed EPS estimates during the last three quarters. On November 13th, AMERCO announced that both its voting stock (UHAL) and its newly created non-voting stock (UHALB) would begin to trade on the NYSE instead of the NASDAQ and that the company’s name would be changed to U-Haul Holding Company. Both of these changes will go into effect on December 16th, 2022. The company also established a 4 cents per share quarterly dividend for its non-voting stock (UHALB). Voting shares (UHAL) will not receive these dividends.

As reported in its fiscal Q2 2023 (ended September 2022) results, AMERCO saw a $17 million year-over-year decline in revenue for their self-moving equipment rentals , but much of that can be attributed to the reversal of pandemic related migration revenue. Despite revenue declining, the number of independent dealers, vehicles in the fleet, and retail locations actually increased. Furthermore, over the last 12 months, AMERCO added nearly 5.4 million square feet of storage to their assets, and self-storage revenues increased by $32.1 million compared to Q2 2022. Compared to the same period, the monthly average of occupied units also rose by 14%. In their 16th Annual Investor Webcast, AMERCO shared their plans for further self-storage development, which includes adding over 5.5 million square feet of self-storage to their existing system in the upcoming 12 months. Below is an image taken from the presentation, and it displays the development pipeline for AMERCO’s self storage assets. 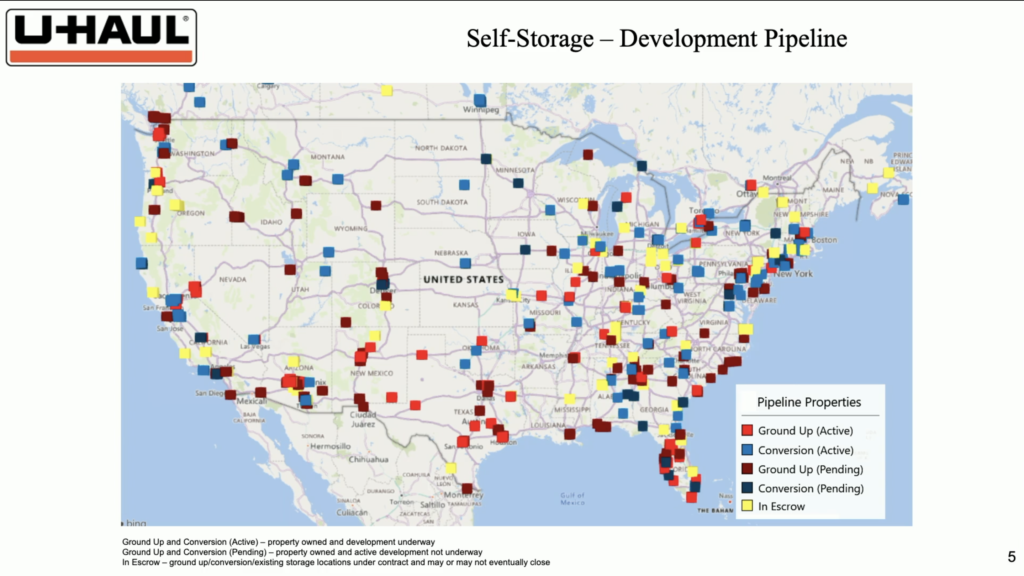 I decided to exit our AMERCO position from the model portfolio seven months ago and wrote the following in our May 2022 Special Situations Newsletter,

Inflation and input costs remain key concerns going forward and because we are fully invested and I want to make room for new positions in the model portfolio, I am going to sell two positions that are likely to be the most impacted by macro headwinds. I am going to sell AMERCO (UHAL) and Atlas Air Worldwide (AAWW). Both U-Haul and a plane leasing company are going to be impacted by high fuel costs and I would rather take a small loss now than a big one later. I don’t have these capital constraints in my personal portfolio and will continue to hold them there to ride out this cycle.

For a period of time it looked like I made the right decision to exit AMERCO as the stock was range bound for the next six months after I exited the position in the model portfolio. However the stock has seen strongly upward momentum in recent weeks driven partially by insider purchases and the stock is up 35% during the last month. In fact Atlas Air Worldwide (AAWW) also went on to do very well thanks to a $102.50 all cash acquisition by the private equity firm Apollo Global Management (APO). The arbitrage spread on that deal is 2.3% or a yield of 7.16% if the deal closes by the end of Q1 2023. I held on to AMERCO until August and still hold Atlas Air Worldwide in my personal portfolio.

With a TTM P/E of 12.43 and an EV/EBITDA of 7.05, AMERCO is not expensive, especially considering the potential growth in its self-storage division. When I exit a stock, I usually add it to a watchlist because it is a whole lot easier to analyze a company you have owned in the past. I’ll be monitoring the stock in case an opportunity presents itself for us to get back into the stock.

Sell/Buy Ratio: The insider Sell/Buy ratio is calculated by dividing the total insider sales in a given week by total insider purchases that week. The adjusted ratio for last week dropped to 5.75. In other words, insiders sold almost 6 times as much stock as they purchased. The Sell/Buy ratio this week was favorable compared to the prior week when the ratio stood at 8.45.

Shares of U-Haul’s parent company were acquired by 2 insiders:

Shares of this clinical-stage biotech company were acquired by 4 insiders:

You can view the list of recent insider transactions for Iovance Biotherapeutics, Inc. here.

Executive Chairman Robert M. Friedland acquired 422,767 shares of this mineral exploration and development company, paying $9.85 per share for a total amount of $4,164,255. Mr. Friedland increased his stake by 4.72% to 9.39 million shares with this purchase.

You can view the list of recent insider transactions for Ivanhoe Electric Inc. here.

Director Robert Robotti acquired 66,501 shares of this offshore marine support and transportation services provider, paying $30.05 per share for a total amount of $1.99 million. These shares were purchased indirectly by Ravenswood Management Company, LLC.

You can view the list of recent insider transactions for Tidewater Inc. here.

Shares of this software and services company were sold by 2 insiders:

You can view the list of recent insider transactions for PTC Inc. here.

Shares of Airbnb were sold by 2 insiders:

You can view the list of recent insider transactions for Airbnb, Inc. here.

Shares of this software-based platform for mobile app developers were sold by 3 insiders:

You can view the list of recent insider transactions for AppLovin Corporation here.

You can view the list of recent insider transactions for MACOM Technology Solutions Holdings, Inc. here.