Buyback activity almost doubled last week with 18 companies announcing buybacks compared to only 8 companies in the prior week. The biggest buyback announcement in dollar  terms was by Mastercard Incorporated (MA). Mastercard announced a $9 billion share buyback following the completion of its previous share repurchase program of $8 billion announced in November 2021. The company has bought back more than 7% of its shares outstanding since Q3 2018. During the third quarter of 2022, Mastercard repurchased 4.7 million shares at a cost of $1.6 billion and paid $474 million in dividends. Investment research services provider, Morningstar, Inc. (MORN) also announced a new three-year $500 million share buyback today representing around 5% of its market cap at announcement.

The stock that caught our attention this week was Owens Corning (OC). It also tops our list with a 10 million additional buyback representing around 11% of its market cap at announcement. OC is a global building and construction materials manufacturer. The company’s main business segments are insulation, roofing, composites, and other building products.

The company has been consistently buying back its stock. It has repurchased a little less than 6 million shares so far in 2022. In the third quarter, the company repurchased 2.5 million shares of common stock for $206 million. This is its second buyback announcement this year. The first one was also an additional 10 million buyback that was announced on February 16, 2022, and represented around 10.4% of its market cap at announcement. A total of 17.4 million shares now remain available for purchase from both these buyback programs.  OC also announced a 50% increase in its dividend to 0.52/share for the third quarter of 2022. This puts the company’s forward dividend yield at a modest 2.34% with a 11.25% payout ratio.

OC’s revenue has increased at a steady clip over the last seven years except for a slight dip during the pandemic. Revenue jumped more than 20% to $8.5 billion in 2021 and it is possible we might see some mean reversion in the coming years.  It has grown its revenue and earnings at a CAGR of over 10% and 44% respectively over the last 3 years.

Through the third quarter, the company launched 46 new or improvised products across its global businesses and reported strong Q3 2022 results.  The company grew its revenue in all its segments with third-quarter revenue of $2.5 billion, a 14% increase over Q3 2021. The insulation, composites and roofing business recorded strong sales of $965 million, $638 million and $1 billion, an increase of 18%, 8% and 15% respectively from Q3 2021. While the U.S. contributes 67% of Owens Corning’s revenue, its international business is growing, particularly in Europe. The firm’s European revenue grew from just 10% of total revenue in 2015 to 16% TTM. 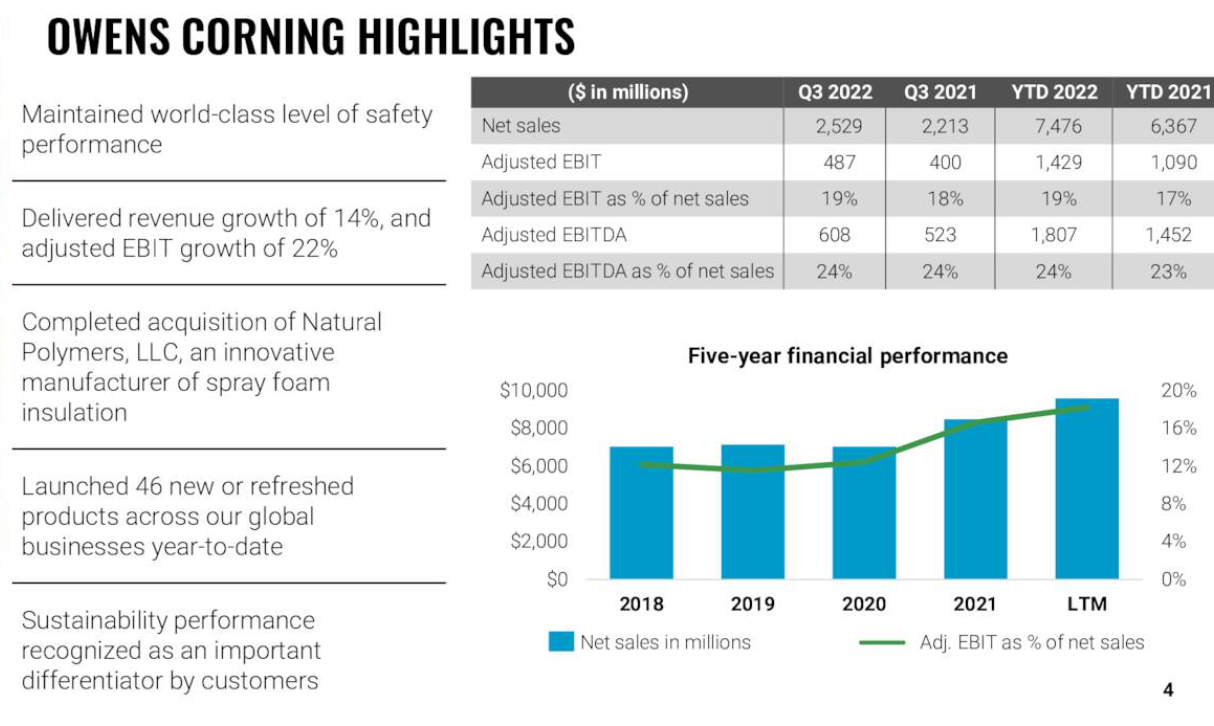 OC reported adjusted EBIT of $487 million, up 22% year-over-year and adjusted earnings of $347 million, or $3.57 per diluted share, compared to $262 million, or $2.52 per diluted share in Q3 2021. OC beat earnings estimates in all previous eight quarters and revenue estimates in 7 out of the last 8 quarters. OC generated free cash flow of  $367 million in Q3 compared to $361 million in the previous quarter. The company’s free cash flow has been growing significantly with over $1 billion in FCF generated in 2021 and a little under a billion dollars TTM. The company’s net debt of $2.4 billion should not present any issues if FCF continues anywhere close to current levels.

The company’s gross profit margin of 27.5% (TTM) is its best in 3 decades. However, its peers Fortune Brands Home & Security, Inc. (FBHS) and Builders FirstSource, Inc. (BLDR) have much higher gross margins of 36% and 34% respectively. Given the low gross margin, it is surprising the company managed to squeeze out net income margin of 14%.

The stock is cheap with EV/EBITDA just below 5, the lowest since 2006. The forward P/E is 6.69. OC is clearly a cyclical stock and cyclical stocks tend to appear cheapest at their peaks.

Owens Corning has shifted more of its business away from its industrial-focused composites segment to insulation and roofing segments over the past few years. These two segments accounted for 64% of total revenue in 2015 and have grown to 73% of total revenue over the trailing twelve months. Over the past 5 decades, weather-related disasters have increased fivefold and this unfortunate trend could positively impact OC’s roofing segment.

I am always fascinated when I see cyclical companies deploy a large portion of their capital to buying back stock at or near their peaks. OC feels a little different because the company has executed well over the last several years but the stock is only up 1% during the last five years. In this case, given the low valuation, it is possible that the buybacks are justified.

Welcome to edition 36 of Buyback Wednesdays, a weekly series that tracks the top stock buyback announcements during the prior week. The companies in the list below are the ones that announced the most significant buybacks as a percentage of their market caps. They are not the largest buybacks in absolute dollar terms. A word of caution. Some of these companies could be low-volume small-cap stocks with a market cap below $2 billion.

On December 2, 2022, the Board of Directors of this insulation, roofing, and fiberglass composite materials manufacturer approved an additonal share repurchase program authorizing the company to repurchase up to 10 million shares of its class A common stock equal to nearly 10.7% of its market cap at announcement.

On November 30, 2022, the Board of Directors of this investment holding company approved a new share repurchase program authorizing the company to repurchase up to $20 million of its class A common stock, equal to around 10% of its market cap at announcement.

On November 30, 2022, the Board of Directors of this identity verification services provider approved a new share repurchase program authorizing the company to repurchase up to $100 million of its class A common stock equal to nearly 8% of its market cap at announcement.

On December 2, 2022, the Board of Directors of this business advisory firm approved an additional share repurchase program authorizing the company to repurchase up to $400 million of its class A common stock, representing nearly 7% of its market cap at announcement.

On December 1, 2022, the Board of Directors of this financial services company approved a new share repurchase program authorizing the company to repurchase up to $1.5 billion of its class A common stock equal to nearly 6% of its market cap at the announcement.