Stock buybacks for U.S. firms are expected to reach a record $1.25 trillion this year. Beyond a temporary spike related to accelerated repurchases to beat the 1% tax on buybacks that kicks in next year, buyback growth is likely to slow down in the near future because of declining earnings growth and shrinking cash balances. At the very time companies should be considering increasing their buybacks, they are likely to pull back. A great example of this is technology companies that have reported disappointing Q3 results. Facebook’s parent company, Meta Platforms (META) lost more than 70% of its value YTD as its stock fell from a high of over $341 to below $100. Meta announced two buybacks last year, in January 2021 and October 2021, totaling $75 billion. Its last buyback of $50 billion was announced when the stock was trading at $328.69. It is interesting to note that Meta has not announced any buybacks this October although its price dropped significantly. We are also yet to see any insider purchases at Meta. During the past year, Meta has repurchased $42 billion of stock at an average price of $300.

On the other hand, energy majors have made significant buyback announcements this year. TotalEnergies SE (TTE), announced a share buyback of up to $2 billion in the third quarter while Shell Plc (SHEL) intends to repurchase another $4 billion of shares over the next three months, bringing the total repurchases for the year to $18.5 billion. BP p.l.c (BP) also announced a $2.5 billion share repurchase this week representing around 3% of its market cap at announcement. Energy companies are investing in production increases but they are also returning cash to shareholders after several difficult years that saw a large number of smaller energy companies go bankrupt.

We are seeing buyback activity pick up among regional banks and 10 such banks announced shares repurchases in October. Insider buying at regional banks also increased in recent days.

As companies have started to announce their Q3 earnings, buyback activity picked up momentum last week with 27 new buyback announcements.

The buyback announcement that caught my attention this week was by United Rentals (URI). On October 26, URI announced a $1.25 billion buyback representing around 6% of its market cap at announcement. URI has been consistently buying back its stock and has reduced its shares outstanding by 25% since 2015.

URI does well during recessions because businesses are more likely to rent equipment than purchase their own during downturns. Increase in government infrastructure spending should also help URI. Residential construction, primarily multi-family, constitutes only 4% of URI’s business. As multi-family and single-family housing construction slows on account of rising rates, the impact on URI should be low. 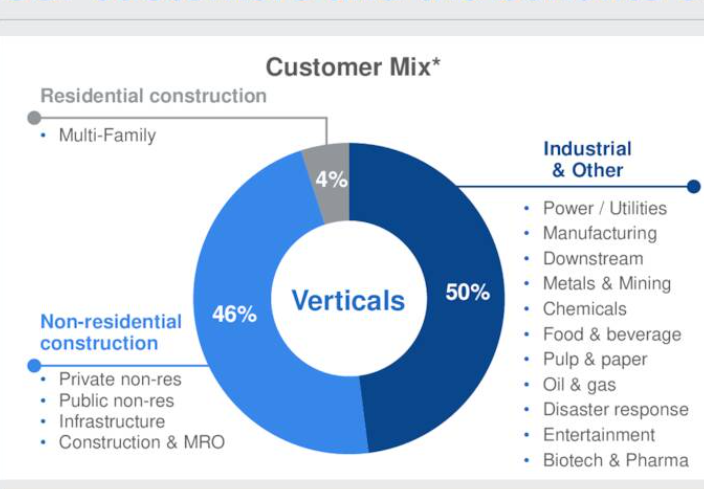 URI has a market cap of $21.88 billion and an enterprise value of $31.92 billion. The company’s gross profit margin of 42.2% and net income margin of 17.5% are respectable. The stock trades at a P/E of 11.4 and a forward P/E of 9.5. The stock appears cheap and management’s decision to continue buying back stock makes a lot of sense.

Welcome to edition 31 of Buyback Wednesdays, a weekly series that tracks the top stock buyback announcements during the prior week. The companies in the list below are the ones that announced the largest buybacks as a percentage of their market caps. They are not the largest buybacks in absolute dollar terms. A word of caution. Some of these companies could be low-volume small-cap stocks with a market cap below $2 billion.

On October 26, 2022, the Board of Directors of this building products distributor approved a new share repurchase program authorizing the company to repurchase up to $2 billion of its class A common stock equal to nearly 18.4% of its market cap at announcement.

On October  27, 2022, the Board of Directors of this automotive retailer approved an additional share repurchase program authorizing the company to repurchase up to $1 billion of its class A common stock equal to nearly 17.4% of its market cap at announcement.

On October 26, 2022, the Board of Directors of this independent natural gas and oil company approved an additional share repurchase program authorizing the company to repurchase up to $1 billion of its class A common stock, representing nearly 9.2% of its market cap at announcement.

On November 1, 2022, the Board of Directors of this car dealership approved an additional share repurchase program authorizing the company to repurchase up to $450 million of its class A common stock equal to nearly 8.3% of its market cap at the announcement.

On October 27, 2022, the Board of Directors of this financial technology service provider approved an additional share repurchase program authorizing the company to repurchase up to $500 million of its class A common stock, equal to nearly 7.6% of its market cap at announcement.

Voluntary Disclosure: I hold a long position in META.