We first wrote about Continental Resource in our August 2020 Special Situations Newsletter, after witnessing significant insider buying across the energy industry. We wrote the following in the newsletter,

In this challenging environment it is hard to think about companies on the long side but the insider purchases by Harold Hamm in the energy production company Continental Resources last month stood out for its sheer size. The April swoon in energy prices, which at one point saw West Texas Intermediate (WTI) futures dip into negative territory for the first time ever, roiled energy markets worldwide. The global benchmark Brent oil futures did not come close to the decline WTI futures experienced but most energy companies were hit hard by the COVID-19 related collapse in demand and the sudden drop in oil futures.

Harold Hamm started buying shares of Continental Resources on the open market on June 23rd and over the course of the next two weeks acquired 10.55 million shares worth $178 million at an average price of $16.87. Following these purchases, he now owns 295.47 million shares representing 81% of the total shares outstanding. Harold Hamm feels so strongly about just how undervalued CLR is that he took the unusual step to announce his purchases through a press release where he stated,

“I firmly believe Continental’s current share price reflects an uncommon value as the global pandemic has negatively impacted worldwide crude oil demand. Recent purchases underscore my confidence in the Company’s continued operational excellence and strong financial performance. Continental is poised to deliver significant shareholder value for many years to come and I believe there is no management team more aligned with shareholders than Continental”

I am normally skeptical when insiders issue a press release following an insider purchase as it appears that they are signaling the market, which could very well be the case here. The interesting part of the press release was that he also indicated that he has set up 10b5-1 purchase plan indicating he is likely to continue buying more CLR stock.

On June 14, 2022, we added Continental Resources (CLR) as a potential deal in the works, when the board of directors of the company received a non-binding proposal of $70 per share from Harold G. Hamm. CLR’s price went up to $74.22 after this announcement. The stock subsequently dropped into the low $60s providing an excellent opportunity to pick up the company before the official acquisition announcement. We picked the stock for the second time in July 2022 when CLR was trading at $65.35.

On October 17, 2022, Harold Hamm entered into an agreement to buy shares of Continental Resources not owned by him and his family for $74.28 per share in cash or $4.3 billion, taking one of the largest U.S. oil and gas producers private. The deal comes at a time when investors are putting pressure on U.S. shale companies to return more cash to shareholders and spend conservatively on production.

According to the Financial Times, Hamm said in a note to staff,

“We have all felt the limits of being publicly held over the last few years, and in such a time as this, when the world desperately needs what we produce, I have never been more optimistic,”. The shale tycoon said privatization would give the company “freedom to explore” for more oil and grow “as we do our part to help secure America’s energy independence without any encumbrances”.

We added Continental Resources to the InsideArbitrage Model Portfolio in August 2020, and the position has become the best performer, up 328%. 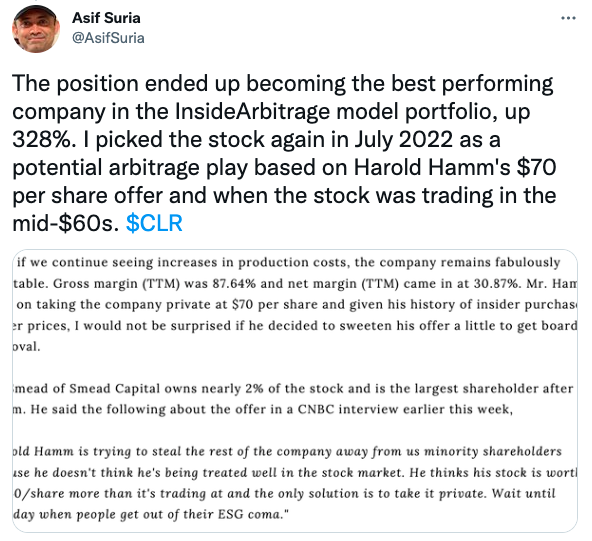 Two new potential deals were added to the ‘Deals In The Works‘ section last week.

There were nine new SPAC combinations announced, and one terminated last week. You can find new SPAC IPO announcements in our SPACs tool here.

Disclaimer: I have long positions in Activision Blizzard (ATVI), Spirit Airlines (SAVE), Atlas Air Worldwide (AAWW), Twitter (TWTR), First Horizon (FHN), Tower Semiconductor (TSEM) and TEGNA (TGNA). Please do your own due diligence before buying or selling any securities mentioned in this article. We do not warrant the completeness or accuracy of the content or data provided in this article.