Buyback activity edged up a little last week with 14 companies announcing buybacks. AutoZone (AZO), an uber cannibal, announced an additional $2.5 billion buyback representing around 6% of its market cap at announcement. Since the start of the repurchase program in 1998, and including the above amount, AutoZone’s Board of Directors has authorized $33.7 billion in share repurchases. The company has bought back more than 24% of its outstanding shares in the last 5 years.

The buyback that topped our list this week was a $200 million new buyback by DiamondRock Hospitality Company (DRH), a REIT that owns a portfolio of geographically diversified hotels. The buyback represents about 13% of its market cap at announcement. We have also been seeing an uptick in insider purchases at REITs after the asset class was crushed in a rising interest rate environment.

I first came across MINISO during a trip to Southern California last year. The store was filled with interesting knick-knacks, mostly targeted towards kids but I was able to find a good quality travel neck pillow at a great price. I initially though that the store was run by a Japanese company like Uniqlo because of the similarity of their logos and the overall feel of the store. When doing research on the company following this buyback, I realized that the Japanese inspired look was intentional. MINISO’s founder came up with the concept after visiting Japan and hired Japanese designer Miyake Junya as its Chief Designer. The company recently started experiencing backlash on social media from its Chinese customers and has decided to ditch its Japan inspired styling, at least in the company’s Chinese stores.

I was surprised to find a MINISO store while walking down a street at a popular shopping destination in Mumbai this summer. Founded in 2013 by Ye Guofu, the retailer has seen tremendous growth in overseas revenue because of its international expansion. This higher-margin international business is now growing far faster than domestic sales in China. In the company’s first quarter of fiscal 2022, revenue from international markets jumped 78% year-over-year, more than four times its domestic growth. MINISO plans to open four new stores in Italy this year, bringing its total to 14 since its start in April. Across Europe the company has nearly 170 stores. As of June 2022, the company had 5,199 stores with 3,226 stores in China and the rest across nearly 90 overseas markets. Recently on October 1, 2022, the company opened its 2,000th international store in France. The table below shows how the company has expanded globally in a short span of time. 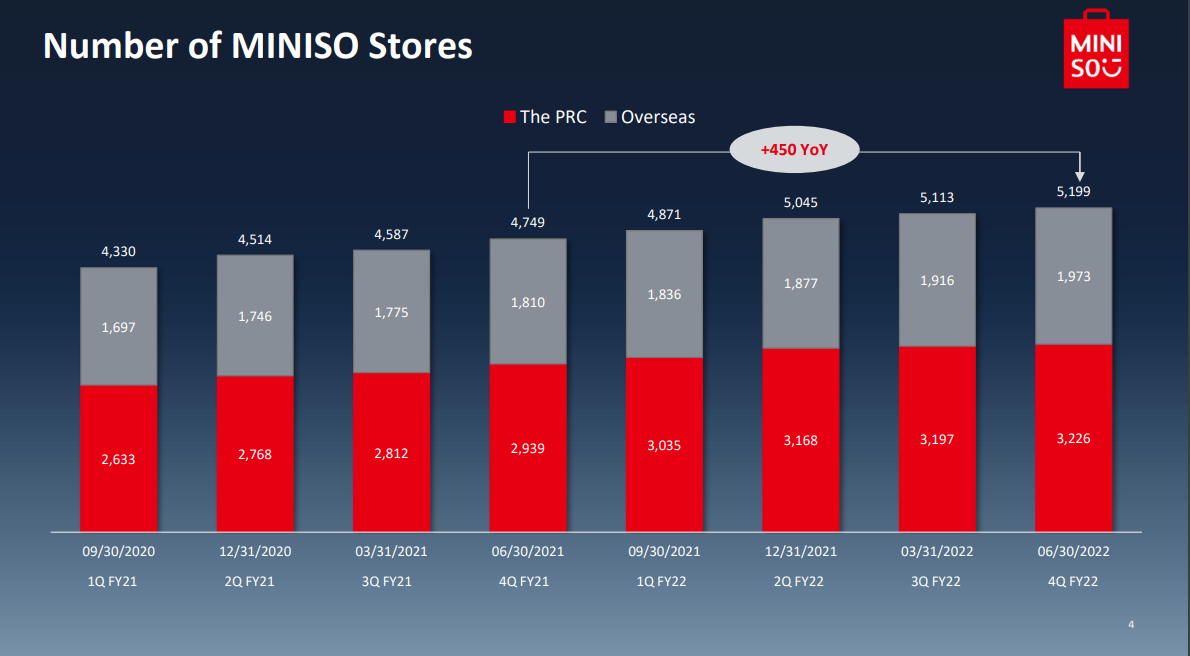 MINISO follows a franchise model, inviting franchisees from a long list of countries. The unique feature of this franchise model is that it owns the inventory for outlets run by its franchisees. As overseas sales led its revenue growth, the company’s overall gross margin reached a record high of 33.3% in fiscal Q4 2022, ended June 30, 2022. Adjusted operating margin and adjusted net margin for the June quarter were 12.4% and 9.6% respectively, the highest in the last 10 quarters. Net profit increased by 57% year-over-year.

Because of its rapid global expansion, revenue growth is expected to be in the double digits going forward. The company has $1 million in debt and $865 million in cash & short-term investments. This lack of net debt is surprising given the company’s rapid global expansion. The stock trades at a forward P/E of 12.15 and a forward EV/EBITDA of 3.8. With no debt and significant cash in hand, the buyback announced by the company following a 60% drop in the stock price over the last year makes sense.

Some risks to keep in mind include a drop in revenue in fiscal Q4 2022 compared to the same quarter last year despite the opening of several new stores. The fact that this is a Chinese company listed on a U.S. stock exchange is also of concern. The company’s founder announced his intention to buy up to $5 million worth of MINISO stock using his personal funds. While insider buying is often positive, I perceive press releases announcing insider purchases as red flags.

Welcome to edition 27 of Buyback Wednesdays, a weekly series that tracks the top stock buyback announcements during the prior week. The companies in the list below are the ones that announced the largest buybacks as a percentage of their market caps. They are not the largest buybacks in absolute dollar terms. A word of caution. Some of these companies could be low-volume small-cap stocks with a market cap below $2 billion.

On September 29, 2022, the Board of Directors of this hotel real estate investment trust (REIT) approved a new share repurchase program authorizing the company to repurchase up to $200 million of its class A common stock equal to nearly 12.73% of its market cap at announcement.

On September 27, 2022, the Board of Directors of this manufacturing services provider approved a new share repurchase program authorizing the company to repurchase up to $1 billion of its class A common stock equal to nearly 12.66% of its market cap at announcement.

On September 30, 2022, the Board of Directors of this transportation and logistics solutions company approved a new share repurchase program authorizing the company to repurchase up to $40 million of its class A common stock, representing nearly 11.4% of its market cap at announcement.

On September 28, 2022, the Board of Directors of this oil and natural gas company renewed its share repurchase program receiving regulatory approval to repurchase up to 24,846,855 shares of its class A common stock equal to nearly 9.8% of its market cap at the announcement.

On September 30, 2022, the Board of Directors of this firearms, hunting and camping products company approved a new share repurchase program authorizing the company to repurchase up to $10 million of its class A common stock, equal to nearly 8.4% of its market cap at announcement.