Investors that use the merger arbitrage strategy are well aware that their average odds of success are around 95%. An announced deal with a merger agreement has a very high probability of closing. But you know what they say about averages. A six foot tall person can drown in a river that is on average about five feet deep. Deals fail because regulators block the deal on competitive or national security concerns, shareholders vote down the deal, the acquiring party is unable to raise the money needed or in rare instances there is a material adverse event (MAE).

The last time I analyzed both closed and failed deals by mining data from our database was more than 5 years ago when I wrote a trio of articles for Seeking Alpha including,

Collecting Pennies In Front Of A Bulldozer: How Likely Are You To Be Run Over?

Still Collecting Pennies In Front Of A Bulldozer

More than 1,000 additional mergers and acquisitions were announced since I wrote those articles and it felt like it was time to refresh the analysis to seek answers for the following questions,

The summary table of how many deals were were consummated, failed, received new offers and that remain still active is show below by the year the deals were announced. Since a large number of deals announced in 2022 are still active, I would discount that data. Even after removing 2022 data, 95% of all deals were successful.

Have the odds of success changed after we experienced a pandemic and a bear market in 2022?

The answer is both yes and no. We did see the failure rate edge up during the pandemic and the success rate for deals dropped to 90%. While luxury jeweler Tiffany was able to get the global luxury giant LVMH to close on its deal with a small price cut, not every deal escaped the pandemic unscathed. The merger of aerospace focused companies Hexcel (HXL) and Woodward (WWD),  the acquisition of Front Yard Residential (RESI) by Amherst Residential and many others failed because of a material adverse event (MAE). Certain 2020 vintage deals like the acquisition of Willis Towers Watson (WLTW) by Ann Plc (AON) and the acquisition of Aerojet Rocketdyne (AJRD) by Lockheed Martin (LMT) also failed because of regulatory issues.

How long does it take on average for deals to close?

For arbitrageurs to achieve satisfactory annualized results, the time a deal takes to close, is important. If a typical deal takes six months to close instead of four months, that means your money gets one less turn that year. A deal with a 5% spread that closes in six months, implies an annualized return of 10%. A deal with a 5% spread that closes in four months, implies a more attractive 15% annualized return, assuming you can reinvest the proceeds into similar deals. A key question arbitrageurs are trying to answer is how long a particular deal will take to close. There is quite a bit of variability based on industry, the regulatory environment, whether it is a cross-border deal, etc. Pharma deals, where a large pharma company is buying a pipeline stage biotech company tend to close quickly, while semiconductor deals tend to take much longer because of national security concerns and approvals needed from multiple countries. Banking and insurance deals also take longer as numerous regulators are involved in the approval process.

Analyzing our list of 2,320 completed deals, I noticed that on average deals took 131 days to close. The median time to completion was just 107 days, implying that some outlier deals like the acquisition of Change Healthcare by UnitedHealth Group (UNH) that took 635 days to complete or the acquisition of Xilinx by AMD that took 475 days to complete, skew the average. The standard deviation for this dataset was 93. When I computed these numbers six years ago in October 2016 for 1,268 deals, the average time to completion was 122 days and the median was 101 days. The pandemic not only put a dent in the success rate but deals are taking longer to close in a more challenging regulatory environment.

Why do deals fail?

Failure in arbitrage land is not perceived the same way it is perceived in life or in entrepreneurship. Failure is not the stepping stone to success. Failure in arbitrage hurts. When a deal with 5% upside blows up, it can wipe out anywhere from 30% to 50% of your capital. This might be the reason arbitrageurs have gone on to have very successful investing careers after they left the arbitrage world. You are constantly assessing the probability of success, trying to figure out what could go wrong and paying attention to details that other investors might ignore.

The corollary to this is that deals sometimes trade at wider spreads than they should and for the risk arbitrageurs who like to go out on the risk spectrum, this can turn into a high risk/high return roller coaster, especially when leverage is involved. 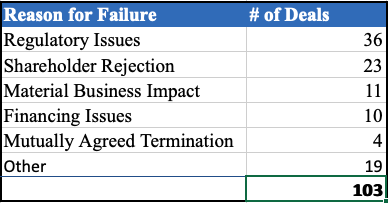 As you can see from the table above, regulatory issues remain the main reason for deal failure, accounting for more than a third of all failures. While two companies, including Change Healthcare, recently challenged the Department of Justice in court and won, this is not common. Antitrust and cross-border issues will continue to weigh on deals and these deals typically start their journey with large spreads as we saw with Kroger’s (KR) acquisition of Albertsons (ACI), which started trading with a juicy spread of 30%.

The news is not all bad. There are some deals that enter a bidding war as new parties emerge that are interested in the deal. The acquisition of Coherent by II-VI Incorporated (IIVI) went through a nine rounds of counter offers after the deal was announced. The acquisition of R. R. Donnelly & Sons similarly went through a bidding war that saw its final price of $10.85 end up 45% higher than the original offer of $7.50 from Chatham Asset Management. The battle for Straight Path Communications between AT&T (T) and Verizon (VZ) saw Straight Path’s stock price nearly double from the original deal price, with Verizon emerging the winner. In each of the last three years, we saw 3% of deals end up with higher offers.

Two large all cash deals that are currently trading at huge spreads and that look interesting include,

i) The acquisition of Spirit Airlines by JetBlue for $33.50 per share in cash. The stock is currently trading for $19.60, implying a spread of 71% on the deal. The stock is already below where it was trading before Frontier Airlines decided to merge with Spirit in February 2022 and JetBlue got involved in a bidding war. Besides the fact that airline stocks are generally bad investments and we are likely to enter a recession, the deal is essentially derisked but has huge upside if it manages to get regulatory approval.

Update: As a subscriber mentioned to me by email, the current deal price for new buyers of Spirit is $31. JetBlue plans to pay a $2.50 per share special dividend to Spirit shareholders but the record date for that special dividend was September 12, 2022.

ii) The acquisition of Activision Blizzard by Microsoft for $95 per share in cash is in a similar boat. The stock is trading at $72.11, implying a spread of 31.75%. The stock was trading at $65.39 before the deal was announced but the price was depressed because the company was sued by the California Department of Fair Employment and Housing (DFEH) on allegations of sexual harassment and employee discrimination. This lead to an investigation by the SEC, and resulted in multiple workplace walkouts. Several employees resigned or were dismissed, multiple company event sponsors were lost, and hundreds of workplace harassment allegations were made. Activision needs Microsoft to address some of these culture issues and Microsoft appears to be confident that they can get the deal over the finish line.

I normally don’t invest in deals with large spreads because the spreads imply that the market perceives a high risk of failure. In both these deals, I would not mind owning the stock even if the deal falls through and might even buy more if there is a significant price drop on account of forced selling after deal failure.

Voluntary Disclosure: I hold long positions in Spirit Airlines (SAVE) and Activision Blizzard (ATVI). Please do your own due diligence before buying or selling any securities mentioned in this article. We do not warrant the completeness or accuracy of the content or data provided in this article.