In our Capitulation or Forced Selling article last month, I wrote about how the extreme sell-off we saw in early May reminded me very much of the big moves in the 2008-2009 bear market where correlations went to 1 and multiple asset classes declined simultaneously. I came across a tweet last week that discussed bear market rallies based on work done by Stansberry Research covering the 2000-2002 and 2007-2009 bear markets. Having invested actively through both those deep bear markets, a comment following the tweet asking about the duration of those bear market rallies caught my attention. I was curious to see what the data could tell us about what we are experiencing in the current bear market.

The S&P 500 saw a lot of whipsaw action in the early days of the 2000-2003 bear market and it was not a straight line down as we saw exactly twenty years later in the March 2020 bear market. The first bear market rally of 2000-2003 registered a gain of just over 8% and managed to do so over a 10 trading day period. The first rally started 16 days after the March 2000 peak. The second rally lasted much longer at 69 trading days (over 3 months) and registered a gain of nearly 11%. 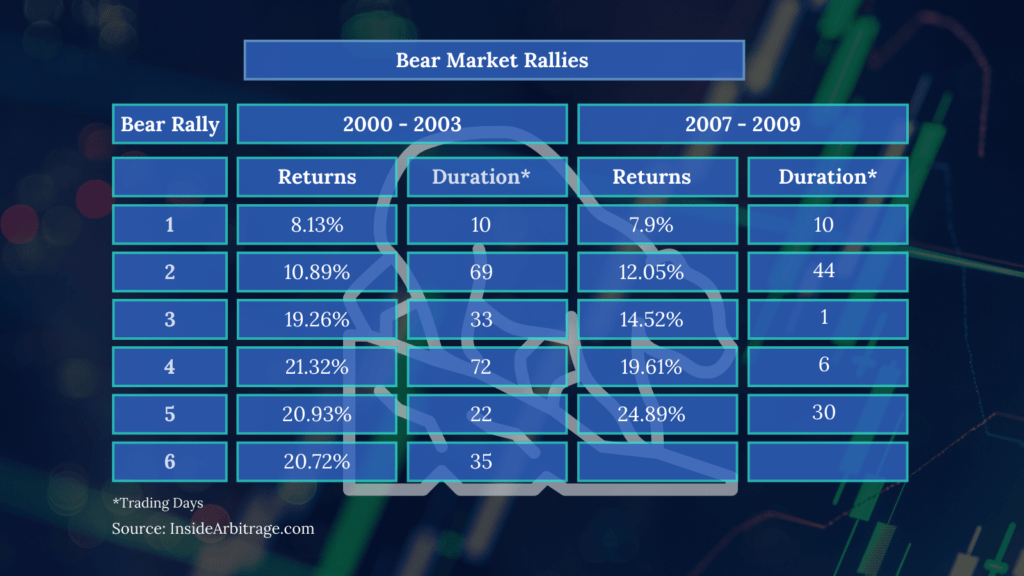 The one thing that stood out when looking closely at the data was that the gains of the later bear market rallies were significant. Essentially we saw multiple mini-bulls with gains of over 20% inside a secular bear market that got the hopes of investors up several times only to dash them harder as we experienced lower lows. While the dot com bubble bear market technically ended in October 2002, the market once again pulled off a 21% rally through November 27, 2002 before giving back most of those gains and getting within 3.6% of retesting those October 2002 lows by March 2003.

There must be something about March and the Spring season. March 2009 is also seared in my brain since it marked the end of the brutal bear market following the collapse of the 2005-2007 real estate bubble that shook the foundations of our entire financial system. The swings in that bear market were so wild that at one point in October 2008, about a month after the collapse of Lehman Brothers, we saw a single day jump in the S&P 500 of 14.52%.

As the season turns and the market rises with a new bull market, investors sometimes end up on the sidelines for several months or years as they don’t have the benefit of hindsight and at the current moment are experiencing pain that constantly appears to get worse. Missing this first leg back up can be equally damaging to a portfolio and hence the adage of not trying to time the market.

During the Great Recession of 2007-2009, it was the November 2008 bottom that got to me. I had continued actively investing right until that time. Had I stuck to my plan through the March 2009 bottom, I would have enjoyed significantly better outcomes coming out of that bear market. At least I can look back at the work I did during that time and find some solace in the fact that in February 2009, I was still looking for, writing about and buying new investments as I outlined in this case for the apartment REIT AvalonBay that was yielding over 8% at the time.

The start of the current bear market, if you can call it that, coincided with the first trading day of 2022. If you were to look at a specific sub-sector of the market, then SaaS stocks had started dropping months before the S&P 500 hit its peak on January 3, 2022. After an initial correction of 13% through the first week of March 2022, we saw a 11.23% rally through March 29, 2022. We only entered into bear market territory intraday in late May but when measured by the closing price, we are yet to hit the 20% bear market threshold. Unless the Fed backs away from quantitative tightening, we could see significant weakness in the coming months.

Each bear market is unique in its own way and the best we can do as investors is learn from history, focus on asset allocation and buy strong businesses at favorable prices over a period of time. A written plan of execution along with a watch list of opportunities can be tremendously helpful during a difficult time when emotions sometimes get the better of us. Having the humility to understand that we are not going to get the bottom exactly right and that we are likely to be early, should help us stay the course on this difficult journey.