Welcome to a new weekly series of articles we are launching today on Inside Arbitrage to track the top stock buyback announcements during the prior week. We have been tweeting about buybacks for several months as you can see below and decided to start writing about them in a weekly article to provide more context. 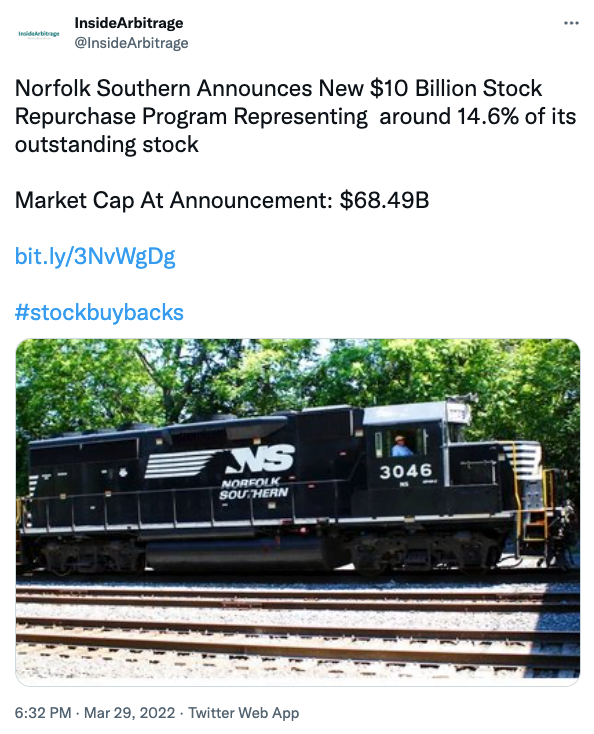 We wrote the following in a premium blog post almost four years ago when we first started tracking buybacks on Inside Arbitrage.

There has been a lot of academic research over the years that shows the superior performance of companies buying back their own stock. Recent research into the “uber cannibals”, defined as the top 5 companies buying back their own shares, by Mohnish Pabrai as discussed in the article Move Over Small Dogs Of The Dow, Here Come The Uber Cannibals, shows that the uber cannibals have outperformed the S&P 500 index by 6.3% annualized over a 26 year period. Not all buybacks are in the best interest of investors and we have all heard of companies like Citigroup (C) using capital to buy back shares right before the financial crisis. The company was subsequently forced to receive the biggest bailout of any American bank. On the other hand, we have also seen the masterful use of stock buybacks by some CEOs to generate outsized returns for their investors as discussed in the book The Outsiders by William Thorndike.

The companies in the list below are the ones that announced the largest buybacks as a percentage of their market caps. They are not the largest buybacks in absolute dollar terms. A word of caution. Some of these companies are microcaps with a market cap below $300 million. We might apply a filter going forward to exclude microcap stocks but the downside is that we would have missed Acacia Research (ACTG) had we applied that filter today.

The company in its own words, “seeks to acquire undervalued businesses with a primary focus on mature technology, life sciences, industrial and certain financial services segments, and pursues opportunities for value creation that leverage Acacia’s significant capital resources as well as its expertise in corporate governance and operational restructuring”. Acacia is not a hedge fund or a private equity firm as it initially seeks to establish a stock position in companies it finds undervalued followed by an acquisition. The company struck a partnership with Starboard Value in February 2020 and has over $1 billion in capital available for financing activities.

Net-net’s are often cheap for a good reason. Current assets may have a lot of inventory that is difficult to liquidate or accounts receivables that are hard to collect. The company may also be a money losing entity that will, over time, erode its sizable current assets. Both of these are not concerns with Acacia Research considering inventory and accounts receivables make up very little of the company’s current assets and the company managed to make money in each of the last three quarters and for the full year 2021. I have had good luck with a few net-nets in the past but each situation is unique and requires careful study to understand why it is undervalued and if there is a catalyst on the horizon that will unlock value. This is especially important if the company is a melting ice cube that loses money each quarter.

It was also interesting to note that three out of the five large buyback announcements were of Chinese companies. They are probably optimistic that Beijing might be able to work things out with Washinghton to avoid the delisting of Chinese stocks from U.S. exchanges.

Choosing to buyback stock is a capital allocation decision as it takes away capital that could have been invested in a new business division, used for M&A activity or returned to investors in the form of a special dividend. Just like insider transactions, stock buybacks are an idea discovery tool for us and a starting point for further research. Not all insiders are good at understanding the macro environment or valuation and not all management teams are good capital allocators.

On March 31, 2022, the Board of Directors of this investment company approved a new share repurchase program authorizing the company to repurchase up to $40 million of its Class A common stock equal to nearly 18% of the common shares of the company.

On March 31, 2022, the Board of Directors of this Chinese internet service provider approved a new share repurchase program authorizing the company to repurchase up to $20 million of its Class A common stock equal to nearly 17% of the common shares of the company.

On March 31, 2022, the Board of Directors of China-based online retailer approved a new share repurchase program authorizing the company to repurchase up to $1 billion of its Class A common stock equal to nearly 16.4% of the common shares of the company.

On March 30, 2022, the Board of Directors of China-based consumer finance service provider approved a new share repurchase program authorizing the company to repurchase up to $15 million of its Class A common stock equal to nearly 9.8% of the common shares of the company.

On March 31, 2022, the Board of Directors of this premium recreational boat retailer approved a new share repurchase program authorizing the company to repurchase up to $50 million of its Class A common stock equal to nearly 9.44% of the common shares of the company.

Beginner’s Luck: The Role of Risk in Life and in Investing
Deconstructing Form 4 Filings Filed By Company Insiders

Have We Bottomed Yet?