Merger activity was muted during the last week of the year 2021 with no new deals announced and two active deals consummated, one of which was completed just 39 days after the signing of the definitive merger agreement. This month we included a U.S. M&A special year end report in our January 2022 Special Situations newsletter in addition to highlighting two merger arbitrage opportunities as our spotlight ideas for the month. A snapshot of the special report is given below. 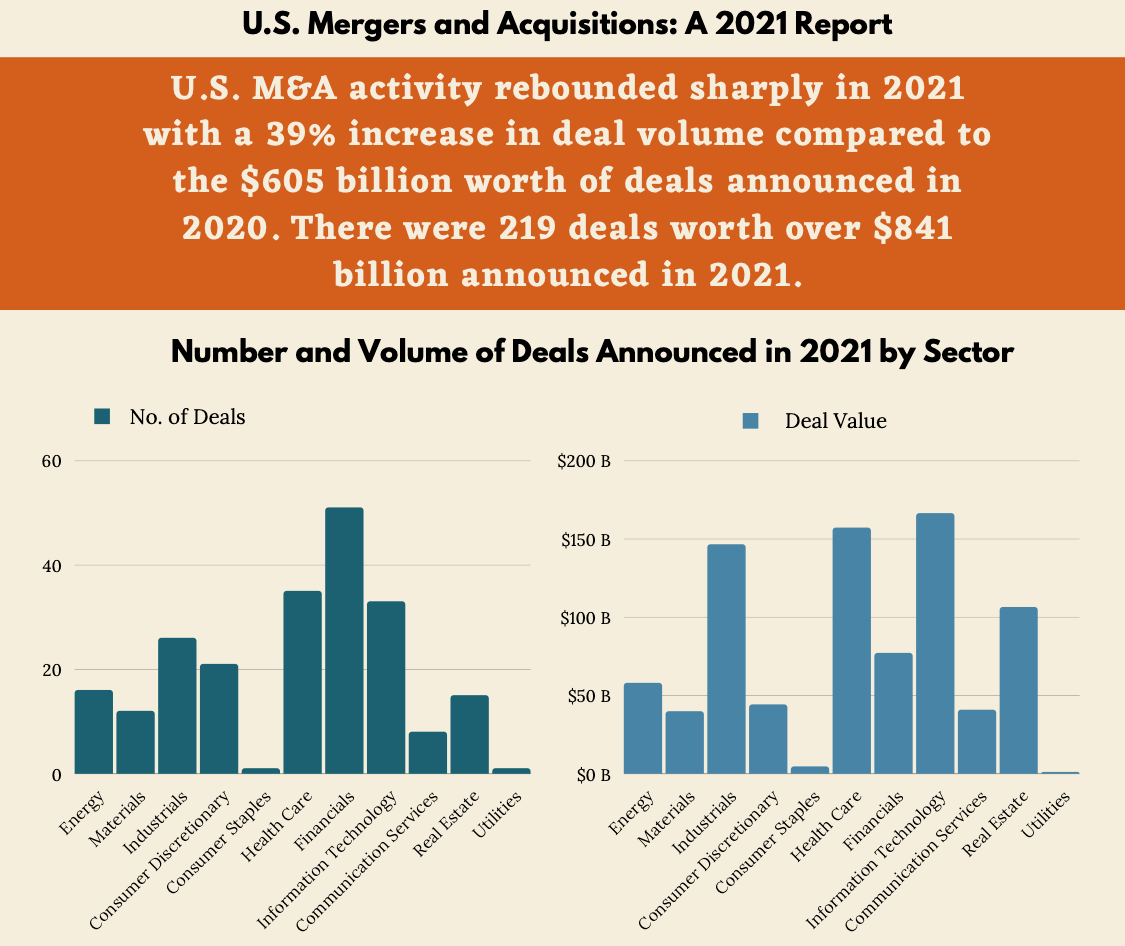 During 2021, we saw 16 deals terminated, which was marginally better than the 17 deals that were terminated in 2020 but the news was not all bad. Only 4 deals were terminated on account of regulatory issues. Seven deals were terminated because they received new offers and in many cases Christmas came early because the deals went through bidding wars that lasted multiple rounds. Before Coherent (COHR) terminated its merger agreement with Lumentum (LITE) and finally tied the knot with II-VI Incorporated (IIVI), the deal went through nine rounds of counter offers involving three different parties.

We are seeing something similar play out right now with the acquisition of R.R. Donnelley & Sons Company (RRD). The company has been in the middle of a bidding war between Atlas Holdings and Chatham Asset Management. We had added RRD to our list of potential deals on on October 12, 2021, when Chatham Asset Management, RRD’s largest bondholder offered to acquire the company for $7.50 per share in cash. RRD’s price after this announcement was $6.57. RRD, however entered into an agreement to be acquired by Atlas Holdings. We wrote the following in our Merger Arbitrage post titled: Merger Arbitrage Mondays – R. R. Donnelley To Be Acquired By Atlas Holdings

On November 3, 2021, R. R. Donnelley entered into a definitive merger agreement to be acquired by affiliates of Atlas Holdings for approximately $2.1 billion or $8.52 per share in cash. On the same day, Chatham enhanced its offer to acquire all the common stock of RRD not already owned by Chatham for a range of $9.00 to 9.50 per share in cash. RRD’s price went up to $9.11 after this offer was announced. Under the terms of the merger agreement, RRD may solicit additional acquisition proposals from third parties during a “go shop” period of 25 calendar days from the signing of the merger agreement. Given this bidding war, it is not surprising to see R. R. Donnelley trade at a negative spread of more than 7% to the $8.52 per share acquisition price.

For a company with $1.5 billion in net debt on the balance sheet and twelve continuous quarters of revenue decline before a 6.42% increase in revenue in Q3 2021, it is rather unusual that not just one suitor but two of them are competing to acquire R. R. Donnelley. The go shop period is very short and if the company’s management does not engage with Chatham, shareholders would end up with a sub-optimal outcome.

After multiple rounds of counter offers, RRD terminated its agreement with Atlas Holdings on December 14, 2021 and agreed to be acquired by Chatham Asset Management for $10.85 per share in cash. This increased bid was almost 45% higher than Chatham’s original bid of $7.50 for RRD on October 12, 2021. Much to the delight of arbitrageurs, the bidding war has still not ended. On December 29, 2021, RRD received an unsolicited non-bidding “Alternative Acquisition Proposal” from a strategic party to acquire RRD for $11.00 per share in cash.

The following seven deals had a closing date of December 31, 2021, but since they have not yet been completed, we are extending the closing dates for these deals to the end of the first quarter of 2022.

SPAC activity was also low with only three new SPAC IPOs filed. There were no new SPAC combinations announced last week.. You can find the new SPAC IPO announcements in our SPACs tool here.

The table below shows weekly spread changes between December 24 and December 31, 2021.

M&A activity in 2021 rebounded sharply with 219 deals announced that were worth over $841 billion in comparison to $605 worth of deals announced in 2020. 194 active deals were successfully completed and 16 active deals were terminated. 111 potential deals in the works were announced in 2021 and 44 of these entered into definitive merger agreements. We expect this momentum to continue in the first part of 2022 before tapering in the second half of the year. Widening spreads on account of perceived regulatory issues and potential interest rate hikes,  combined with bidding wars is going to make for fertile hunting grounds for arbitrageurs in 2022.

Disclaimer: I have long positions in Nuance Communications (NUAN), Change Healthcare (CHNG) and Pfizer (PFE). I also have put options in Change Healthcare. Please do your own due diligence before buying or selling any securities mentioned in this article. We do not warrant the completeness or accuracy of the content or data provided in this article.