Insiders of Netflix (NFLX) rarely tend to purchase shares of the company but when they do, I pay attention. The last time we saw an insider buy shares was in August 2019 when we saw  Director Brad Smith purchase $2 million worth of shares at an average price of $308.49 per share. Mr. Smith had served on Netflix’s board since March 2015 and this was his first purchase. The most memorable insider purchases of Netflix or of any company for that matter were the purchases by the Venture Capitalist and long-serving Director Jay Hoag who purchased shares in 2012 and 2016 both for his own portfolio (2012) as well as for his firm Technology Crossover Ventures (TCV). I wrote the following about Mr. Hoag’s purchases in February 2016,

TCV is a well known venture capital company that mostly invests in private companies but sometimes ventures into public markets. The company first invested in Netflix (NFLX) back in 1999 and Mr. Hoag’s purchase of Netflix shares in May 2012 at prices in the low $70’s (pre-split) were one of the best instances of insider purchases I have seen since I started tracking this data more than 5 years ago. Netflix shares had dropped dramatically before Mr. Hoag’s purchases on news that the company was going to split itself a DVD mailing service called Qwikster and a streaming service. Much to the relief of investors, the company eventually abandoned that plan and the stock eventually went up 10 fold. Unfortunately for TCV, they did not hold through that entire 1,000%+ increase. Netflix has gone on to more than quadruple from the time I wrote that in 2016 despite the recent pullback. Mr. Hastings’ purchase of Netflix is his first insider purchase since we started tracking insider transactions in 2010. The reason this purchase is all the more remarkable is that Mr. Hastings didn’t buy shares even during the depths of the 2008-2009 bear market. I found a form 4 filed by him on February 26, 2009 when he sold shares at a split-adjusted average price of $5.07 per share. Netflix split its shares 7 for 1 on July 15, 2015. The market bottomed just a few days later.

Bill Ackman’s Pershing Square Capital indicated in a shareholder letter that they had in recent days acquired 3.1 million shares of Netflix, making them a top 20 shareholder of Netflix. The reason Messrs. Hastings and Ackman are buying shares has to do with the greater than 37% plunge in Netflix stock during the last month thanks to a rotation away from growth stocks and Netflix’s fourth quarter new subscribers number coming in at 8.28 million instead of the forecasted 8.5 million. The bigger shock was probably Netflix’s guidance of 2.5 million new subscribers in Q1 2022. Ensemble Capital does a great job of breaking down this overreaction to subscriber number in their post Netflix’s Man Overboard Moment. 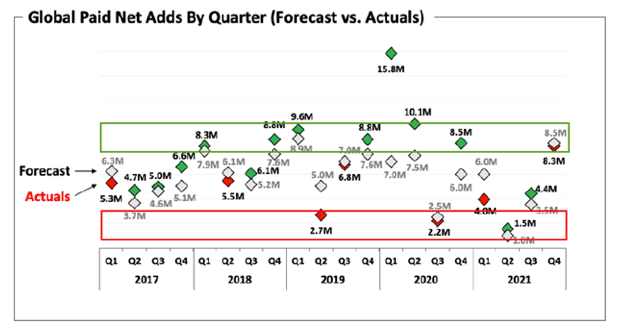 A few months I discussed a unique employee perk that Netflix provides in an article titled Netflix: A Trillion-Dollar Company? and explored where the company might be 10 years from now. I wrote the following in that article,

Netflix was growing its revenue more than 30% year-over-year a few quarters ago. The law of large numbers eventually catches up with every high-growth company, and as one would expect, their growth rate has moderated to the mid-20s over the last few quarters and is now just shy of 20%. I am going to make three key assumptions about the future:

Using the rule of 72, the stock should double in a little less than five years (a market cap of over $500 billion) and then would double again in the next five years. That would put Netflix’s market cap over $1 trillion by the end of the year 2031 and the stock would be trading close to $2,300 per share. Yes, those are a lot of assumptions and that is what makes this exercise both difficult and interesting.

Obviously, a lot has to go right for the optimistic scenario to play out. As discussed in this article by Akram’s Razor market penetration for Netflix in the U.S. is nearly 100%. This leaves international markets, which Netflix already has been growing for several years. I was discussing this with another friend and we both agreed that international growth, especially from countries like India, may increase revenue but will not be as profitable as the U.S. business. Pricing power will help move the needle some more in the U.S. as not many consumers are likely to notice or cancel their service for a $1 increase in monthly subscription fees. We also agreed that Netflix could use its network effects to enter adjacent markets. His bet was on Netflix entering the online education market, while I felt that gaming was a logical next step and it looks like that’s where Netflix is headed next.

Since I wrote that article last September, my expectations of a price increase and the company moving into adjacent markets have come to pass. Netflix announced the launch of games on mobile platforms  in November 2021 and a few days ago indicated that they were increasing prices on all U.S. plans anywhere from $1 to $2 per month. I was waiting for the dust to settle before starting a position in Netflix but this show of confidence by Reed Hastings and Bill Ackman might help the stock bottom sooner than I was expecting.

Sell/Buy Ratio: The insider Sell/Buy ratio is calculated by dividing the total insider sales in a given week by total insider purchases that week. The adjusted ratio for last week dropped to 2.15. In other words, insiders sold more than 2 times as much stock as they purchased. The Sell/Buy ratio this week was favorable compared to the prior week when the ratio stood at 5.62.

You can view the list of recent insider transactions for Asana, Inc. here.

Co-CEO Reed Hastings acquired 51,440 shares of Netflix, paying $388.83 per share for a total amount of $20 million. These shares were purchased indirectly by a trust.

You can view the list of recent insider transactions for Netflix, Inc. here.

You can view the list of recent insider transactions for OPKO Health, Inc. here.

Director Beat Kahli acquired 100,000 shares of this automotive electronics company, paying $10.18 per share for a total amount of $1.02 million. These shares were purchased indirectl by Avalon Park International, LLC.

You can view the list of recent insider transactions for VOXX International Corporation here.

You can view the list of recent insider transactions for Verizon Communications Inc. here.

Chairman Thomas Peterffy sold 120,000 shares of this investment brokerage for $68.22, generating $8.19 million from the sale.

You can view the list of recent insider transactions for Interactive Brokers Group, Inc. here.

Shares of this biotech company were sold by 2 insiders:

You can view the list of recent insider transactions for Moderna, Inc. here.

Director Richard T. Burke sold 9,000 shares of this health insurance provider for $469.00, generating $4.22 million from the sale. These shares were sold indirectly by a partnership.

You can view the list of recent insider transactions for UnitedHealth Group Incorporated here.

Shares of this cloud-based supply chain management solutions provider were sold by 3 insiders:

You can view the list of recent insider transactions for SPS Commerce, Inc. here.

You can view the list of recent insider transactions for Keurig Dr Pepper Inc. here.