Founded in 1973 in Dallas, Texas, The Michaels Companies is one of America’s largest arts and crafts retailer. I had been tracking the stock for several years when it looked incredibly cheap under $20 in 2017. However the leveraged balance sheet and a difficult retail landscape for brick-and-mortar retailers kept me away.

The stock began a long slow decline and hit a bottom during the pandemic at $1.46. The company saw significant momentum during the COVID-19 lockdown as most Americans who ended up working from home looked for DIY projects to redecorate. The company first went public in 1984. In 2006, Bain Capital and the Blackstone Group, purchased The Michaels Companies for $6 billion, taking it private. The company went public again in the year 2014. Earlier this month, Apollo Global Management expressed interest in acquiring Michaels. This potential deal was successful two days later when Michaels agreed to be acquired by APO in a transaction valued at $5 billion.

There were four new deals announced in the Deals in the Works section last week.

While merger activity has been interesting the last few weeks, most of the action appears to be concentrated in the SPAC space. There were an astounding 36 new SPAC IPOs and 7 new SPAC business combinations announced just last week. To put the level of SPAC activity in perspective, there were just 11 SPAC IPOs in all of Q1 2020. This comes at a time when growth stocks appear to have fallen out of favor and the spillover effect is being felt in SPAC land as you can see from this tweet from Chamath Palihapitiya. We covered his sale of Virgin Galactic (SPCE) in our latest insider weekends post. 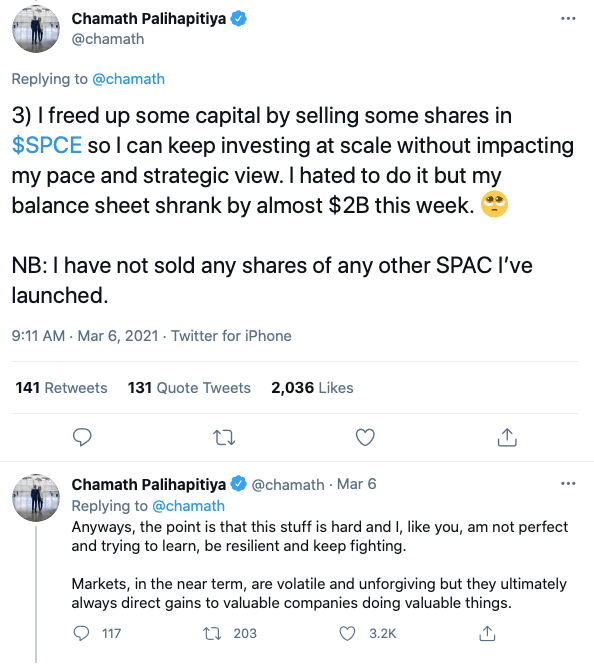 You can find the new SPAC IPO announcements in our SPACs tool here.

On March 7, 2021, The Wall Street Journal announced that Evolv Technology, a crowd-safety company backed by Microsoft co-founder Bill Gates and former Florida governor Jeb Bush will be going public by merging with the SPAC NewHold Investment Corp. in a deal valued at $1.7 billion.

Four out of the five new deals announced last week were multi-billion dollar deals. The aggregate deal consideration has hence increased to $512.58 billion this year. On the SPAC front, the number of new IPOs continued to rise significantly last week in spite of all the speculation about the SPAC frenzy fading out. Just like there were opportunities on the long side of the SPAC trade, we are likely to see interesting opportunities on the short side after some of the more speculative SPAC business combinations stumble in the coming years.

Disclaimer: I have long positions in Change Healthcare (CHNG) and Otelco (OTEL). Please do your own due diligence before buying or selling any securities mentioned in this article. We do not warrant the completeness or accuracy of the content or data provided in this article.

Insider Weekends: Chamath Palihapitiya Sells $213 Million Worth Of Virgin Galactic
From The Twitterverse