Insider activity has some seasonal effects where it ebbs and flows depending on whether companies are in earnings related quiet periods or not. We tend to see a significant slowdown in activity during the first month of each quarter and an increase in activity in the second month. When I saw this big spike in insider selling, I checked the data for every week of January for the last nine years and we have not seen this level of insider selling in a single week since 2012. Granted a big part of the spike last week was Carl Icahn selling $600 million worth of Herbalife (HLF) stock but even after excluding that sale, the level of insider selling far exceeds what we have seen in a single January week in the past nine years. I wrote the following in the conclusion to the U.S. Mergers and Acquisitions: A 2020 Report last night and this insider activity echoes that sentiment:

“As investors most of us came out of 2020 significantly ahead of where we started the year but the size of the current bubble has me very worried about 2021.”

Sell/Buy Ratio: The insider Sell/Buy ratio is calculated by dividing the total insider sales in a given week by total insider purchases that week. The adjusted ratio for last week went up to 43.32. In other words, insiders sold more than 43 times as much stock as they purchased. The Sell/Buy ratio this week compares unfavorably with the prior week, when the ratio stood at 13.17. 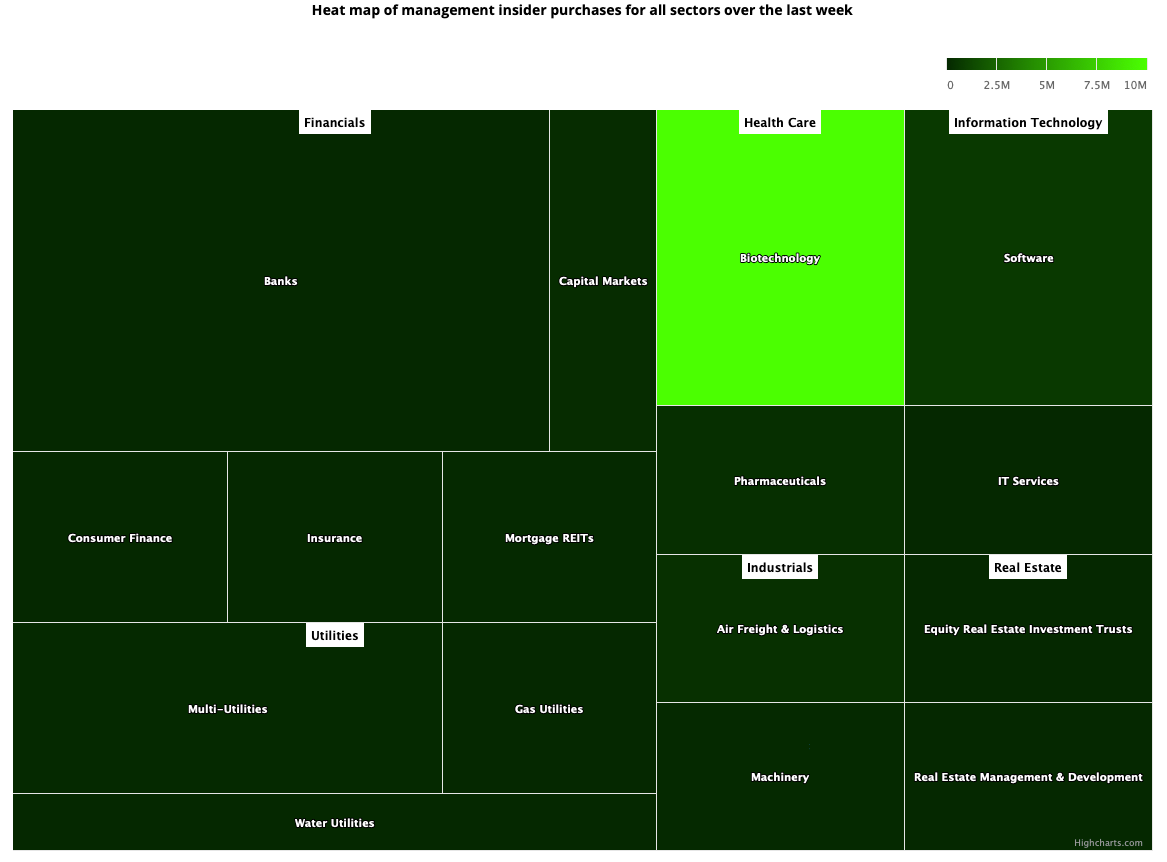 It is interesting to see an insider of Berkshire Hathaway buy shares even as the company was buying back its own shares. According to this Bloomberg article,

“Berkshire Hathaway Inc. spent the third quarter buying back about $9 billion of its own stock, more than it had repurchased in any full year in its history. The buying spree takes the total repurchases in the first nine months of 2020 to $16 billion”

We track these kinds of situations where both the insider and the company are buying shares in a screen called the “Double Dipper”. We limit this screen to management insider purchases but I am inclined to include Director purchases in the screen based on what I am seeing with this Berkshire Hathaway purchase. I tweeted the following about this purchase last week and you can read more about Mr. Olson here. 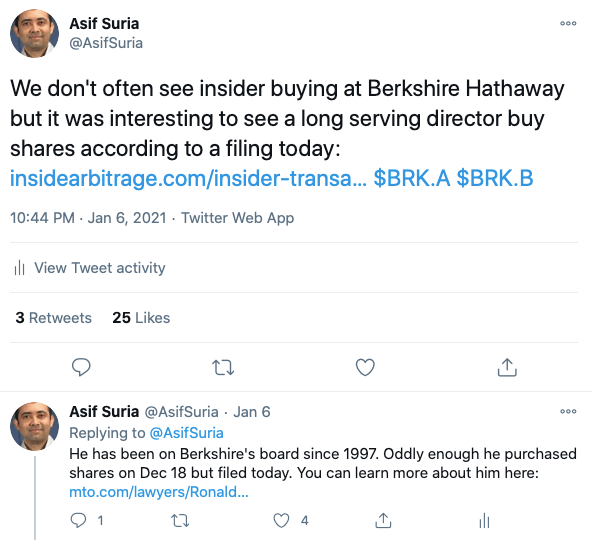 You can view the list of recent insider transactions for Berkshire Hathaway here.

I have been following Perrigo and other generic drug companies for several years but have stayed away from the group because of company specific problems (TEVA) or the price fixing lawsuits most of the generic drug companies have had to face. With Perrigo attempting to rebrand itself as a consumer products company and Mylan recently merging with Pfizer’s Upjohn generic drugs division in a spinoff called Viatris (VTRS), maybe the group deserves another look.

We mentioned Perrigo in May 2018 after Starboard Value got involved with the company and we wrote the following:

We normally tend to exclude purchases by funds but decided to make an exception in this case on account of activist investor Starboard Value’s excellent track record and because Perrigo is their top holding. Fortune magazine once called Starboard Value’s Jeff Smith “the most feared man in corporate america”. Over the last year while other value managers like David Einhorn and Bill Ackman have struggled, Starboard Value has continued to perform well as you can see from the chart below.

Perrigo has had a tough few years along with the rest of the generic drug industry as you can see from the following 5 year chart of Perrigo, where the company has underperformed the S&P 500 by almost 100%. An EV/EBITDA of over 12 with low single digit net profit margins does not put the company in solid value territory but Starboard Value clearly (sees) something more in the company and claimed Perrigo was their best idea last September. 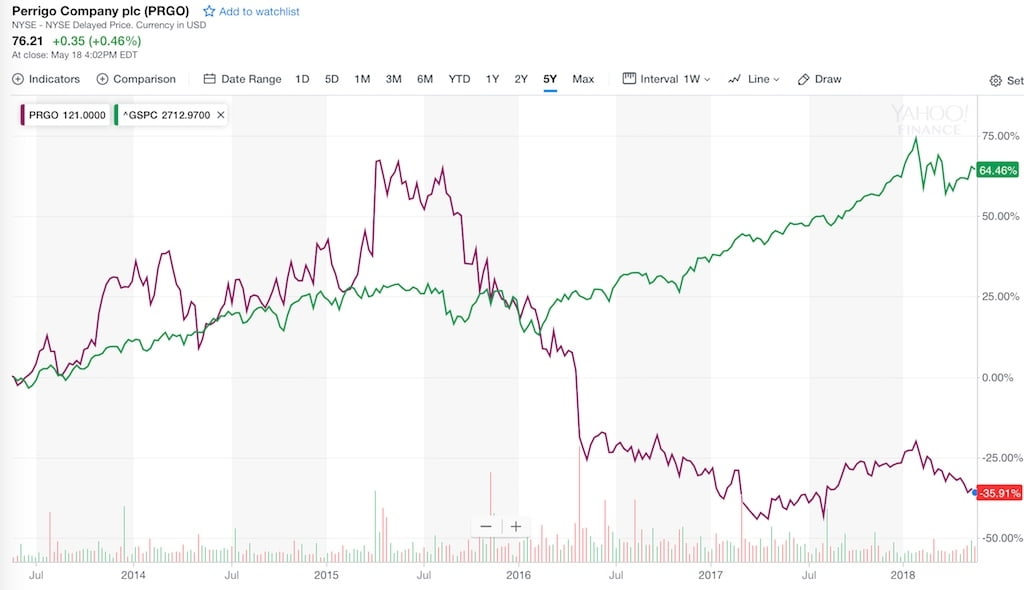 At the time we wrote that article, Perrigo had already lost more than half its value from a peak of over $200 per share in 2015. Unfortunately for Starboard Value, this proved to be just as much of a value trap as Macy’s did and the stock dropped an additional 41% since May 2018.

You can view the list of recent insider transactions for Perrigo Company plc here.

You can view the list of recent insider transactions for Atlantic Union Bankshares Corporation here.

Director Zachary Levenick acquired 20,000 shares of this operator of University bookstores, paying $4.73 per share for a total amount of $94,600. These shares were purchased indirectly by THG Securities Advisors LLC.

You can view the list of recent insider transactions for Barnes & Noble Education, Inc. here.

You can view the list of recent insider transactions for Arlington Asset Investment Corp. here.

Shares of this networking solutions company were sold by 5 insiders:

You can view the list of recent insider transactions for Arista Networks, Inc. here.

You can view the list of recent insider transactions for Medpace Holdings, Inc. here.

Executive Chairman and Co-Founder Robert A. Ortenzio sold 640,000 shares of this hospital operator for $29.97, generating $19.18 million from the sale. 256,000 of these shares were sold indirectly through a trust.

You can view the list of recent insider transactions for Select Medical Holdings Corporation here.

Shares of this software infrastructure company were sold by 4 insiders:

You can view the list of recent insider transactions for Palo Alto Networks, Inc. here.