Shares of Delphi Technologies (DLPH) shot up more than 60% after BorgWarner (BWA) announced that it was acquiring Delphi in an all stock deal. According to the press release, combining with Delphi Technologies is consistent with BorgWarner’s evolution towards the propulsion market of the future and would enable BorgWarner to maintain flexibility across combustion, hybrid, and electric propulsion (C-H-E).

On January 29, 2020, Alcentara Capital Corporation (ABDC) received shareholder approval for its acquisition by Crescent Capital. The deal was completed on January 31, 2020.

In the deal updates section for last week, Liberty Property Trust (LPT), Ladenburg Thalmann Financial Services (LTS) and William Lyon Homes (WLH) each received shareholder approval for their respective deals. The expected date of completion for all three deals has moved up to February, 2020.

Average Profit and Average Annualized Profit by Deal Type as on Friday, January 31, 2020 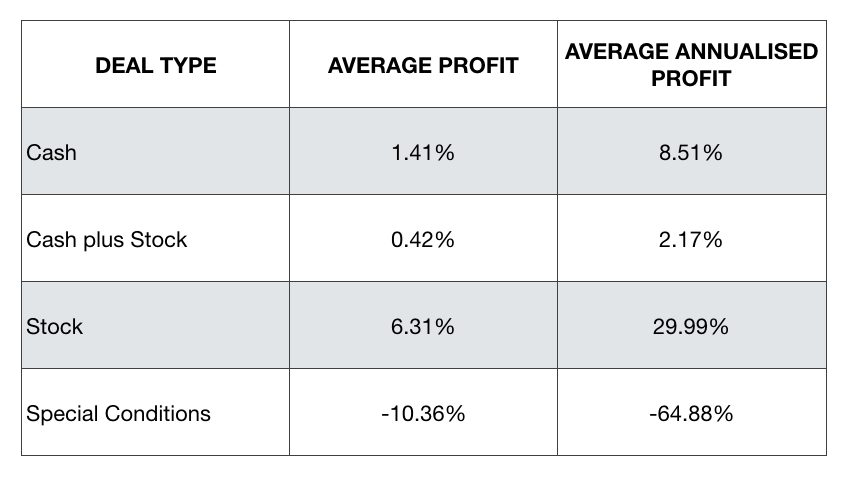 Merger activity increased last week with four new deals announced and four deals closing. You can find all the active deals listed below in our Merger Arbitrage Tool (MAT) that automatically updates itself during market hours.

There was one new deal announced in the Deals in the Works section.

Disclaimer: I hold long positions in Sprint (S) and Mellanox Technologies (MLNX). Please do your own due diligence before buying or selling any securities mentioned in this article. We do not warrant the completeness or accuracy of the content or data provided in this article.