Sell/Buy Ratio: The insider Sell/Buy ratio is calculated by dividing the total insider sales in a given week by total insider purchases that week. The adjusted ratio for last week dropped to 4.04. In other words, insiders sold more than 4 times as much stock as they purchased. The Sell/Buy ratio this week compares favorably with the prior week, when the ratio stood at 11.87. 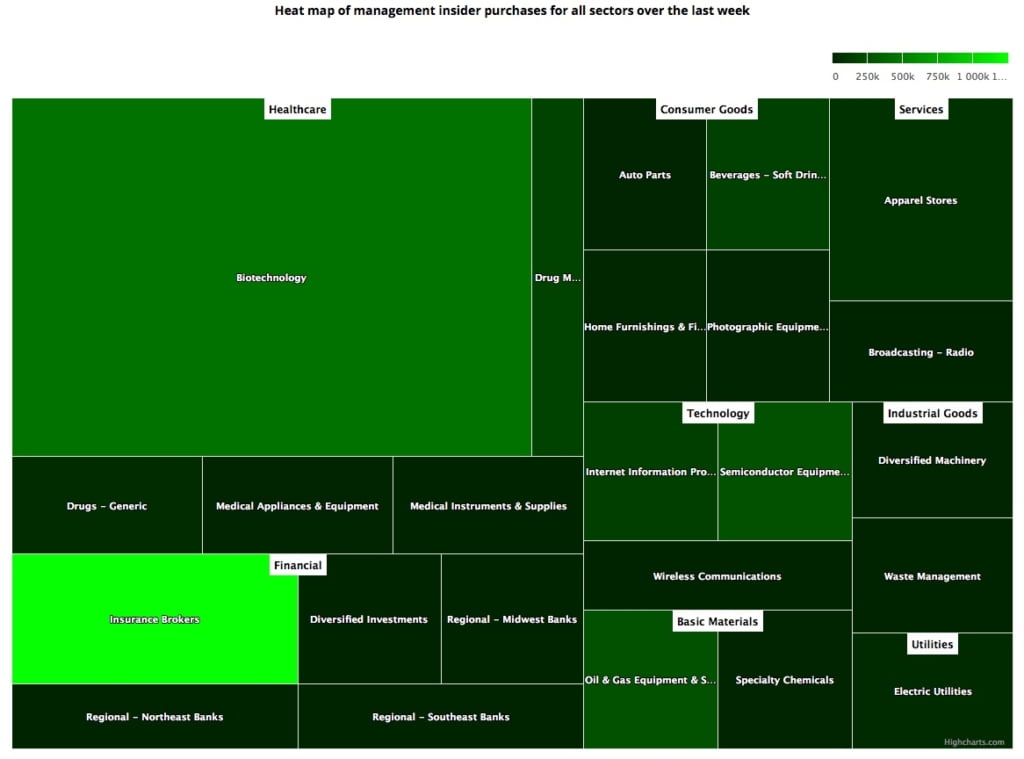 Director Charles Heilbronn acquired 243,849 shares of this beauty products retailer, paying $241.52 per share for a total amount of $58.89 million. These shares were purchased indirectly by Mousseluxe SARL.

The CEO, Mary Dillion, also acquired 1,300 shares  the week prior.

The stock dropped nearly $100/share on a single day on August 30th after the company reported Q2 results that missed on both the top and bottom lines despite revenue growing 12% year-over-year to $1.67 billion. Same store sales increased an impressive 6.2% in a weak retail environment, significantly better than competitor Sally Beauty Holdings’s 0.6% global same store sales decline. What hurt the stock the most was the company’s forecast of same store sales increase coming in between 4% to 6% and earnings per share in the range of $11.86 to $12.06 (previously $12.83 to $13.03), including the impact of approximately $700 million in share repurchases.

Despite the recent drop in the stock price, Ulta trades for about 14 times EBITDA compared to under 6 times EBITDA for Sally Beauty. EDITDA margins for Ulta Beauty at 16.66% are only 2.13% higher than Sally Beauty’s 14.54% margins but Sally’s gross margins are significantly higher. Unfortunately Sally is unable to grow its revenue and has a more leveraged balance sheet than Ulta.

We wrote the following about Ulta Beauty in October 2017 following a $25 million indirect purchase by Mr. Heilbronn,

After a multi-year run up that defied the general malaise faced by most retail stocks, Ulta’s stock peaked at almost $315 per share this June before giving up more than a third of its value because the company did not meet analyst estimates for same store sales growth. The last transaction by Mousseluxe SARL was a sale of 900,000 shares at an average price of $229.56 in September 2016. Mousseluxe SARL is an entity owned by the French high fashion powerhouse Chanel, which owned more than 10% of Ulta when the company went public nearly a decade ago. Following this purchase Chanel now owns 3.63% of Ulta.

The company continues to post revenue gains of over 20% each quarter handily beating both revenue and earnings estimates. Same store sales increased 13% last quarter when most retailers were posting either negative same store sales or low single digit gains. With 1,010 stores as of the end of the second quarter and revenue eclipsing $5.3 billion over the trailing twelve months, the law of large numbers could eventually put a dent in their torrid pace of growth. For now the company continues to execute well and it looks like Chanel has enough confidence in Ulta to increase its stake, albeit by a small amount.

You can view the list of recent insider transactions for Ulta Beauty, Inc. here.

Lions Gate has been on my mind for the last several weeks and it is good to see Dr. Rachesky purchase shares. His timing in buying Lions Gate has been very good in the past. I plan to write in more detail about the company for premium members later this week. After a cluster of purchases by the insiders of Lions Gate last December at much higher prices, we wrote the following about Dr. Rachesky,

This purchase by Mr. Rachesky after Lionsgate stock declined more than 58% over the last year caught my eye. Dr. Rachesky, has held a stake in Lionsgate since 2005 and has served on the board since 2012. Business Insider wrote an interesting article about his Lionsgate stake in 2009 and called him Carl Icahn’s ex-protege.

You can view the list of recent insider transactions for here.

Director Ronald O. Perelman acquired 50,000 shares of this gaming company, paying $20.42 per share for a total amount of $1.02 million. These shares were purchased indirectly through a trust.

You can view the list of recent insider transactions for Scientific Games Corporation here.

You can view the list of recent insider transactions for Chewy, Inc. here.

Director Lorenzo J. Fertitta acquired 25,000 shares of this resorts & casinos company, paying $19.47 per share for a total amount of $486,867. These shares were purchased indirectly by Fertitta Investment LLC.

We wrote the following about the purchases of Red Rock Resorts by the Fertitta brothers last month,

This is the third week in a row purchases by the Fertitta brothers, Frank and Lorenzo, made our top 5 list. With this latest purchase they have bumped up their stake in the company to over 47.12 million shares representing 67% of total shares outstanding.

Red Rock Resorts (Station Casinos in a former life) went public in April 2016 at a price of $19.50. The Fertittas started buying stock this August after the stock dipped below $19. Despite a recent bounce back from levels the stock had not seen since its IPO, the stock is still down 36% over the last year thanks to a string of earnings misses during the last four quarters.

You can view the list of recent insider transactions for Red Rock Resorts, Inc. here.

COB and CEO Mark Zuckerberg sold 550,484 shares of Facebook for $177.62, generating $97.78 million from the sale. These shares were sold indirectly by various entities.

You can view the list of recent insider transactions for Legacy Housing Corporation here.

Shares of this banking software company were sold by 3 insiders:

You can view the list of recent insider transactions for Q2 Holdings, Inc. here.

You can view the list of recent insider transactions for RealPage, Inc. here.

You can view the list of recent insider transactions for Reata Pharmaceuticals, Inc. here.