Merger activity increased last week with six new deals announced and one pending deal closing. You can find all the active deals listed below in our Merger Arbitrage Tool (MAT) that automatically updates itself during market hours.

There was an interesting insider purchase at Mellanox Technologies (MLNX) last week that we wrote about yesterday. Director Steve Sanghi acquired 20,000 shares of this semiconductor company, paying $110.54 per share for a total amount of $2.21 million. Nvidia (NVDA) is in the process of acquiring Mellanox Technologies in an all cash deal valued at $125/share. The big discount to the deal price is partially on account of concerns China might hold up the deal like it did with Qualcomm’s acquisition of NXP Semiconductors (NXPI).

Mr. Sanghi has been the CEO of Microchip (MCHP) since October 1991 and joined the board of Mellanox in February 2018. This purchase is his one and only purchase since he was appointed to the board of Mellanox. Microchip completed its acquisition of Microsemi in May 2018 and from what I recollect the deal traded at a large spread shortly after it was announced because of concerns that China might hold up that semiconductor deal.

Mr. Sanghi probably knows a lot about antitrust approval for semiconductor deals and especially the risk a deal faces on account of Chinese opposition. The spread on the Mellanox deal narrowed a little to 11.96% on Friday after this insider purchase was filed. It is possible that the narrowing of the spread could have just been because the iShares PHLX Semiconductor ETF (SOXX) was up more than 1% on Friday rather than the market reading much into Mr. Sanghi’s purchase. 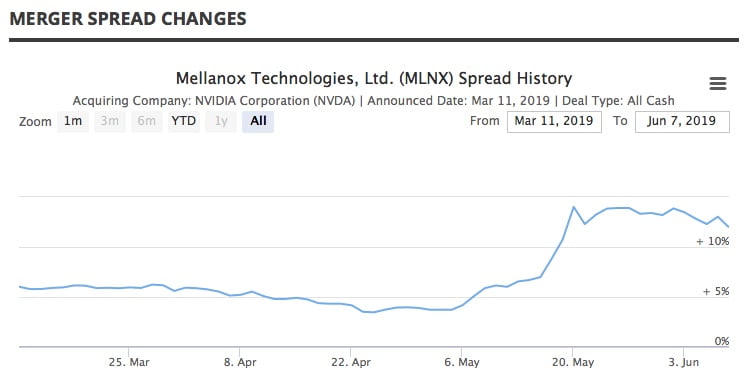 There was one new deal announced in the Deals in the Works section.

Disclaimer: I hold long positions in Red Hat (RHT), Celgene (CELG), Bristol-Myers Squibb (BMY) and Finisar (FNSR). Please do your own due diligence before buying or selling any securities mentioned in this article. We do not warrant the completeness or accuracy of the content or data provided in this article.

Insider Weekends: Luxury Brands On The Cheap
Premium Post: An Update On The Pacific Biosciences Acquisition By Illumina