Happy Holidays and welcome to edition 444 of Insider Weekends. If a Santa Claus rally was supposed to materialize this year, it has yet to happen and the S&P 500 once again declined for the third week in a row. The pace of selling accelerated with a 7% drop last week. There could be various reasons for this market correction ranging from the fed raising interest rates, fears of default from leveraged companies, trade wars, the partial government shutdown, a big drop in oil hurting energy companies, tax loss harvesting and forced liquidation of some hedge funds. An investor I know mentioned that the current market situation has presented opportunities that makes it feel like “shooting fish in a barrel”. The aftermath of the 2008-2009 bear market certainly felt that way but I don’t think we are there yet right now. I do see some interesting opportunities and started nibbling on two new positions last week.

Insiders often step up their buying during market corrections and they could provide signals about companies worth exploring during this downturn. Since we are in the quiet period before the end of the quarter and earnings season, the overall buying has not been as aggressive as I would have expected but insider buying was significantly higher last week compared to the same period last year. Insider buying increased last week with insiders purchasing $209.15 million million of stock compared to $205.39 million in the week prior. Selling on the other hand declined sharply with insiders selling $513.22 million of stock last week compared to $809.7 million in the week prior.

Sell/Buy Ratio: The insider Sell/Buy ratio is calculated by dividing the total insider sales in a given week by total insider purchases that week. The adjusted ratio for last week dropped to 2.45. In other words, insiders sold more than 2 times as much stock as they purchased. The Sell/Buy ratio this week compares favorably with the prior week, when the ratio stood at 3.94. This is the lowest Sell/Buy ratio we have seen in nearly 20 months. 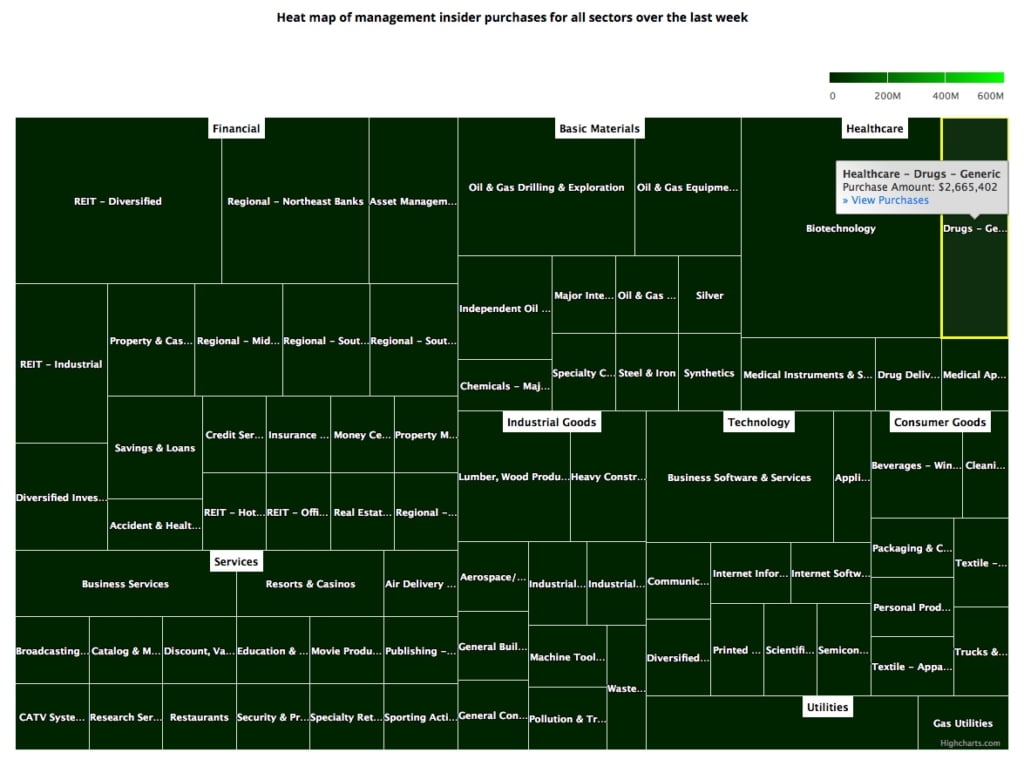 Shares of this pharmaceutical company  were acquired by 3 insiders:

You can view the list of recent insider transactions for The Medicines Company here.

Shares of this movies and TV shows production and distribution company  were acquired by 3 insiders:

This purchase by Mr. Rachesky after Lionsgate stock declined more than 58% over the last year caught my eye. Dr. Rachesky, has held a stake in Lionsgate since 2005 and has served on the board since 2012. Business Insider wrote an interesting article about his Lionsgate stake in 2009 and called him Carl Icahn’s ex-protege.

We wrote the following about an insider purchase by Mr. Crawfoot in April 2015,

This was an interesting purchase for multiple reasons. I have written about Lions Gate and have invested in the company in the past when it was trading in the high single digits. Unfortunately I did not hold it long enough to realize a nearly 5 fold increase in the stock that Carl Icahn’s ex-protege Mark Rachesky realized from his purchases back in 2011. Mr. Rachesky has started taking some profits off the table with a 10 million share sale this week generating $316 million from the sale.

Even as Mr. Rachesky is selling stock, veteran media investor Gordon Crawford is increasing his stake in Lions Gate. Mr. Crawford joined the board of Lionsgate in February 2013. He retired after nearly four decades with the asset management firm Capital Group that manages approximately $1 trillion in assets. The LA Times wrote an interesting article about him around the time of his retirement in December 2012 that is well worth a read.

You can view the list of recent insider transactions for Lions Gate Entertainment Corporation here.

Director Ronald O. Perelman acquired 600,000 shares of this gaming company, paying $15.27 per share for a total amount of $9.16 million. These shares were purchased indirectly by MacAndrews & Forbes Incorporated.

You can view the list of recent insider transactions for Scientific Games Corporation here.

Shares of this oil and natural gas producer were acquired by 5 insiders:

You can view the list of recent insider transactions for Chesapeake Energy Corporation here.

Shares of this diversified animal health and mineral nutrition company were acquired by 2 insiders:

You can view the list of recent insider transactions for Platform Specialty Products Corporation here.

Shares of this software-as-a-service (SaaS) provider were sold by 4 insiders:

You can view the list of recent insider transactions for salesforce.com, inc. here.

You can view the list of recent insider transactions for Live Nation Entertainment, Inc. here.

Co-CEO & Co-President Carl H. Lindner sold 109,768 shares of this insurance company for $91.09, generating $9.99 million from the sale. These shares were sold indirectly through a trust.

You can view the list of recent insider transactions for American Financial Group, Inc. here.