The insider Sell/Buy ratio is calculated by dividing the total insider sales in a given week by total insider buying in that week. The adjusted ratio for last week dropped to 12.51. In other words, insiders sold almost 13 times as much stock as they purchased. The Sell/Buy ratio this week compares favorably with the week prior when the ratio stood at 22.04. We are calculating an adjusted ratio by removing transactions by funds and companies and trying as best as possible only to retain information about insiders and 10% owners who are not funds or companies. 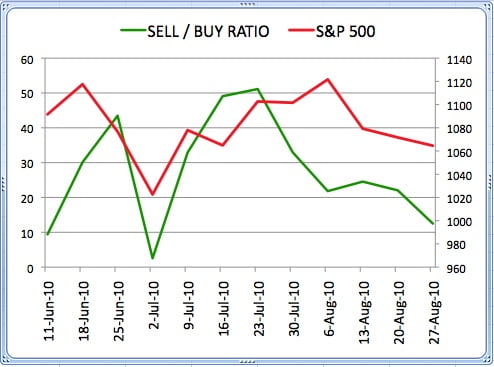 Shares of this general commercial printing company were purchased by two insiders:

These are significant purchases by both the CEO and the CFO. The CFO tripled his stake from 5,000 shares to 15,000 shares with this purchase. CEO Joe Davis also purchased $7.6 million of CGX stock on May 12, 2010 and the stock jumped 19% the following day. When I sent my daily insider purchasing update to Special Reports subscribers on Friday, I wrote “Given the current state of the market, I expect reaction to be more muted this time but still expect the stock to trend higher in coming days.” Reaction was indeed muted this time but the stock still shot up nearly 7% on Friday.

Shares of this bank holding company were purchased by five insiders:

These purchases were part of a private offering. Two directors purchased nearly $1 million of stock. Both of them own more than 10% of the company following this offering. I normally tend not to include offerings like these but the amount purchased by the directors for this regional bank with a market cap of just $27 million, made the purchase noteworthy.

Shares of this diversified communications services provider were purchased by six insiders:

All the purchases were at $1.05, which made me wonder if these purchases were part of a stock offering. I could not find any information about an offering but at $2 million, this purchase is not significant for a company with an Enterprise Value of $7.54 billion.

Update: A reader pointed out that the shares were sold by the company’s CEO on August 25 to other directors in a pre-arranged transaction

Director Frederic Poses acquired 40,000 shares of this diversified electronics company, paying $25.49 per share for a total amount of $1.02 million

Director Harold Hamm acquired 60,000 shares of this oilfield service provider, paying $16.7 per share for a total amount of $1 million.

This purchase by Mr. Hamm is interesting because his previous purchases were during the height of the financial crisis in March and June 2009 when the stock was trading at a small fraction of its current price.

Director David Abrams sold 883,801 shares of this wireless communications tower company, for $40.99 per share generating $36.23 million. These shares were sold indirectly through funds and this was the fourth week that CCI has shown up on our list. Despite a very rich valuation, investors have continued to bid this company higher with the stock up nearly 10% over the last month even as the S&P 500 is down more than 3%.

Chairman of Exec. Committee Scott Cook sold 300,000 shares of this technology and application software services provider at $42.78 per share, generating $12.83 million. These shares were sold indirectly through a trust. A number of other insiders also sold Intuit stock but those sales were as a result of exercising options.

Two insiders sold shares of this Software as a Service (SaaS) provider:

A number of other insiders including CEO Marc Benioff also sold stock but those sales were either part of a scheduled 10b5-1 plan or as a result of exercising options.

Shares of this lawn and garden care products company were sold by four insiders:

These shares were sold indirectly through Hagedorn Partnership.